by Daniel Rottenstreich on December 16, 2008 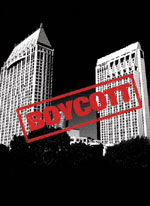 In Monday’s edition of the San Diego Business Journal, reporter Connie Lewis revealed that the ongoing boycott of the Manchester Grand Hyatt by gay activists and labor groups has cost the hotel $2.4 million in canceled meetings and conventions.

Since July, when it was learned that Manchester donated $125,000 to Proposition 8, a Nov. 4 ballot measure that would have banned same-sex marriage statewide, UNITE-HERE Local 30 has held protests weekly in front of the 1,625-room Manchester Grand Hyatt San Diego. Hotel Marketing Manager Kelly Commerford said union protests have cost the hotel $2.4 million because of canceled bookings, in conjunction with meetings at the property or the San Diego Convention Center.

Organizers of the boycott have declared San Diego a central place in the marriage equality struggle in California and throughout the nation. Boycott organizers are demanding that Hyatt repudiate Manchester’s contribution. They argue that because of Hyatt’s notable ‘gay-friendly’ marketing strategy, the boycott is of particular importance.

“Many businesses and corporations that market to the GLBT community contributed generously to the No on 8 campaign, but Hyatt was not among them,” said Cleve Jones, GLBT organizer with the union UNITE-HERE, founder of the NAMES Project/AIDS Memorial Quilt and one of the leading personalities portrayed in the Focus Features film, Milk. “While we demand change in state capitols and in Washington on marriage equality, we cannot tolerate injustice and inaction in our backyard. Hyatt still earns millions from its relationship with Manchester. That is hypocritical and wrong.”

Lewis’s story comes on the heels of several recent actions at the Manchester Hyatt, including a hundred person march, as well as an Equality Illinois community forum held about the boycott in Chicago. Of the many boycotts launched before and after the vote on Prop 8, the boycott of the Manchester Hyatt is the only one that has made a significant financial impact and is growing stronger.