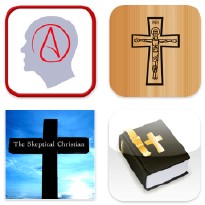 It’s ironic that Christians even use technology, such as cellphones and computers, let alone washing machines and microwaves, since it wasn’t that long ago that their churches were condemning science and everything it wrought, including medicine.

These days, Christians are not only using modern technology, they’re creating apps for it. As in software for the iPhone that helps them continue in their beliefs when confronted with the rational world around them.

Atheists aren’t far behind. We, too, have our own apps that explain in logical terms why the Bible and the tenets of Christianity are about as credible as a Disney fairy tale.

It’s become a war of apps. Christians have their “One-Minute Answers to Skeptics” and “Answers for Catholics,” while atheists are downloading “The Atheist Pocket Debater” and “BibleThumper” from the iTunes store.

The latter app is billed as the “perfect Atheist bible companion,” according to promo materials. “Next time one of those bible thumpers starts proselytizing, you will be able to answer in kind with the juiciest quotes straight from the holy bible.” There’s so many silly, irrational, bloody, crazy quotes to choose from, such as Psalms 137: “Happy shall he be, that taketh and dasheth thy little ones against the stones.”

And you thought that killing kids was immoral! Or that old English was out of fashion.

“The Atheist Pocket Debater” is a more comprehensive app for arguing with those stubborn believers. It contains three sections, Skepticism, Humanism and Atheist Debater. Topics include “Lack of Historical Evidence for Jesus,” “America Was NOT Created as a Christian Nation,” and “God Is Too Hidden to Be Real.” Seems like every atheist will find something useful in this app.

Its creator, Jason Hagen, whom the New York Times describes as an “average guy” from Queens, came up with the idea for the app after buying an iphone and finding nothing for atheists.

“I know what people go through, growing up in the culture I grew up in,” Hagen, the son of a fundamentalist preacher, said. “So I tried to give people the tools they need to defend themselves, but at the same time not ridicule anybody. Basically, the people on the other side of the debate are my parents.”

There’s more, many more apps, far too many to cite in this article. Two of interest: for those who like to quote others, there’s “mAtheist,” which contains 700 bits of wisdom from “the world’s best known freethinkers,” and “Atheist,” which includes over 200 quotes from disbelievers such as Freud, Daniel Dennet and Sam Harris.