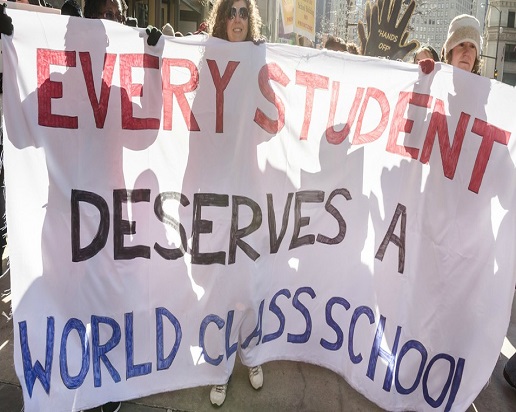 The plaintiffs in the case, Vergara v. California, have powerful backers and Judge Treu’s decision in their favor could have far-reaching implications. The case was filed by Students Matter, an advocacy group created by a Silicon Valley fiber-optics multi-millionaire named David Welch, and the decision has brought loud cheers from Obama’s Education Secretary, Arne Duncan, as well as from various conservative groups, hedge-funders, and other advocates of tying teachers’ jobs to student test scores. Welch and his allies have said they plan to challenge tenure in other states. But was the judge right?

The case itself, which was brought on behalf of nine minority plaintiffs, was weak. No evidence was presented that any of the plaintiffs had teachers who were “grossly ineffective.” None of the teachers in question had negative evaluations. One student referred by name to a “bad teacher” who had in fact been named Pasadena’s teacher of the year. Two of the nine students were enrolled in charter schools, where teachers have neither tenure nor seniority. The Vergara sisters—after whom the case is named—attend a “pilot” school in Los Angeles where teachers may be dismissed for ineffectiveness.

The theory behind the case is that differences in test scores can be largely attributed to the quality of the teacher. Students who have “great teachers” will get high test scores year after year, which means they are more likely to go to college and earn a higher lifetime income. Even one such teacher, so goes the theory, can have this remarkable effect on students. On the other hand, said one of the expert witnesses cited by the judge, one bad teacher can cause students to lose an entire year of learning.

In fact, however, researchers overwhelmingly agree that family income and family education are the largest determinants of academic performance. Only a few months ago, the American Statistical Association said that teachers account for only between 1 percent and 14 percent of the variation among students in test scores. “The majority of opportunities for quality improvement,” said ASA, “are found in the system-level conditions”—that is, variables such as resources, class size, school leadership, the quality of the curriculum, and other factors that are mostly beyond the control of a single teacher.

In the Vergara case, the California Teachers Association called its own expert witnesses who endorsed this finding. According to these witnesses, the primary cause of variation in test scores is poverty, the effect of which is deepened by inadequately-funded schools. Persistent budget cuts mean that schools have larger class sizes, lose their arts teachers and programs, and are less likely to have a school nurse, counselors, psychologists, and a library with a librarian.

During the Schwarzenegger era in California, public schools had billions of dollars taken away from them through budget cuts, and California now ranks at the very bottom of states in per-pupil spending on education, providing 30 percent less funding than the national average.

But Students Matter has no interest in increasing resources for schools. Instead, it is one of a number of groups funded by wealthy hedge-funders and business executives that are now spending millions of dollars to attack teachers. In the Vergara case, Students Matter spent nearly $3 million on a top-flight legal team and a public relations firm before the case had even gone to trial.

Judge Treu, who was appointed by former Republican governor Pete Wilson, endorsed the theory of the plaintiffs’ lawyers. He asserted that the evidence of the effects of “grossly ineffective” teachers “shocks the conscience.” Thus he believed he was defending the civil rights of minority students by striking down laws that made it difficult to remove such teachers.

The judge also struck down seniority, which is popularly known as LIFO, or “last in, first out.” Seniority becomes important when layoff notices are sent out, which has happened many times in California because of repeated budget cuts. LIFO is painful for young teachers, but in the absence of some sort of seniority protections, veteran teachers will be the first to go because they have the highest salaries. A regular purge of experienced teachers will not benefit schools or children. It is impossible to imagine that schools stripped of experienced teachers will produce better education for minority students.

Sadly, the case missed the opportunity for reforms that might actually improve the quality of California’s schools. Tenure was first created by government reformers to eliminate the practice of replacing teachers with politically-connected hires and to protect teachers from being fired for capricious reasons, such as their race, religion, or political views. Unlike higher education, where tenure is close to a guarantee of a lifetime job, tenure in K-12 education is a way of insuring due process. It means that a teacher with tenure cannot be fired without a hearing before an independent arbitrator. However, California has an unusually short probationary period before teachers are granted tenure. The decision must be made in mid-March of their second year of teaching. That is far too soon for teachers to demonstrate that they deserve the protection of tenure. In most states, tenure is not awarded until the teacher has taught for three or four years. Some of California’s teacher organizations have asked to lengthen the probationary period to three years but until now they were ignored.

The California Teachers Association has vowed to appeal the Vergara decision. But the ruling and the attention it has received have already distracted from the genuine inequalities that harm minority children. It does not address overcrowded classes, the elimination of arts programs, or the lack of resources for basic needs, including libraries, librarians, counselors, after-school programs, and nurses. Nor does it address segregation or poverty, both of which are root causes of poor academic performance.

It pretends that great teachers will magically appear after principals gain the power to fire teachers without the necessity of hearings. But inner-city schools already have high teacher turnover and difficulty attracting well-qualified teachers. What’s needed most in schools that serve the poorest children is adequate resources, a full curriculum, and a stable, experienced staff. The Vergara decision will do nothing to improve working conditions, to attract better qualified teachers, or to increase the resources available to the neediest children.

This piece first appeared in the NY Review of Books