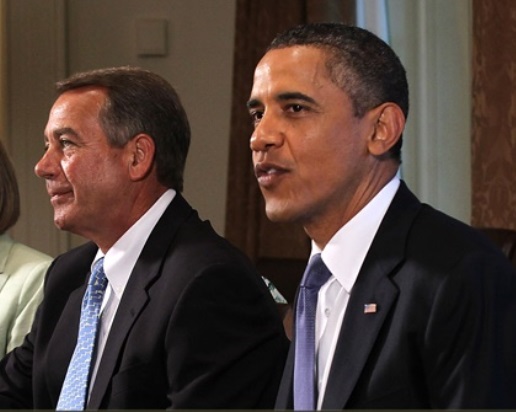 With the Democrats suffering substantial losses in the 2014 midterm elections, it is likely that the advice from pundits and political journalists will be the same as it always is: Move to the right.

This has been the counsel almost any time that Democrats lose at the polls, rooted in the assumption that when the party veers too far leftward, the public reacts.

The advice is already coming in; USA Today, for instance, used an interview with a former adviser to Ronald Reagan to recommend that Barack Obama deliver a “mea culpa” speech along the lines of Reagan’s 1987 Iran/Contra address. There’s still time, the paper notes, for Obama to “score progress on big issues” if he “launches a concerted effort to build bridges with congressional Republicans.”

More outreach to the GOP is in order, say the pundits—but it’s more than that. Business Insider quoted a “Democratic insider” as saying that “the president has 60 days to clean house, regrow his spine, and lay out an aggressive, centrist agenda. If he fails at any of those, he might as well just start writing his memoir.”

Where to find a model for this kind of “aggressive, centrist agenda”? Many accounts are offering the Clinton years as a recipe for success. As the New York Times reported:

The Obama years have in effect represented a political trade-off: Democrats largely abandoned the more centrist, line-blurring approach of Bill Clinton to motivate an ascendant bloc of liberal voters. That strategy twice secured the presidency, but in the two midterm races it meant sacrificing the culturally conservative districts and states that had ensured Democratic congressional majorities.

While it’s dubious to say that the Obama-era Democratic Party ever really abandoned Clinton-style “centrism,” this conventional wisdom about the Clinton presidency misses some crucial facts. As FAIR founder Jeff Cohen has observed in the LA Times, Clinton’s ideological positioning didn’t do much to help the party: “When Clinton entered the White House, his party dominated the U.S. Senate, 57-43; the US House, 258-176; the country’s governorships, 30-18, and a large majority of state legislatures. Today, Republicans control the Senate, 55-45; the House, 222-211; governorships, 30-18, and almost half of state legislatures.”

One of the more intriguing findings from the 2014 exit polls is that voters overwhelmingly think the economic system favors the wealthy; 63 percent of respondents said so, up from 56 in 2012.

This would suggest that a more vigorous brand of economic populism—often derided as divisive or polarizing—would resonate with voters. Instead, though, various reports suggest the White House seek common ground with Republicans on trade policies—presumably corporate-friendly deals like the Trans-Pacific Partnership.

To be sure, turbulent midterm elections sometimes have set the stage for more bipartisan cooperation. When Democrats lost control of the House and Senate in 1994, President Clinton recalibrated his strategy, reached out to an energized Republican majority and a new House speaker, Newt Gingrich, and succeeded in balancing the budget and passing a welfare overhaul.

You may remember that post-1994 era of “bipartisan cooperation” as the time when the Gingrich-led GOP forced two government shutdowns in 1995 and 1996.

And it’s telling that bipartisanship is illustrated in policy terms by the “overhaul” of welfare. The idea that bipartisanship is exemplified by making life harder for the poor speaks volumes about the attitude of the corporate press corps. When they talk about politicians finally overcoming Washington “gridlock,” these are the policy outcomes they cite as successes.

Who better to pick up the centrist mantle of the Clinton era than Hillary Clinton herself? The Washington Post‘s Anne Gearan contrasted Clinton favorably with Obama, giving a taste of the narrative corporate media is hoping to sell over the next two years:

Clinton has gone public with her disagreement with Obama over his first-term reluctance to arm the Syrian rebels, and is expected to air other criticisms if she becomes a candidate.

That sets up a potential candidacy very much in the centrist Democratic mode that Clinton naturally inhabits, several strategists said: family checkbook issues, job and worker security, women’s pay and healthcare equality, plus a muscular projection of American strength abroad.

Meanwhile, Republicans are getting credit from corporate media for achieving their big win through centrism. Under the headline “Republicans’ First Step Was to Handle Extremists in Party,” the New York Times‘ Jeremy Peters and Carl Hulse wrote of the GOP’s “dogged campaign to purge the party of extremists and regain power in the Senate.”

Next to this article in the print edition of the Times was a picture of Iowa’s Republican Senator-elect Joni Ernst, who believes, among other things, that the UN is engaged in a conspiracy to round up Iowa farmers and force them to live in cities. Yet she doesn’t appear in the Times article about extremist candidates—perhaps she’d been purged.