Mainstream Media: Nothing to Be Proud Of 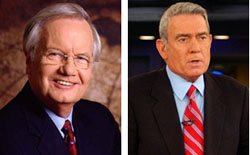 Former CBS anchor Dan Rather admitted that mainstream reporters and editors blew it big time. They failed to expose the Bush administration’s lies for going to war in Iraq: That Saddam Hussein had weapons of mass destruction and that he had a connection to 9/11.

Rather was interviewed as part of Bill Moyers’ 90-minute “Buying the War,” on PBS April 25, a documentary that examines how the press helped Bush and company sell the Iraq war to America.

Rather wasn’t exonerating himself. Shortly after 9/11, the TV icon swore allegiance to the president and the country–on the air. It was not a journalistic thing to do. It was the kind of patriotism that the mainstream press encouraged in those days after the tragedy of the twin towers. Even from its reporters.

Rather told Moyers, “I don’t think there is any excuse for, you know, my performance and the performance of the press in general in the roll up to the war…We didn’t dig enough. And we shouldn’t have been fooled in this way.”

Rather and the other mainstream “journalists” were fooled. Granted, they had the wool pulled over their eyes by some of the most devious politicians to gain public office in a long time. But these journalists refused to question anything the talking heads in the administration told them, even when it was obvious they were being sold a bill of goods. Especially when a simple phone call to a general or a contact in the CIA would have shed doubt on what George Bush and his gang of liars were saying about nuclear weapons in Iraq.

The only exception was Knight Ridder news service. Its reporters did what they were taught in journalism 101: They picked up the phone and found good cause to question the party line. But many of their stories never made it into print in the major papers. Walter Isaacson, former chief at CNN, told Moyers that “we should’ve all been doing” what Knight Ridder did.

Isaacson’s regret comes too late, as does Dan Rather’s. As Moyers points out, Isaacson himself had ordered his reporters to “balance” any coverage of casualties in Afghanistan with mention of 9/11. The Panama City (Florida) News-Herald was told by the powers-that-be in its news room not to put photos of war casualties on page one, because a sister paper had received tons of complaints about its graphic depiction of the carnage.

Even all-so-liberal talk show host Oprah got conned into promoting the administration’s lies. Veteran TV host Phil Donahue was told by MSNBC that he had to have two conservatives on for every liberal. His was the only talk show that featured anti-war movement spokespeople. In post 9/11 America, the media gave little credibility to the peace movement, despite record turnouts at demos throughout the world. Donahue was eventually fired.

It wasn’t a shining moment for America’s mainstream press.

The question now is: Will anything really change? I doubt it. Owned by conservatives and driven by ratings and profits, there’s no hope that America’s mainstream media will ever be anything more than what it is now.

And what it is now, is nothing to be proud of.

Tommi Avicolli Mecca is a radical, southern Italian, working-class queer performer and writer whose work can be seen at www.avicollimecca.com.