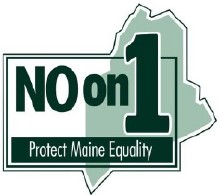 In just 77 days, Maine voters can set the national agenda for marriage equality. The state legislature passed same-sex marriage earlier this year, but now the right has collected enough signatures to put a referendum (“Question One”) on the November 2009 ballot – and has hired the same political consultants who successfully passed Proposition 8. Supporters of marriage equality, however, are determined not to repeat the same mistakes we made in California – and will run an inclusive field campaign with a pro-active and pre-emptive message that (with the right resources) can bring about victory. It does not cost a lot to win campaigns in Maine (only $3 million), and voter turnout is expected to only be about 500,000 people. In other words, the campaign is winnable – but has not yet received the national attention it deserves. While Californians are divided on whether to repeal Prop 8 in 2010 or 2012, they can set aside their differences by helping us win in Maine. If we prevail on November 3rd, it will be easier to take our rights back in California.

The fight for marriage equality has made crucial progress in the past six months – from a court victory in Iowa to legislative victories in Vermont, New Hampshire and Maine. The American Taliban is scared of the inevitable trend toward justice, and views the upcoming Maine referendum as “ground zero” in this battle. Groups like the National Organization for Marriage have already thrown massive resources into Maine, and are taking it seriously. “The side that cares more will win,” said “No on 1” field director Monique Hoeflinger.

The LGBT community is aware that whenever marriage rights have been on the ballot, bigotry has prevailed. Arizona rejected an anti-gay marriage amendment in 2006, but it threatened both marriage and domestic partnerships – and the campaign to defeat it focused on the latter. Two years later, the right put another measure in Arizona that only banned marriage – and it passed by a 13-point margin. In other words, winning a campaign in Maine at the ballot box will change the conversation – and help us repeal Proposition 8.

Everyone knows that defeating Prop 8 was winnable, but our side ran an awful campaign that – like Michael Dukakis – blew a seventeen-point lead. It had a reactive message that did not anticipate or preempt attacks from the other side, failed to run an adequate field campaign that included California’s diverse constituencies, and suffered from an early complacency that led to its downfall. But after meeting some leaders from Maine’s No on One campaign at the Netroots Nation conference in Pittsburgh last week, I am confident they have learned from our mistakes.

A Grassroots Campaign that is Proactive and Preemptive

Unlike in California, where gays and lesbians won marriage rights at the Supreme Court, in Maine the legislature and Governor passed it into law – less than three months ago. It took an intense grassroots lobbying campaign to make this happen, and now the same Mainers who fought for their marriage rights are ready to defend them at the ballot box.

On Election Day last November, marriage equality advocates stood outside polling places in Maine with pledge cards for the legislative campaign. By the time the legislature voted six months later, they had identified 50,000 registered voters who support gay marriage – but what’s interesting is where most of them came from. Lobbying efforts come down to persuading “swing” legislators, and most of them don’t represent liberal communities. Most of the 50,000 identified supporters live in “swing” parts of the state, giving the campaign an advantage to make inroads in places that will decide this election.

Compare this with the “No on 8” field campaign in California, which focused almost entirely on gay neighborhoods in San Francisco and Los Angeles – while ceding the rest of the state to opponents. Mobilizing your base is important (especially in a low-turnout election), but a winning campaign needs to have a visible presence in every part of the state.

“No on 8” also ran a reactive campaign that spent too much time responding to lies that the opposition hurled at us. It was inexcusable to not anticipate the “gay-marriage-will-be-taught-in-public-schools” line, because it’s only been used as an attack from the right in every state that had a marriage amendment. The “No on 1” effort has already planned a TV ad when the other side makes this argument. And unlike in California, where we put a politician on the air (State Superintendent of Public Schools Jack O’Connell) to say it’s not true, the Maine campaign will counter that message with teachers and families.

People of faith have been part of the coalition for years – and are framing support for gay marriage in moral terms. On the day after the California Supreme Court ruled for marriage equality, they had five press conferences throughout Maine lauding the decision. This pro-active show of force actually put the religious right on the defensive. If this is how they plan to run the “No on 1” campaign, it’s an effort worth giving your money to.

Not a Lot of Resources Required

At Netroots Nation, the “No on 1” campaign said they needed about $3 million to win a statewide campaign in Maine (“we’re a cheap date,” they said.) All of us Californians laughed, because we spent $40 million last year only to have our marriage rights taken away. But it’s not just how much money a campaign spends, but whether they use their resources wisely – and when the money comes in. “No on 8” ultimately outspent the opposition, but too much of the funds came in late in the game – when there was a tangible fear of losing. In Maine, it’s important to send a contribution before Labor Day – so the campaign can hire enough field directors that requires weeks of hard work.

Mainers have a “live-and-let-live” approach, but they don’t like outsiders trying to buy the election process. Most of the “No on 1” money has come from Maine residents, in small contributions from supporters of the legislative campaign to pass marriage equality. The opposition has already raised $343,000 – and all but $2,000 from four big donors: $160,000 from the New Jersey-based National Organization for Marriage, $100,000 from the Roman Catholic diocese of Portland, $50,000 from the Knights of Columbus and $31,000 from Focus on the Family Maine. No sign yet if the Mormons are sending in their millions from Utah, but when they do I hope to see more creative YouTube spots like this one.

Finally, the “No on 1” campaign is inviting volunteers to come “vacation” in Maine – where they will put you up in the homes of supporters. Help is especially needed during the first week of October, when early absentee ballots get mailed out. Volunteers should go to the campaign website, and let them know when they plan to visit the state. This will be a campaign mostly run by Maine residents, but unpaid assistance from those passionate for marriage equality are welcome.

In California, gay marriage supporters who plan to repeal Prop 8 at the ballot box are deeply divided between doing it in 2010 – or in 2012. Equality California has endorsed 2012, in part because their donors do not feel confident winning in 2010 is possible. But grass-roots supporters at the Courage Campaign want to try next year. It’s a stupid internecine fight that threatens to hurt the LGBT community, when we should all be working together.

I’m undecided about 2010 or 2012, and am willing to be persuaded either way. But there’s one thing I know for sure – defending marriage equality in Maine in 2009 will make it easier to repeal Prop 8, regardless of what year it gets on the ballot. Californians who believe in marriage equality have a moral responsibility to help out the Maine effort. Depending on my vacation schedule and budget, I plan to fly out there in a few weeks.