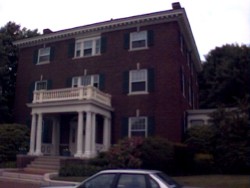 Bishop Richard Malone of Portland, Maine is on a crusade against gay marriage in the northeastern most state in the country. He’s donated $100,000 to help fund a campaign to repeal Maine’s recently enacted gay marriage law. His spokesman, Marc Mutty, is also involved with the effort. In fact, he is on loan from the Diocese.

Malone finds the time and energy to obsess over gay marriage, even though there’s serious trouble in his own backyard. Five churches in his diocese have been forced to close because of deficits and the high cost of maintaining them. Not to mention dwindling Mass attendance.

Despite these economic woes, the bishop has no trouble scraping up dough for his favorite cause: promoting bigotry. It’s a huge slap in the face to the state’s 200,000 Catholics whom he recently urged to tighten their belts and make sacrifices in order to make ends meet, and continue giving to the church.

Of course, Malone isn’t going without: he lives alone in a mansion that has three stories, six bedrooms, four baths, and an 840-foot garage. According to the Portland Press Herald, the place is worth $1,126,000. Taxes on it alone amount to $19,620, which is more than many people live on for a whole year. The estate was apparently purchased by a former bishop in 1939 and is used for social functions, such as entertaining visitors.

The house is funded, as is all diocesan affairs, by a 12% tax on the total income of the state’s parishes plus fundraising efforts conducted by the bishop. It is not known where Malone got the $100,000 for the anti-gay marriage campaign.

The bishop’s harshest critic, Paul Kendrick, who has been hounding the bishop about the church’s handling of priests accused of sexually abusing minors, said, “Bishop Malone wants Maine’s Catholics to cut costs, spend less and do without. Everyone, that is, but him.”

Other bishops have moved out of their palatial homes when the money got tight. Especially when besieged by lawsuits over priestly sex scandals. Cardinal Sean O’Malley of the Archdiocese of Boston got rid of his expensive digs in Brighton and made a bed for himself in the rectory of the Cathedral of the Holy Cross in Boston’s more working-class South End.

Not all parishioners are applauding Malone’s overtly political activities. Armand LaSelva of Kittery, Maine told seacoastonline.com: “I resent getting a bulletin and in it, it takes a stance against gay marriage. That’s not the church’s place. Then you walk out of the church and you have the Knights of Columbus standing there getting people to sign the petition.”

Jack Dougherty, also of Kittery, joined LaSelva in denouncing the church’s political work. He wrote Malone a letter of protest, which said, in part: “I believe you are absolutely wrong in trying to impose ultra conservative, Roman Catholic Church views on the civil law of the state of Maine with regard to same-sex marriage.”

He never heard from the bishop.