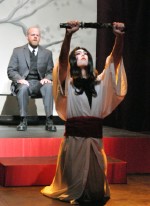 The play focuses on a relationship between a French diplomat, and Song Liling – a man that is employed to pose as a woman. His/Her mission is to get state secrets from the diplomat. Although they have sex, it is oral or from behind. All along the diplomat is not aware that his love is not a woman. M. Butterfly flits around and flirts, but never shows off the body. However, later in the play – he completely disrobes in a dramatic moment.

How an educated man could be fooled for some 20 years without discovering that he had been duped is truly a wonder. Political implications are rampant in this story that makes everyone think about race, gender, sexuality and the mysticism of oriental customs.

M. Butterfly debuted in 1988. The Author David Henry Hwang loosely based the play on the relationship between the real French diplomat Bernard and Shi Pei Pu, a male Peking opera singer. Females were banned from appearing in the Beijing opera. Female roles — were played by males.

This Butterfly is Gorgeously staged by the Custom Made Theater (Gough & Franklin street). The play, as written is a little scattered – but it certainly keeps you interested. The fantastic lighting brings even more drama to the already intriguing evening. The actors gave the kind of exhilarating performances that you would expect to see on Broadway. The entire evening was astonishing.

Poster from “Rubber” the Movie

Well, you can’t wear them – so the next best thing is to run from a rampant Rubber Tire that has telekinetic powers. The “Rubber” has a hard-on for anything that moves or gets in his way. So with his unusual powers – he kills everything in his path – humans, animals and car engines. Bizarre yes … but I can guarantee you that this movie will be the next big ‘Cult’ movie. It’s a wonderful joke on Hollywood and their excesses. This French Movie was made in the Hollywood style. There is a lot of originality in the movie – and the creative juices are very evident.

The brilliant opening Monologue will drag you into the desert where we first spot the Rubber Tire as it shakes of the dust of the desert and wobbly ‘Tire’ takes off looking for victims. I will call him ‘Tire’ cause I don’t know what else to call him. The first victim is a poor little desert Squirrel. Keep in mind that this is not a serious movie – but a really clever farce. I will say, that a couple of people got up and left the theater when the first kill takes place. This is a movie that you either will love or hate. I surprisingly found it to be very amusing — or at least constantly surprising. The Acting is really good. Most are pretty much unknowns – but they were first rate. There is one funny scene where the cops put a bomb-equipped manikin out to fool “Tire”. What is amusing about it – is that the fake person looks exactly like Angelina Jolie. Another joke at Hollywood? …Or maybe just a coincidence? Tip: Be sure to wear your Rubbers. You never know what ‘Rubber’ will grab next.

‘Potiche’ is based on the original 1977 Barillet and Gredy play. The movie is set in an umbrella factory that has a problem with the Union. The Manager/Owner (Fabrice Luchini) has annoyed his workers so much that they go on strike. He has a heart attack and his wife Suzanne (Catherine Deneueve) takes over for her husband as boss of the factory with the help of Babin (Gerard Depardieu). Not only is this a refreshing, wonderful look at a long-time marriage – the melodrama brings up many references to French politics and the saga of people in power. Deneueve is a stunning presence on the screen. Even the over weight Depardieu still has film magic with that marvelous glint in his eye. Who could resist him? Well, even though they were lovers at one time in this film – Deneueve does resist his charms.

The owner of the factory takes back his place at the factory, which leads to a divorce. Deneueve, the wife runs for public office and becomes the New Evita in the French Village. The film is in French with English Subtitles. “Potiche” is one of the warmest comedies that I have seen in a long time – and it is the best movie to come along in a long time. It’s bitingly funny and burns with passion. I would even go so far to say “Hot!”
Opens at the Clay in San Francisco and The Cinearts in Pleasant Hill on April 1st.

Coming to The Lesher Theatre Center in Walnut Creek in 2012 will be “Sunset Boulevard” the musical. I’ve seen the musical at least four times – and plan to see it again. The musical score is absolutely the most glorious of all musicals. Are you ready for YOUR CLOSEUP?

TENNESSEE WILLIAMS IS BACK TO HAUNT THE AURORA THEATRE with “The Eccentricities of a Nightingale.” Get ready for oversized characters…like a puritanical father and an unstable mother. What else would you expect from Williams? Originally called “Summer and Smoke” – Williams reworked his play and called it “The Eccentricities”. Williams said of the play: “Alma of Summer and Smoke is my favorite character – because I came out so late and so did Alma.” Opening: April 7 — in Berkeley. P.S. I had lunch with T.W. many years ago at a downtown hotel. A really interesting nice man.

AND THAT’S A FAA-LASH SCOOP!