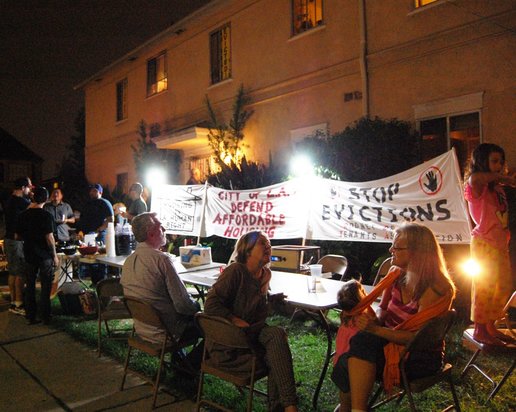 It’s just after dusk on a recent Friday in Los Angeles and already the streets of Los Feliz Village are bumper-to-bumper with the inflow of weekend diners, cocktail loungers and movie- and theatergoers along its main drag, Vermont Avenue.

Apart from being a nightlife hub, the neighborhood boasts highly rated public schools, a very good public library, a still-thriving bookstore and even a good sidewalk newsstand. And they’re all within leisurely walking distance from the single-family Craftsmans, California bungalows and modestly scaled courtyard apartment buildings that line its shaded streets.

Within a stone’s throw of Vermont are is a somewhat nondescript postwar courtyard complex at 1655 Rodney Drive. Though a bit weathered and overgrown on the outside, inside its dozen rent-controlled units are spacious and neatly kept. Its longtime, largely middle-aged gay residents pay around $800 to $1100 a month.

In a city notorious for its atomized sprawl, sclerotically overburdened freeways, neglected public transit and the highest rents in the nation, “the Rodney” is that rarest of anomalies — a comfortable and affordable place to live within an urbane pedestrian oasis.

All that, however, is about to change. After a seven-year lull, Ellis Act evictions are again on the rise in Los Angeles, mirroring the city’s rebounding housing market. And lower-income renters in gentrifying neighborhoods like Los Feliz are finding themselves in the act’s crosshairs.

Enacted by the state legislature in 1986, the Ellis Act allows landlords who want to get out of the rental business to evict tenants without cause. But it has also been used by real estate investors who buy rent-controlled addresses and evict residents so they can flip a property for profit. In Los Angeles alone the law has led to the elimination of over 18,000 units from the city’s inventory of affordable housing since 2001.

For the Rodney, the eviction notices came last January. Tonight, as they have each month since being served by the building’s new owners, Scapa Silverman Properties, the tenants have festooned banners along the building’s heavily trafficked Prospect Avenue façade, strung lights, piped in music and invited guests and neighbors to the monthly Rodney Drive Tenants Association Ellis Protest Potluck Party.

“Save Our Homes. Save Our Neighborhood. Defend Affordable Housing,” a poster taped to a nearby stop sign reads. “Shame on Unethical Landlords,” says another that decorates one of three heavily placarded tents erected in the yard. The decor lends the outdoor gathering the spectacle of a boisterous homeless encampment. Passing drivers honk and pump their fists in approval.

This evening the potluck has attracted around 25 protester-partiers, who drink beer on the sidewalk or eat at one of the cafeteria tables that stretch along the lawn. They include residents from the 43-unit Cove Apartments on nearby Commonwealth Avenue, who are also under Ellis evictions, following the Cove’s sale last May to the Robhana Group real estate investment firm.

Cove tenants Coco and Jason stand in a huddle with Bryan Cassadore of the Los Feliz Neighborhood Council and claim that the new owners have neglected even basic maintenance like changing light bulbs, a refrain heard throughout the evening.

Standing near a well-laden food table, 71-year-old Walt Senterfitt, the bearish, white-bearded chair of the Rodney’s tenants association, holds forth on Ellis. An epidemiologist with the L.A. County Department of Public Health and a veteran of both the civil rights movement of the ’60s and the AIDS battles of the ’80s, Senterfitt is the Rodney’s newest tenant at eight years.

“Our whole struggle has been, we want to fight for ourselves, but not just for ourselves,” he explains. “Because [Ellis evictions are] something that’s affecting people citywide, and it’s just one of the many tools that’s being used to eliminate affordable housing.”

Senterfitt also points to the combination of Ellis and 1995’s Costa-Hawkins Act, which preempted local housing regulations to effectively outlaw strict rent control statewide, as prime aggravators behind the region’s steep homeless rates, which this year spiked to a staggering 40,000 and prompted both city and county leaders to announce emergency actions.

At one table, seated next to Elizabeth Blaney, co-director of the housing and environmental justice organization Union de Vecinos, is longtime Los Feliz resident and 10-year Rodney tenant Roberta Morris. An epilepsy sufferer, Morris  offers that the neighborhood has been an essential lifeline for her and other mobility-challenged neighbors.

“Walkability is really crucial,” she reflects. “If I have any kind of seizure, I’m not supposed to drive for six months until I get it stabilized again. So one of the reasons I was able to stay in Los Angeles and be here is because I was in a walkable neighborhood. That’s a rare thing and somebody from Las Vegas . . . or our landlord shouldn’t be in a position where he can tell me that I can’t live in Los Angeles. That’s basically what the message is: If you don’t have a huge income, you can’t live here.”

As the party begins winding down, much of the talk turns to upcoming actions. Musician Sylvie Shain, a tenant-activist from Hollywood’s now nearly Ellis-vacated Villa Carlotta apartment building, urges the group to support a protest planned outside of a Hollywood Arts Council event at the Villa Carlotta.

And Walt reminds guests of a march scheduled for the sidewalk in front of the Echo Park district offices of State Senate President pro Tempore Kevin de León (D-Los Angeles). The group hopes to take the senate leader to task over his failure to move an Ellis Act reform bill by Senator Mark Leno (D-San Francisco) out of committee last May.

The Rodney tenants have until January 7 to find new housing, though Scapa Silverman has yet to announce what their plans are for the property. Under Ellis, they aren’t required to.