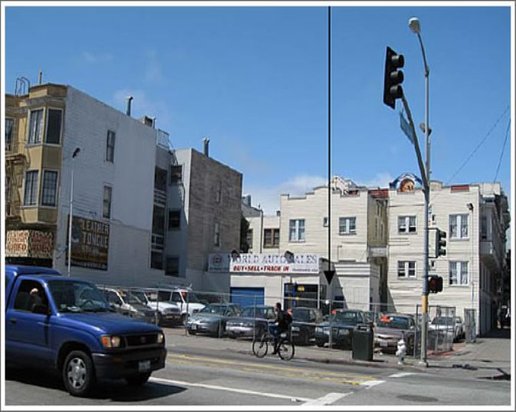 On October 7, 2005 I wrote “New Affordable Housing Engine Needed in Mission.” Contrasting the Mission with the Tenderloin, I stated “whereas the Tenderloin Neighborhood Development Corporation pounces on every available piece of land and moves to build affordable family housing, Mission housing groups sit by while sites are picked up by market-rate developers. It’s not that Tenderloin land is cheaper (it’s more expensive); rather, it’s that the Mission lacks a nonprofit group aggressively acquiring sites for affordable housing.”

I concluded: “The sad fact is that for all the great activists and anti-gentrification groups in the Mission, the lack of an affordable housing engine is killing the neighborhood’s economically diverse future.”

Unfortunately, my fears about the impact of the Mission’s lack of an affordable housing engine proved correct.  Despite tenant displacement, Ellis evictions, and skyrocketing rents going back to the late 1990’s,  until the past year Mission groups failed to aggressively acquire affordable housing sites. The best strategy to preserve the neighborhood’s longterm economic diversity was not implemented.

That brings us to San Francisco’s Prop I. Prop I addresses the imbalance caused by the Mission’s failure to create nonprofit housing for more than a decade by suspending market-rate housing in the neighborhood for as long as 18 months. During this period the city would enact a “Neighborhood Stabilization Strategy” that would promote development that is 33% is affordable to low and moderate income residents and 50% affordable to low, moderate and middle-income households.

Backers see Prop I as calling a necessary “time out” amidst rapid and unanticipated real estate pressures. But Mission activists foresaw this housing imbalance long ago. The problem was that they were more focused on stopping market rate housing than on aggressively acquiring affordable housing sites.

Activists opposed virtually every live-work project in the Mission in the early 1990’s, a time when the city’s economy and housing prices were relatively flat. This opposition intensified during the late 1990’s dot-com boom, when the Mission experienced a major crisis of skyrocketing rent hikes and evictions due to an influx of highly paid tech workers into the neighborhood.

These tech workers wanted to live in the Mission, even if it meant evicting Latino families to do so. New market rate housing became a visible symbol of displacement, even though such units were providing for sale alternatives to Ellis evictions.

Mission activists have fought market-rate projects of any size. While opposition to large, out of scale projects like Bryant Square in 2000 and the “Monster” in the Mission today gets the most attention, activists even battled John O’Connor’s nine-unit project at 700 Valencia Street (at 18th). This fifty foot high project on a parking lot was attacked for allegedly blocking views of the Women’s Building from Valencia Street.

In 2001, in response to a push from the newly elected progressive district elected Board, the Planning Department initiated an Eastern Neighborhood rezoning process. The process stopped most market rate housing because developers could not get financing until the new land use rules were finalized. The process went on far longer than expected and wasn’t completed until 2008. Market rate housing slowed almost to a halt in the Mission for roughly seven years (the approval of the new land use rules coincided with the 2009 national housing financing collapse, delaying construction even further).

This slowdown in market rate housing did not reduce displacement, evictions or rising rents. To the contrary, Ellis evictions remained at a high of over 200 annually during the Eastern Neighborhood rezoning process.

Further, even before the rezoning process was completed the Mission Anti-Displacement Coalition released a report on February 6, 2006 calling for a ban on new market rate housing in the Mission. Citing the negative impacts on the Mission from the “over-production of market-rate housing and under production of affordable housing,” MAC urged the Board of Supervisors to “force the Planning Department” to analyze the cumulative impacts of this imbalance.

In those days, MAC allies Tom Ammiano and Chris Daly represented the Mission. They joined the Board’s other progressives (Peskin, McGoldrick, Sandoval, Mirkarimi, and Maxwell) in passing the Eastern Neighborhoods and Mission Area Plan. If MAC were not satisfied with the Plan, progressives like Ammiano and Daly would not have supported it.

A classic example of Mission housing activists putting opposition to market rate housing ahead of acquiring sites for affordable housing occurred at 3400 Cesar Chavez Boulevard in 2007. MAC (MAC) and Bernal Heights Neighborhood Center (BHNC) teamed up to create an affordable housing alternative to a condominium plan under appeal by the Board of Supervisors. The problem was that they developed a plan not for a site that was actually available for nonprofit housing but rather one that was already under private development.

MAC understandably opposed a project it felt violated neighborhood planning guidelines. But after MAC and BHNC invested resources designing a nonprofit alternative, they did not seek to have the project built elsewhere in the Mission after the condos on Cesar Chavez were approved.

This prioritizing of oppositional politics explains why a moratorium on market rate housing is on the ballot rather than a measure that would increase Mission inclusionary requirements to 25% or even higher; while the latter approach would actually produce concrete affordable housing units for low-income people, it would require constructing market rate projects for the affordable housing to be triggered.

Will Prop I Win?

I analyzed the moratorium’s electoral prospects in May. At the time I thought it only covered projects over twenty units, but Prop I went beyond legislative proposals and suspends developments over five units. This means that rather than simply stopping large “monster” or “beast” projects, Prop I also impacts smaller developers.

Tthe Residential Builders Association would have stayed on the sidelines had Prop I had a 50 unit threshold, but now the group is all in for No on I. Prop I’s chances were far better if it could be portrayed as only going after the big guys, but its backers’ opposition to virtually any market rate projects—even six unit projects and those that are 33% affordable or more—led to a measure that has unified large and small builders as never before.

In “SF’s Mission After the Moratorium,” I concluded “For all the apocalyptic talk about the moratorium “Saving the Mission,” its actual impact on neighborhood rents and evictions is likely to be slight.” Prop I is only the latest move in a two decades of opposition to market rate housing, and it will not be the last.

Randy Shaw is Editor of Beyond Chron. He discusses the role of nonprofit housing acquisition in anti-gentrification efforts in the Mission and Tenderloin in his new book, The Tenderloin: Sex, Crime and Resistance in the Heart of San Francisco