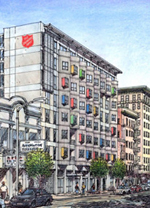 A public opening occurs today for the Ray and Joan Kroc Community Center in San Francisco’s Tenderloin neighborhood. The facility is expected to serve 2000 youth annually, giving young people an alternative to gangs and life on the street. The Center will include a gymnasium, dance studio, weight room/fitness center, and graphic arts studios, and even includes 113 units of transitional and permanent housing. The new Center also offers a physically striking addition to the community. It represents another major breakthrough for the Tenderloin, which recently won a full service post office at 101 Hyde and where new housing developments are underway throughout the community.

Those who have long criticized the McDonald’s mega-empire can feel better knowing that some of the billions earned by founder Ray Kroc are being put to great use. The Ray and Joan Kroc Community Center that opens today in the Tenderloin is one of the many such facilities funded by Joan Kroc’s $1.5 billion donation to the Salvation Army in 2004.

The new facility appears too good to be true.

Tenderloin activists have long sought a facility to provide recreational opportunities for its youth, many of whom live in overcrowded housing and have no safe place to hang out in their buildings. The Salvation Army has now filled this need with a state-of-the-art facility that also provides desperately needed housing for youth exiting foster care and adults needing substance abuse recovery.

Physically, the Center is a striking addition to the 200 block of Turk Street. It is clear that the Salvation Army has spared no expense in building a structure that will not only help thousands, but will also improve a key block in the community.

The Kroc Center opens as a series of improvements are coming to the Tenderloin. A consortium of corporations just committed to raise millions to redesign Boeddeker Park at Eddy and Jones, and Mayor Newsom personally intervened to force major physical improvements in recent weeks at a forlorn corner at Turk and Hyde. The Tenderloin won a full-service post office at 101 Hyde Street, and St. Anthony’s impressive new facility on Golden Gate will open soon.

And on July 24, the state Landmark’s Commission will decide to create the Uptown Tenderloin Historic District, further boosting the community’s positive identity.

The dedication for the Center occurs today at 1:30 pm at 240 Turk Street.