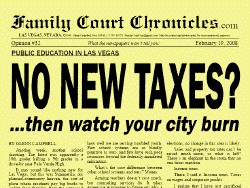 Regardless of what happens at the state level, the San Francisco Board of Supervisors voted 8-3 yesterday to call a special election on June 2nd to avoid a budget catastrophe. It’s the City’s only option, as the Health Department looks at another $100 million in cuts – beyond the $11 million just implemented. But getting a two-thirds majority of San Francisco to pass revenue measures is unlikely, now that Mayor Gavin Newsom has come out against the June 2nd election. Meanwhile, business groups like BOMA flooded the Supervisors’ inboxes yesterday opposing a June election with “new taxes.” We’re seeing a very similar picture at the state level – where Republicans in the legislature oppose any tax increase whatsoever. The state Republican Party may censure any GOP legislator who votes to raise taxes, and radio shock jocks in Orange County and the Central Valley are calling for the ouster of any Republican legislator who breaks the “no new taxes” pledge. It’s easy to complain about “new taxes,” but what happens if the City and state fall off a cliff as a direct consequence of such opposition?

While the Supervisors were debating a June special election yesterday, across the street the Health Commission pondered Mayor Newsom’s request for the Department to cut another $100 million out of its budget. The Department proposed $21 million in cuts to the Commission, which means there’s $80 million to go – besides the $11 million in mid-year cuts that are already going through. In the absence of some revenue solution before June 30th, that’s the kind of devastating cuts we will see.

But Newsom, back from his trip to Europe while the Supervisors pondered solutions, came out yesterday against a June special election. His press spokesman said we need “spending reductions and structural reforms,” and that June is too early to pass some tax increases. So far, the Mayor only has one revenue proposal: sell out tenants by allowing mass condominium conversions of tenancies-in-common (T.I.C.’s) – which will glut the City’s condo market, stoke the appetites of real estate speculators and harbor runaway gentrification.

At the Board meeting, Supervisor Bevan Dufty said the only way to solve the crisis is a “three-part approach”: (a) spending cuts, (b) asking labor unions to give back part of their salary increases, and (c) revenue proposals that can only happen with a special election. The $576 million budget deficit requires all three to happen, which means that everyone must sacrifice. “The reality,” said Dufty, “is we all need to work together.” Countering fears that the City would just tax itself out of the crisis, Board President David Chiu said the possible revenue options would only fill about 15-20% of the projected budget deficit.

But that’s not what you’d think after reading angry e-mails that the Supervisors received. BOMA (Building Owners and Managers Association), for example, sent out a mass alert to its members – urging the Board to vote “no” on a June 2nd special election “for the purpose of raising new taxes.” Others demanded that all tax increases must be passed along with “structural budget reform” – although most of the doable budget reforms the City could pass (e.g., eliminating set-asides) are only possible by a vote of the electorate.

“No new taxes” may be a simple message, but it’s fiscally irresponsible when the City faces a half-a-billion dollar deficit. And the high threshold to pass revenue measures in a special election makes that rhetoric truly dangerous. The City won’t get revenue on the June ballot unless two-thirds approve various taxes, putting way too much power into the hands of a vocal minority. Historically, any serious opposition to a local proposition that requires a two-thirds vote to pass is the kiss of death.

In Sacramento, Republicans in the state legislature – who only control 37% of the State Capitol’s seats – have been pushing “no new taxes” for the last six years. Their entire delegation has signed the Grover Norquist pledge to never support a single tax increase whatsoever, and they refuse to compromise unless the state repeals the eight-hour workday (and other extortions.) And with the Constitution requiring a two-thirds vote to pass a budget, they are dangerous.

Recently, GOP Assemblyman Anthony Adams committed the cardinal sin by suggesting he’d vote for tax increases to partly plug the state’s deficit. Now, two radio shock jocks are demanding his head on a pike. Last week, the vice-chair of the California Republican Party submitted a resolution for their upcoming Convention to censure any GOP legislator who votes to raise any taxes. Clearly, they don’t care if the state falls off a cliff.

When I interviewed Mayor Gavin Newsom about statewide politics last July, I asked him about his commitment to scrapping the “two-thirds” rule that allows Republicans in the state legislature to hold up the budget. “The whole thing’s absurd,” he agreed. “It’s a tyranny of the minority … It’s an embarrassment.” Now, however, local naysayers who oppose a June special election – including the Mayor himself – complain about the City passing “new taxes.”

Of course, opponents at the local level don’t say they’ll never support raising taxes like Republicans in Sacramento. But without the City getting new revenue before June 30th, opposing “new taxes” is the functional equivalent of letting the City suffer unspeakable harm. An $100 million cut at the Health Department? Let’s hope we never go there.