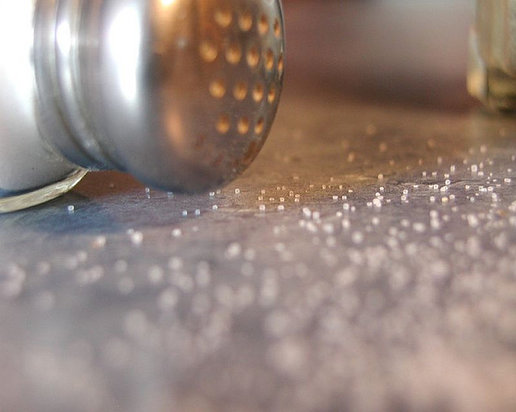 Today we continue our look at the School Nutrition Association’s silliest excuses for rolling back healthy school lunch rules (see last week’s Part 1 and Part 2). As the association’s leaders and members hob-nob with their food industry benefactors in the land of the Great Salt Lake, I thought it would be appropriate to look at SNA’s statements on sodium.

That’s right, SNA is telling Congress that America’s kids are at some risk of harm from reduced sodium levels in school foods. Back in March, while hosting their annual legislative conference here in Washington DC, SNA tweeted the comments of conference speaker Dr. Robert P. Heaney:

Do we want our body to have to continually compensate for low sodium? Or have an intake that is appropriate?

Really? Low sodium is a risk for today’s kids? Not according to the Centers for Disease Control and Prevention (CDC), which have found that 90 percent of U.S. children ages 6-18 eat too much sodium daily.

This is an issue because in implementing the Healthy Hunger Free Kids Act of 2010 (HHFKA), USDA rules required schools to reduce sodium levels in school breakfast and lunch in a step-wise fashion over ten years. Schools had to meet the so-called Target 1 level for sodium during the past academic year; implementation of Target 2 levels is due in 2017-18 and final sodium reductions in 2022-23.

That’s a pretty long time-horizon, and it’s worth noting that it’s less aggressive than what the national Institute of Medicine recommended in 2009.

Still, SNA has lobbied Congress for a rule change that would keep sodium levels at Target 1 indefinitely. And in its recent white paper on sodium targets, SNA says “the ubiquity of sodium in the diet of children” and “the preference for salty foods” creates “substantial challenges” for schools. In other words, don’t ask us to do hard things.

Kids aren’t adults (but they will be someday!)

SNA’s white paper also reviews the scientific literature on sodium intake and health impacts. Many of the studies they cite focus on adults, but they also reviewed some studies that looked at kids. Their conclusion? Children aren’t at risk of hypertension from too much sodium.

The American Heart Association has challenged that notion, but even if sodium doesn’t pose a major health risk during childhood, isn’t that kind of beside the point? After all, children grow up to be adults, who are then at greater risk of diet-related hypertension. And studies like this one show that what people eat as children shapes their taste preferences and eating habits as adults.

Now, who would want to keep those foods in schools? SNA’s corporate sponsors, perhaps?

Karen Perry Stillerman is an analyst and advocate for transforming the U.S. agriculture and food system to one that produces affordable, healthful foods for consumers; reduces air and water pollution; and builds healthy soil for the farmers of tomorrow. She holds a master’s degree in public affairs and environmental policy. See Karen’s full bio.

This piece first appeared in the Union of Concerned Scientists Blog