Little Richard and the Inside Story of a Legendary Drummer

by Peter Michaels and Randy Shaw on September 10, 2015 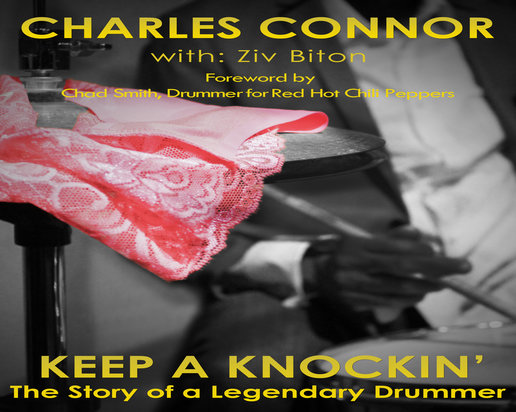 Little Richard was an electrifying international sensation in the mid-1950s.

As young men, the Beatles and Rolling Stones were in awe of Richard Penniman.

Little Richard’s sound was premised on accompaniment by his airtight band, “The Upsetters”, featuring Charles Connor on drums.  Keep A Knockin’, The Story of a Legendary Drummer’ is Charles Connor’s autobiography.

Richard, who grew up in Macon, Georgia, had masses of devotees, wherever he traveled, at a time when international air travel was unmitigated torture:  Japan, Germany, Australia, New Zealand, Hawaii (before it was a state!).  Little Richard’s individual rock legacy is exceeded by few, definitely Elvis P., probably Chuck B., perhaps Jimi H. (perhaps not).

In the beginning, Richard and Charles used to sit together in Richard’s car, driving alongside the railroad tracks, at train speed, windows down, listening intently to the sounds of locomotives, one after another, choogling from the station, gaining momentum, picking up steam, driving hard, driving harder, keeping on.  Charles succeeded by infusing that loco-motion into Little Richard’s music and, more importantly, into the rock and roll lexicon.

Connor was born and raised in New Orleans.  From early childhood, Connor was mesmerized by music in his home town.  Charles always wanted to be a drummer.  His parents were encouraging and supportive.  Charles turned pro in his mid-teens.  Charles traces his drumming sensibilities partly to New Orleans funeral beats, partly to gospel, partly to Professor Longhair (“Fess”), but mostly to Richard Penniman.

Charles was (comparatively) rich and famous before he reached adulthood.  By then, Charles had toured worldwide with Little Richard.  He owned a heart in every port.  Charles was in an internationally renowned movie with Jayne Mansfield (“The Girl Can’t Help It”).  He was an alcoholic.  Charles overcame his alcoholism.  Charles never did drugs.  Little Richard didn’t touch alcohol or drugs.  Richard was always somewhat holy.

Then, Little Richard got seriously holy.  In 1957, at the absolute pinnacle of his international celebrity, Little Richard quit the music racket.  Threw all his jewelry, worth millions back then, from a ferry into an ocean, never to be seen again.  Richard retreated from public life and became deeply religious.

The Upsetters stuck together for a while, and remained successful, but then the band broke up.  With Richard, every single action and reaction, almost every moment of every day, was thrilling, instructive, inspired.  Without Richard, it wasn’t nearly as much fun, even if the Upsetters were backing up big names like Dee Clark, Larry Williams, and “Frogman” Henry.

By 1962, Charles is married, with nine kids to look after.  Drumming becomes less central to Charles’ life.  He is no longer a celebrity, he is an everyday person.  Both fortunately and unfortunately, no more memorable “rock star” adventures for Charles.

Charles remains is extremely likeable.  There is no hint in his autobiography of any resentments or grudges.  Totally upbeat.