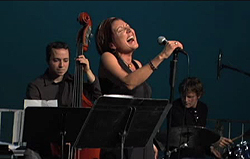 One of my favorite groups from those halcyon days in DC were “The Zimmermans”, fronted by the explosive vocals of “Lisa E“, and featuring the songwriting and guitar talents of Jonathan Spottiswoode, the band made its CD debut in 1994 with “CUT”. Spottiswoode would go on to NYC with his “Enemies”, Engelken would soon make her way to San Francisco and find critical acclaim for her role in the Victoria Theater production of “Hedwig and the Angry Inch”. Engelken would ultimately return to her passion, jazz. Following a triumphant concert at the 2008 San Jose Jazz Festival, Engelken ventured into the studio and produced one hell of a gem, “Caravan“, including a fabulous reworking of Freddie Hubbard’s classic “Red Clay”.

Engelken’s soulful renditions actually remind me of the incomparable Flora Purim, who blazed trails with pianist Chick Corea and her percussionist, drummer and husband, Airto Moriera. You can feel the chemistry between Engelken and Swindells; the subtlety and nuanced rhythms she coaxes from the music and the musicians around her is a rare gift and Caravan captures it beautifully.

The soft openings of “We’ll Be Together Again” makes way for a swinging little number with Engelken scatting and Swindells’ tasty snare and cymbal work. I absolutely loved the horns and clarinet work on “Just One of Those Things”, a New Orleans flavored affair. “Canto de Ossanha” is definitely a Purim-like, Brazilian tune, ably accompanied by the backing vocals of Sariento and Yringoyen.

“Caravan”, the title cut is indeed a revamp of the harmonies and arrangements of Debussy and the British alt-pop band Radiohead, of all people. Only “Lisa E” could conspire to combine those two influences so effectively. Engelken takes a nice turn with the classic “Afro Blue.” The band is tight and the mature approach is about the best I’ve heard any singer attempt.

OK, I’m a freak for funk, so Joni Mitchell’s “Trouble Child” just killed me. Berhman’s muted trumpet and Shulman’s Fender Rhodes took me back to the days of Randy Brecker and Larry Coryell’s Eleventh House. It is perhaps my personal favorite, on an album filled with ass-kicking cuts.

Just when I thought it was safe to go back in the water, Engelken busts out the ever so soft “Winter Moon”. I’m a huge Bill Bruford fan as everyone knows, but I must ask, where are all these amazing British jazz drummers coming from? Swindells’ brush work on this piece is simply gorgeous in its simplicity. It’s what Robert Fripp liked to characterize as “admirable restraint”, and what Dizzy Gillespie called, “playing what you don’t hear”.

“From the Earth” is Engelken’s turn at my favorite Freddie Hubbard tune, “Red Clay”. I actually saw Freddie’s last performance at Yoshi’s with Bobby Hutcherson and Lenny White, the original drummer on the Red Clay album, so I was primed for this version. Engelken doesn’t disappoint. Olmos and Shulman also do a very fine job backing her as well, on trumpet and piano respectively.

“White Wedding”. I always love it when jazz musicians take a beautifully written pop tune and make it come alive, much like Coltrane’s “My Favorite Things” or Miles’ version of Cyndi Lauper’s “Time After Time”. Engelken also shows her versatility and brilliant skill at arrangement on this popular Billy Idol piece.

I couldn’t help but think of Washington’s late, great, grand dame of jazz, Shirley Horn when listening to Engelken’s version of “Detour Ahead”. Like Horn and pianist George Mesterhazy, Engelken and Shulman craft a poignant rendition of the Carter/Ellis/Frigo composition, with a breathless, moody take; a worthy of successor to Shirley’s own version I saw performed many times at DC’s famed Blues Alley.

There have been some fabulous jazz musicians to come from DC over the last decade or so; pianist Geri Allen, bassist Ed Howard, guitarist Paul Bollenback, saxophonist Ron Holloway, to name just a few. They have become some of the most respected and sought after names in jazz. Add singer, composer and producer Lisa Engelken to that pantheon of great artists. “Caravan” will stand the test of time and is a harbinger of more great music to come. Engelken is having her “Caravan” CD release at the Jazz School in Berkeley on Friday, May 7th at 8 pm and planning a tour in Italy.