Life in a Corporatized World 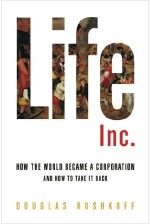 Since the post-WWII industrial boom, writers have sought to assess the impact of this development on people’s lives. In the 1950’s, David Riessman’s The Lonely Crowd, William Whyte’s The Organization Man, C. Wright Mills’ White Collar, and David Sloan’s novel, The Man in the Gray Flannel Suit all explored how the rise of mass corporate culture in the United States shaped character — and not for the better. As the 1960’s created even greater middle-class affluence, a new set of books emerged. Such works as Charles Reich’s bestselling, The Greening of America, and Phillip Slater’s The Pursuit of Loneliness raised doubts about our society’s increasingly money-based values. Both offered alternative value systems that they believed would provide more enriching lives. When I heard about Douglas Rushkoff’s new book, Life, Inc., I hoped that it would provide a valuable updating to the above critiques, one more in line with 21st Century America. While it did not fulfill my expectations, Rushkoff provides many insights of how people are more impacted by corporate values than even they likely recognize.

Writers in the United States have been chronicling the impact of corporations on human behavior and character since at least Henry David Thoreau. In fact, Thoreau’s Walden may still be our culture’s most profound critique of onrushing technology, though the scion of Walden Pond was concerned with the impact of the railroad, not computers or ipods.

Rushkoff traces the rise of the corporation back well before Thoreau, all the way to the Middle Ages. He concludes, as have countless others, that corporations have gained power far beyond their legal and stated purposes, aided in this country by legal decisions giving these profit-driven entities “person” status. David Korten and others have made these points, and Richard Grossman has worked vigorously to reverse corporations’ legal status.

Rushkoff frequently uses a motif whereby an entity thinks they are being anti-corporate when they in fact are not. For example, Rushkoff describes how “even the best-intentioned family foundations often find themselves working against their stated purpose.” He describes how the Gates Foundation was endowed with 35 billion dollars from Bill and Melinda Gates, but notes a Los Angeles Times story that found 41% of the Gates Foundation investments “have been in companies that counter the foundation’s charitable goals or socially concerned philosophy.” Readers will be troubled to learn that these investments include Dow Chemical, ConocoPhillips and Tyco, and Rushkoff concludes, “the Gates Foundation invests significantly more money in the darkest regions of the corporate sphere than it donates to all its charities combined.”

But Rushkoff’s negativity prevents him from either offering alternative paths — which Thoreau, Riessman, Reich et al effectively did — or recognizing when millions of Americans have chosen non-corporate values. One would never know that this book was written during the 2008 presidential season, when hundreds of thousands if not millions dedicated themselves to improving humanity, not making money. Nor do we hear about the millions responding to corporate domination by pursuing a more spiritual path. When I mentioned to Rushkoff that his book offered a surprisingly and, in my view, overly pessimistic view of the current state of the nation, he said that he is typically accused of being too Pollyanish, with one critic even referring to him as a neo-hippy.

Considering the book offers little in the way of solutions — it urges volunteering and promotes alternative and local currency systems, which were a big topic of discussion in Berkeley in the 1970’s — there must be a lot of doleful critics out there.