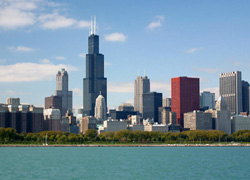 Over 1500 progressive online activists will gather in Chicago today for the start of the four-day Yearly Kos Convention, with many more attending online. The Yearly Kos Convention is named after Daily Kos, a political blog that brings liberal Democratic activists together and has a larger daily readership than most major newspapers. But while the influence of the “netroots” has been felt in national politics, most Daily Kos bloggers – or “Kossacks” – have never met in person. This Convention is an ideal opportunity to network with other online activists, as well as discuss strategies in using the Internet for building progressive change. All the major Democratic Presidential candidates will attend on the Convention’s final day, as well as the party’s Congressional leadership. And to demonstrate how potent this Convention will be, Bill O’Reilly went completely ballistics this week on Fox News in a pathetic attempt to discredit Daily Kos as a “hate site.”

In recent years, the netroots have allowed anyone who has an Internet connection to become a grass-roots organizer and media pundit, drastically changing the dynamics of what can happen in national politics. Five years ago, Markos Moulitsas (or “kos”) was a laid-off dot-com worker and military veteran who started his own political blog. Today he is recognized as one of the leading voices in a movement that works to grow the Democratic Party, and bring it back in touch with the grassroots.

This will be the Second Yearly Kos Convention – and it will be the seminal event where the netroots have arrived. Before the 2006 Elections, a common criticism of the netroots was that most of the Democratic candidates who they recruited and supported did not get elected. But with the victory of Senators like Jon Tester and Jim Webb who would never have made it without the netroots, bloggers are arguably responsible for why the Democrats took back control of the U.S. Senate last year.

This year, Democratic presidential candidates are taking the netroots seriously; all of them concluded that Yearly Kos is an event that they could not afford to miss and will attend. In stark contrast to previous election cycles, none of the candidates attended last weekend’s Democratic Leadership Council (D.L.C.) Convention, a conservative group of business-friendly Democrats who seek to move the party more to the right. In 1992, Bill Clinton won the Democratic Presidential nomination because of the D.L.C.; today, the party’s center of gravity has shifted.

And Fox News, whose lies and distortions helped re-elect George Bush, is so afraid of Yearly Kos that last week Bill O’Reilly convinced Jet Blue Airlines to withdraw their sponsorship of the event. According to O’Reilly, Daily Kos is a “hate site” equivalent to “the Nazis and the Ku Klux Klan,” because of a few strident comments – out of literally thousands – that were posted on the site. But any blog that allows its readers to freely post comments is bound to have the occasional nutcase – a point that was driven home when O’Reilly’s site turned out to have some extremely similar comments.

The Yearly Kos Convention will include over 30 Workshops (including some that train bloggers to run for public office), 32 Roundtables (including the chance to meet the guy who racist Senator George Allen called “macaca”) and over 40 Panels (including members of the Ned Lamont for Senate campaign who will discuss what worked and what didn’t work in the historic race to defeat Joe Lieberman.) There will also be tons of Congressional candidates seeking support from the netroots, a chance to ask tough questions to Nancy Pelosi, Harry Reid and the Democratic Party leadership, and many social activities with the netroots that is bound to be a wild experience.

Just don’t expect me to get much sleep in the next four days.

EDITOR’S NOTE: BeyondChron’s Paul Hogarth is attending Yearly Kos and will provide insider reports on all of the goings on in the days ahead. Send feedback to paul@beyondchron.org