by Peter Cohen and Fernando Martí on September 29, 2014 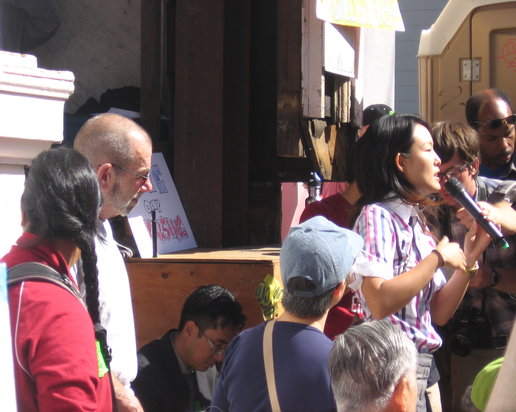 No one needs to be convinced of the current housing affordability and displacement crisis – San Francisco now has the largest income gap in the country, rents are three times higher than the national average, with median rents at nearly $4,000 a month for a two-bedroom apartment, and median home prices hitting the $1 million mark. The City has lost more than 5,000 children and youth over the last decade, with evictions up 170% over this latest “hot market” cycle. The housing market is in truth a hot mess.

There is no single “silver bullet” solution to this crisis, nor simple quick fixes. But we can set out a comprehensive plan of immediate actions to turn that tide. And that is what Proposition K—what we call the Housing Balance measure—is intended to do.

For CCHO, as one of the originators of Prop K along with base organizations in the South of Market, including groups such as SOMCAN and TODCO that have been fighting gentrification and displacement for decades, this measure is part of a working class electoral agenda for San Francisco. We are supporting Propositions G, J, and K on this November ballot: for tenants and neighborhoods, for jobs with dignity, and for affordable housing.

As one part of that vision the Prop K Housing Balance policy and work plan will make City Hall accountable to a number of commitments:

3) Set a minimum one third affordability target whenever the City creates new “plan areas” and rezonings for increasing development, beginning with the Central SoMa Plan to be adopted next year.

5) Establish a funded Neighborhood Stabilization Trust to begin to decommodify housing, acquiring small to large apartment buildings to take them out of the speculative market, preserving them as permanent affordable housing for the tenants who live there.

Since 1990, San Francisco has had a fairly impressive track record of building close to 30% affordable housing– but that ratio is quickly slipping away as new market-rate approvals far outstrip funding for affordable housing. In many parts of our city, this imbalance in housing affordability is opening the door for displacement and gentrification at an unprecedented level, as long-term residents find they can no longer afford to live in their own neighborhoods. The Housing Balance measure, originally developed as legislation for the Central City neighborhoods, was intended to link market-rate development to affordable housing production by setting a goal of at least 30% affordable housing and establishing stricter conditions on approvals of market-rate housing whenever the city fell below this minimum balance. In June, Supervisor Kim seized the moment to extend the reach of the housing balance measure across the entire city, and to consider taking the measure to voters. That provoked an exciting summer of extensive negotiations between the Mayor’s office and Supervisor Kim’s office, resulting in Prop K, which CCHO supported as a pathway to more immediate and substantive outcomes.

Though “compromise” is often considered a dirty word in politics, this measure represents a real win for affordable housing. The new ballot measure and the workplan terms establishes a package of policies and funding to be developed over the next eight months that will set the conditions to reach the 33% minimum housing balance goal.

While an SF Chronicle article last week derided the significance of Proposition K, the critique hinged mostly on the fact that this is a policy measure coming out of negotiations rather than a showdown with the Mayor, and therefore “it doesn’t mean much,” according to the academics interviewed for the article.

That’s an unfortunately over-simplistic conclusion, and fails to appreciate that sometimes less dramatic tactics can be just as useful leverage. Getting the one third Housing Balance commitment memorialized by the San Francisco voters will give the city electorate and the housing advocacy community a mandate to hold the Mayor, and the Board of Supervisors, accountable to those commitments. Supervisor Kim said as much in the Chronicle piece. Sure, it will require persistence and struggle over the next year to turn policy statements into substantive outcomes. It is a clear road map for actions to be taken over the coming year, including potential measures for the 2015 and 2016 ballot, and sets up the conditions for a future Housing Balance. The goal is the same—a minimum one-third citywide affordable/market-rate balance as a permanent standard—it is simply a less politically dramatic pathway to get there.

No silver bullets, no quick fixes. But a vision, a set of voter-backed commitments, and a lot of hard work in the trenches. We see the Proposition K Housing Balance as a measure that constitutes a step towards addressing San Francisco’s ongoing affordability crisis and stabilizing neighborhoods facing rapid gentrification, and we call on progressives of all stripes to support it, win it and own it.