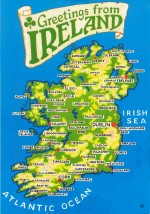 Ireland has taken several steps back into the Dark Ages, thanks to the recent passage of a proposed blasphemy law that makes it painfully clear that there is no separation of church and state in the Emerald Isle.

The law, which went into effect on New Year’s Day, says that blasphemy is committed when a person “publishes or utters matter that is grossly abusive or insulting in relation to matters held sacred by any religion, thereby causing outrage among a substantial number of the adherents of that religion.”

The legislation moved forward, despite overwhelming criticism, after a weaker and less enforceable statute was struck down by the country’s Supreme Court. Because Ireland’s constitution mandates a blasphemy law, legislators had no choice but to either put a referendum on the ballot to eliminate that requirement, or pass a new ban. They chose the cheaper — and not the more reasonable — option. Though if it’s challenged and end up in a court battle, it may not prove to be the cheaper route.

Other such archaic clauses were removed from the constitution by popular vote, including the “special position” of the Catholic Church (1972) and the ban on divorce (1995).

To test the silly new law, Atheist Ireland has posted a number of “blasphemous” statements on its blog. The head of the group, Michael Nugent, said, “Two days ago, there was no question over whether these quotes were legal. Now there is a question, and that is very bizarre.”

Bizarre indeed, considering some of the quotes. Among the 25 “blasphemous quotations,” is an excerpt from Mark Twain’s 1909 Letters from the Earth in which he writes of the biblical Jehova, “He is totally without mercy — he, who is called the Fountain of Mercy. He slays, slays, slays!”

There are also delightful quotes from Tom Lehrer’s “The Vatican Rag,” his 1963 hit which pokes fun at Roman Catholicism, and Randy’s Newman’s great “God’s Song,” in which the guy in the clouds confesses, “You all must be crazy to put your faith in me. That’s why I love mankind.”

My favorite, though, is the excerpt from James Kirkup’s poem The Love That Dares to Speak its Name, originally published in 1976 in London’s now-defunct Gay News. It is narrated by a Roman centurion who is at the crucifixion. As a tomb is prepared for the dead savior, the centurion commits the “unspeakable:” “I laid my lips around the tip/ of that great cock, the instrument/ of our salvation, our eternal joy. The shaft, still throbbed, anointed/ with death’s final ejaculation.”

The poem, which had been testing Britain’s blasphemy laws for three decades, was finally vindicated in 2008 when that country did the right thing and got rid of blasphemy as a criminal offense.