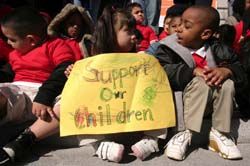 This is the second part of a four part series from Coleman Advocates.

The reality these days is that many of us are overwhelmed by the daily reports of war, relentless violence, and global environmental catastrophes. The news headlines are simply too much to take in.and some people simply tune out. But many of us get up everyday and focus on the concrete problems right in front of us. We take our children to school, work long hours at community-based organizations helping address our communities’ everyday crises, and try to keep our heads up.

But it’s easy to lose sight of the big picture. Our community agencies and child care centers are operating on shoe-string budgets, and have simply grown accustomed to meeting community needs with extraordinarily scarce resources. Once budget season comes around, some service providers turn to the city for help, politely asking for a little more. Agencies serving communities with more than a 50% poverty rate head up to city hall and ask for $50,000. For child advocates, that $50,000 can mean the survival of an entire program. $50K, $100K,even $2 million – it’s all big, essential, and important.

But all this critique of government funding, government jobs, civil service and CBO accountability keeps us from paying attention to the bigger picture. The city’s $5 billion budget is part of a much larger city and regional economy, and too rarely do we ask how one is related to the other. While we fight for a few million dollars in government funds for human services, billions are spent in the private market to build extraordinarily profitable residential developments. So, these major economic forces are working to reshape San Francisco and make it unlivable for most working families. We have to ask – what is the power of government in all of this? What could it be?

City government can help cause – or cure – social problems. With our city’s resources and with our sustained and energetic participation, our city government can be a democratic force for good, to solve the problems that plague us, and not simply give out money for programs and jobs. We can, for example, end child poverty, if we want to.

Look at our wealth. If we were a country, our gross ‘national’ product would be about $112 billion, equal to the industrialized nations of Israel and South Africa. Some of the most expensive real estate in the world is right here in downtown San Francisco. Consider this comparison with NYC: New York City’s population, and its city budget, is ten times the size of San Francisco’s. But the New York City economy is only four times the size of San Francisco’s. We are a major global center of capital and finance, despite our small size.

So the question is: Why, in one of the wealthiest cities on the globe, are there poor children? Why, in a $112 billion local economy, with just over 100,000 children, is there even a single poor child?

Lets raise the stakes and raise the expectations. Lets make the city budget a tool for social change. Lets make democracy work, think big, and demand major public investments in education, job creation and housing and use our wealth to solve social problems once and for all.

In part 3, we’ll take up this question of.how, and with what city revenue? Tune in next week.