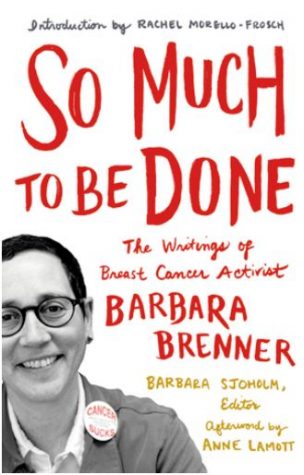 Barbara Brenner’s friends and family have given a gift to activists in all fields with the publication of So Much To Be Done:  The Writings of Breast Cancer Activist Barbara Brenner.  Brenner, who died in 2013, was a well known breast cancer activist. Her journey from civil rights lawyer to health activist began with her own diagnosis twenty years earlier.

But it was not cancer that killed her. Barbara Brenner died at age 61 three years after receiving a diagnosis of amyotrophic lateral sclerosis, or ALS.  The disease is often referred to as Lou Gehrig’s Disease, though Brenner points out that the major league slugger is a poor symbol for the devastating illness that claimed her life.

This book of Brenner’s collected writings is book-ended with a biography by the book’s editor Barbara Sjoholm, an introduction by environmental health-science professor Rachel Morello-Frosch, and afterword by Anne Lamott. The pieces are taken from columns Brenner wrote as Executive Director of Breast Cancer Action and from personal blogs written after her ALS diagnosis. The entries are short – but each packs a powerful punch.

In just a few paragraphs Brenner can dismantle assumptions about what matters in fighting a deadly disease.  Shy she isn’t, going after the sacred cows of the industry –such as breast cancer awareness month and pink ribbons.  And because words matter so much to her in the struggle against breast cancer (cure vs. eradication vs. prevention vs. detection) Brenner’s writing is imbued with careful and precise language. It makes each article and blog posts both easy to read and dense with important information.

Brenner’s organization, Breast Cancer Action (now called BCAction) is perhaps best known for the Think Before You Pink© campaign that Barbara spearheaded.  Designed to look beyond pink ribbons and their promoters to the real causes of cancer, the campaign highlights corporate ribbon-bearers who make products with cancer-causing chemicals and other structural barriers in the fight for equitable treatment and elimination of cancer.  But articles in the book don’t just take aim at corporate wrong-doers. Brenner also explains how unscrupulous actions by breast cancer non-profits forced BCAction to copyright the name of the campaign. The copyright symbol is used whenever Think Before You Pink is used in the book.

In her too-short life, Brenner used her huge intelligence to develop a laser focus on the causes of breast cancer, medical science behind the disease, money raised and spent in the name of the breast cancer, and both the greed and goodness of those associated with the disease. Pieces in the book touch on all these issues.  And they do so with candor and a no holds barred attitude.  As readers will learn, Brenner wanted her obituary to read that “she died after a long battle with the breast cancer industry.” Her May 20, 2013 obituary in the New York Times said just that.

The lessons in So Much to Be Done go beyond Barbara Brenner’s hard-hitting views of the breast cancer industry.  With the ALS diagnosis came insight into illness beyond cancer.  As she navigated the uncharted waters of ALS, Brenner found parallels between the breast cancer she knew so well and the unexpected (and as far as I know unrelated) diagnosis of ALS on the eve of her retirement from a life of activism.

One of her post-ALS posts makes a mockery of the symbols of both diseases – baseball star Lou Gehrig for ALS and the pink ribbon for breast cancer.  Brenner prefers symbols that speak to the devastation of both diseases and the steps activists must undertake to eradicate them.  Surprising to me until I read Barbara’s essay, it is quite possible that Lou Gehrig didn’t even have ALS – but don’t look for that fact in organizations using the symbol to raise money.

The teachings So Much to be Done go beyond the issues of breast cancer and ALS.  As I was writing this review, a friend on Facebook questioned the hype around the July 10 “Disability Awareness Day.”  “Is anyone really not aware of disability?” he asked.  I promptly shared the link to this book, knowing Barbara’s writings on the problems with breast cancer awareness month would provide useful analysis as he thought about his insightful question.

This book is not just a political handbook about how to systematically take on a deadly illness and an industry that has grown up around it.   Brenner’s personal life shines through – the music she loved, Yosemite Valley and other nature settings that nurtured her. And especially her love for her life partner Susie Lampert, who she met while a graduate student in public policy at Princeton University.  Much of the post-ALS writings are posts from a blog that Brenner and Lampert maintained together. And as her illness progressed, it is clear to the reader that a life-long love continued to blossom as fate threw the couple the toughest curve ball there is.

Barbara also deepened her connection to Judaism and spirit as her life came to an end.  She took a Hebrew name and explains why. Talks she gave as a member of her Jewish community in Mendocino, California during the Jewish High Holy Days are included in these writings.  Just as she looked squarely at cancer and ASL, so too she considered death unflinchingly and with gratitude.  Her last blog post begins “As my life comes to an end….”

As a disability rights lawyer who works on accessible technology issues, I was interested in Barbara’s description of how she used assistive technology first to project her voice, and then to talk for her, when ALS left her unable to speak.  It was a reminder that just because the manner in which she expressed herself changed because of the illness, her true voice – the voice that communicated honestly about all she encountered – was not silenced.

One last thing lest readers of this review think So Much to be Done will be too much of a downer, with so much talk of disease and death.  It isn’t, and for two reasons.

First, Brenner is an optimist, a quality she expressly identifies in many pieces. (And a quality she shares with social activist and journalist Helen Keller, who famously said that “Nothing can be done without hope and confidence.”  The optimism is infectious:  I finished the book believing that if only Brenner’s activist ideas were followed, we would make inroads against disease and for equitable distribution of health care resources.

And the book is not depressing because Brenner’s sense of humor peeks out amongst the seriousness of her topics.  Turning her sharp attention to a 1996 postage stamp with a pink ribbon and the back shoulder of a white woman with a full head of hair, Brenner writes “If the stamp didn’t say “Breast Cancer Awareness” along the edge, most people would no doubt conclude that the stamp commemorates either women’s hair fashion or shoulder surgery.”

Humor is just one of the tools Brenner used as she worked to shift the healthcare paradigm.  The world is a better place for her activism.

Lainey Feingold is a disability rights lawyer in Berkeley, California.  Her book, Structured Negotiation:  A Winning Alternative to Lawsuits, will be published by the American Bar Association this Fall.  More on her website at LFLegal.com