Leroy Looper, Visionary Leader of the Tenderloin, Dies at 86 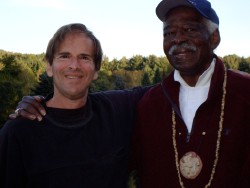 Leroy Looper, whose purchase of the Cadillac Hotel in 1977 led to the revival of the Tenderloin neighborhood and the preservation of the city’s single-room occupancy hotels, died peacefully yesterday at age 86. Looper lived an extraordinary life that saw him leave school after third grade, only to later get his college and masters degrees as an adult. After spending years riding the rails as a homeless hobo, Looper became a drug addict, alcoholic and ex-con before developing landmark programs to help all four populations. Leroy was the towering oak whose branches spawned many of the institutions of today’s Tenderloin, and his restoration of the Cadillac Hotel became the model for what is now described as “supportive housing.”

His wife Kathy noted that “Leroy did everything he wanted to do and then died,” and to his very last breath he was urging his dinner guests to revive educational programs for the poor. I first met Leroy in 1979, and he soon became my mentor. We maintained the closest of relationships until the day he died. I will have a full account of the life and enormous impact of Leroy Branch Looper in tomorrow’s Beyond Chron; in the meantime, you can read his autobiography, serialized in these pages, here: Chapter 1, Chapter 2, Chapter 3, Chapter 4, Chapter 5, Chapter 6, Chapter 7, Chapter 8, Chapter 9, Chapter 10.