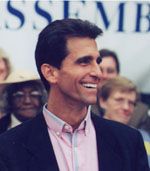 Social change is built at the grassroots, and thousands of activists deserve credit for the Legislature’s passage of a bill legalizing gay marriage. But one person is most responsible for this landmark victory: San Francisco Assemblymember Mark Leno. Leno pushed the gay marriage bill even when Assembly passage appeared unlikely, and he succeeded in moving gay marriage from the margins to the mainstream of the Democratic Party. Leno set in motion a process that has reshaped California politics, and the Governor’s planned veto does not reduce the magnitude of Leno’s accomplishment.

When Mark Leno was elected to the Assembly in a hard-fought race in 2002, he was not widely viewed as a man who would shake-up Sacramento. But he has done precisely that, as the gay marriage campaign is a landmark civil rights initiative that has significantly broadened California’s progressive base.

Leno introduced his gay marriage bill this year after national Democrats, including Senator Dianne Feinstein, attributed Kerry’s defeat to the Republicans use of gay marriage to boost conservative voter turnout. Post-election analyses centered on the need for Democrats to stay focus on economic and class issues, and stay away from gay marriage and other social issues that are said to alienate working-class voters.

While there were those like Molly McKay of Equality California that agreed with Leno’s plan to move a gay marriage bill this year, other advocates thought the Democrats would be better off solidifying their base around the economy, health care, and education. Since Assembly passage seemed very unlikely, Leno could potentially be asking legislators to take a controversial stand on an issue that was not going to pass anyway.

On the other hand, it was clear by early this year that the Christian Right would gather signatures for an initiative imposing a constitutional ban on gay marriage. This meant that the voters would be ultimately deciding the issue, which could make it easier for wavering Legislators to justify voting in favor of the bill (they could argue that the issue was in the voters hands anyway).

So Leno moved forward, but as expected, the gay marriage bill was defeated in the Assembly. Leno then inserted the measure into a Senate bill, so that once the Senate passed it he could take a second stab at Assembly passage in September.

The Assembly Democrats that initially opposed gay marriage primarily came from swing districts that have elected Democratic due to increased Latino voter turnout. Much has been written about the alleged ability of Republicans to use social issues like gay marriage to win Latino as well as African-American votes, and while this factor has been overstated, in the absence of other pressures a Democrat supporting gay marriage could face re-election problems over this issue.

Rather than attack these swing Democrats, Leno went about giving them the political cover they needed. He was able to accomplish this because of a strong personal relationship he formed with Assembly Speaker Fabian Nunez, who entered the Assembly with Leno in 2003.

Leno and Nunez come from diverse regions, and have completely different class, racial, religious and ethnic backgrounds. Yet they quickly forged close personal bonds that paved the way for a breakthrough on gay marriage.

Nunez went to his allies at the United Farmworkers Union (UFW) and got the union and longtime leader Dolores Huerta to endorse the gay marriage bill. If the UFW were backing gay marriage it could hardly be called contrary to Latino families, and this freed legislators like Simon Salinas and Gloria Negrete McLeod to provide the key votes for passage of the bill.

While media accounts have focused on the pivotal yes vote of Santa Ana Assemblymember Tom Umberg, the reality is that Fabian Nunez would not have scheduled a vote on AB 849 were he not assured of the necessary 41 votes. If Umberg had not provided his vote, Nunez would have switched one of the Latino legislators who had planned to vote against the bill.

The fact that former Mayor Willie Brown and the head of the state NAACP were walking the halls to keep African-American legislators on board shows how Leno successfully transformed an issue long identified with white gay and lesbians into a mainstream Democratic Party policy stance.

Ponder this for a moment. An issue long seen as the sole concern of an activist wing of the Democratic Party has now been embraced by the state’s legislative leadership and by Phil Angelides, the Party’s frontrunner for the Governor’s nomination.

That is an extraordinary accomplishment. And Mark Leno, with critical assistance from Fabian Nunez, was the driving force making it happen.

(I have repeatedly mentioned Nunez as a future Governor or US Senator. Those previously unaware of his skills and character now know why he is so highly regarded)

Leno’s pursuit of a gay marriage bill this year has completely altered the political calculus surrounding the issue.

First, it eliminates the longtime argument by opponents that the Legislature has never approved gay marriage.

Second, it has made Governor Schwarzenegger look like a fool. As editorial pages across the state noted yesterday, the Governor’s stated reason for vetoing the bill-that the issue should be resolved by the courts—is instead a reason for signing the bill. The new law would immediately be judicially challenged, while a vetoed bill is not reviewed.

In addition, the Governor’s entire political identify is as a “man of the people.” That’s allegedly why we are spending $50 million on a special election, so that the people can directly dictate public policy.

So why does the Governor want the gay marriage issue resolved not by “the people”-whose interests are represented in the Legislature—but by the undemocratic courts?

Moreover, the Governor announced a veto before he even gave proponents an opportunity to meet with him. Successful politicians don’t make these procedural mistakes, which further explains the Governor’s 34% approval rating.

Third, the gay marriage bill largely removes the issue from the 2006 Democratic Party primary for Governor. Phil Angelides came out strong against the Governor’s planned veto, and regardless of whether Gavin Newsom enters the race, this is no longer an issue that can hurt his chances of winning the primary.

California voters will decide on the future of gay marriage in June 2006. Victory for the ban will require the issue to be resolved by the courts, while a defeat raises the prospect for enactment of Leno’s bill under a new Governor in early 2007.

Finally, the Governor has just done what even the California Teachers Association and California Nurses Association were as yet unable to do: get progressive grassroots activists not connected to labor issues galvanized to defeat the Governor’s ballot measures in November. This could greatly increase voter turnout in San Francisco, and will definitely bring activists across the state into the phone banks and precinct walks that are essential for off-year election turnout.

In one swoop, Mark Leno led a historic campaign for civil rights, created new alliances between gays and Latinos, and put Governor Schwarzenegger into an even deeper political hole. And as everyone who knows him can attest, these successes could not happen to a nicer guy.