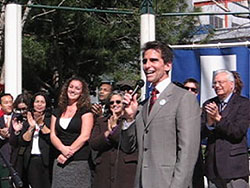 Assemblymember Mark Leno formally announced on March 2 that he will be challenging State Senator Carole Migden in the June 2008 primary. Calling himself “the best candidate for change,” Leno proposed to “reinvent” the office of State Senator by linking progressive constituencies in San Francisco, Marin and Sonoma Counties. In a thinly-veiled reference to Migden, Leno said he was committed to “bringing people together,” rather then “tearing them down or belittling them.” Migden supporters criticized Leno for launching a “divisive” campaign against “the only elected lesbian official from San Francisco.” But having gay candidates run against each other is nothing new, and Leno argued “democracy is best served when voters have a choice.”

It was clear from his March 2 press event that Mark Leno challenges the prevailing view of San Francisco politics as divided between Newsom and Gonzalez factions. Leno has strong supporters in both camps, and has forged an independent political base that may well be the strongest in San Francisco.

Leno’s race against Carole Migden may be the first time in modern San Francisco history that a member of the State Legislature has challenged the seat of another. But Markos Moulitsas of Daily Kos and much of the blogger community have encouraged such primary challenges, believing that it increases political accountability and results in more progressive Democratic politicians.

One reason Los Angeles became a union stronghold was the late Miguel Contreras’ use of the Los Angeles County Federation of Labor to back pro-labor Democrats against incumbent Democrats who were not “warriors” for workers. Had Contreras worried about being divisive, one of America’s great national leaders on labor issues, Congressmember Hilda Solis, would not have run against a Democratic incumbent and would not be in office today.

Some San Francisco activists routinely personalize elections, wrongly downplaying the importance of issues. But the feelings of these political insiders are not those of the electorate, half of whom live in Marin and Sonoma Counties.

These voters do not care which candidate attended which meeting of the Alice B. Toklas or Harvey Milk Democratic Clubs, nor will they be influenced by claims that Leno is being “divisive” by running against the lesbian Migden. Like most San Francisco voters, people will assess whether Leno’s record in state government exceeds Migden’s, and base their vote on which candidate will more effectively represent the district

Tommi Avicolli-Mecca told the Bay Area Reporter last week “Queers have every right to run against other queers…There’s no reason we shouldn’t have more than one LGBT candidate.” As Avicolli-Mecca wrote in these pages on January 22 “queers have run against queers” many times before in San Francisco.

In fact, Migden had no hesitation backing Harry Britt in 2002 after Leno was already a declared candidate for the Assembly. Lesbian Eileen Hansen ran for District 8 Supervisor against two gay men, Bevan Dufty and Tom Radulovich, that same year.

Since Leno began moving toward running in January, Migden has gotten more involved with her district than at any time since taking office in 2005. Migden is beginning to show up at many events where she used to send an aide, and she is clearly in full campaign mode.

Win or lose, Leno’s challenge has already had a positive impact.

And his idea of using a State Senator representing three counties to create multi-county alliances between activists in each county involved with health care, housing, the environment and other issues should prove popular with voters. Pursuing joint projects with Marin and Sonoma will boost San Francisco’s state political clout.

Polling results in an election that is more than a year away is clearly subject to change, but Leno’s numbers look very good. Leno is far ahead of Migden in San Francisco, and is also doing well in Marin and Sonoma Counties despite a lack of name recognition. Expect the Assembly delegation from Marin and Sonoma to back Leno, as he has forged strong personal relationships with these officials.

On March 1, Leno issued a joint press release with Marin Assemblymember Jared Huffman announcing the introduction of AB 1056, which would expand the authority of the California Ocean Protection Council to safeguard the ocean and coastal resources. Huffman is just one of many state legislators who will boost Leno’s candidacy by bringing him in on their own pet issues.

It is unlikely that other State Senators will be out there trying to help Migden. Unlike the San Francisco Board of Supervisors, where those taking iconoclastic stances (like Quentin “the Town Grouch” Kopp) are deemed populist heroes, the State Legislature rewards those who can get along with their colleagues. Migden alienated fellow Senators last year, and I have not heard that she is any more popular with them today.

Migden has a fiercely loyal base, and will surely be helped by being a woman. But Assemblymember Fiona Ma prevents Migden from arguing that her re-election is necessary to ensure female representation in San Francisco’s state delegation. Ma spoke at Leno’s kickoff, as did San Francisco’s other highest ranked woman official, District Attorney Kamala Harris.

Leno’s early announcement gives Migden time to repair frayed relationships and to tell voters what she has done for them in Sacramento. Many strong Migden backers cannot even identify her legislative accomplishments; one would think that this would be the criterion for earning one’s support.

Migden’s staff is likely compiling a list of these accomplishments as we speak. By June 2008, the entire district will know what she has done, and whether she would be a more effective State Senator than Mark Leno for the next four years.

Leno’s emphasis on being present and available to constituents, to listen to everyone, and to treat people “kindly” was a not so subtle dig at an incumbent who is seen by many to exhibit the opposite traits. But Leno’s strongest commitment was to “fiercely and aggressively” advocate for progressive politics, and this race is likely to be decided not on personalities, but on effectiveness.