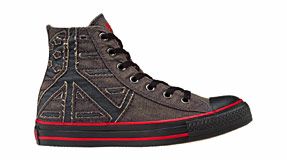 (Ed note: As we commemorate the 25th Anniversary of John Lennon’s death, we learn that his widow Yoko has given Lennon’s image to Nike, with proceeds from the shoe going to a Pentagon-front “peace” group! We are not making this up. Read below)

Nike has launched a range of ‘Peace’ trainers that feature a picture of John Lennon as well as lyrics from his classic track ‘Imagine’. The ex-Beatle’s widow Yoko Ono has given the company the go-ahead to name the shoe after Lennon because the proceeds from sales of the trainers will go to Empower Peace, a US-based charity. The shoe, called the John Lennon Peace Chuck, has been introduced in the US by the Nike-owned Converse brand. It features ‘Imagine’ lyrics on the toe, a reproduction of a Lennon self-portrait on the side and his autograph on the heel. The lyrics read: “Imagine all the people living life in peace.”

The trainer, which Ono helped design, is part of a range called the Chuck Taylor All Star Peace Collection. The Lennon trainer will be the first in a series of annual, artist-designed Peace Chucks. These will appear each year “until global peace is achieved”, according to Converse. A web page converse.com/peace has been developed to help promote the new trainer, which invites users to send “good karma” to their friends.