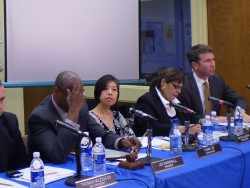 All seven San Francisco Police Commissioners left their City Hall Chambers and traveled to the Bayview on Wednesday, March 31. This visitation was at the adamant behest of SLAM (Stop Lennar Action Movement) whose blast e-mail from “ENOUGH_BVHP@yahoogroups” announced an en masse community mobilization before “those who are responsible for Police Oversight and holding the department accountable for its actions or lack thereof.” In the tightly-packed sanctuary of the Grace Lutheran Church at 465 Woolsey Street at 6:00 p.m., a forceful and articulate community — 150 to 200-strong — answered this call to attend a public airing of “Problems, Concerns and un-addressed Issues that have impacted Bay View Hunters Point and the community.”

Several speakers expressed outrage at an incident on Thursday, February 18, at the 5048 Third Street Center for Self Improvement and Community Development and Nation of Islam Mosque where the Environmental Protection Agency sponsored and funded an address to the Stop Lennar Action Movement (SLAM) members by Atlanta-based scientist, Wilma Subra of the Technical Assistance Services for Communities (TASC). Ms Subra’s power point presentation, available in advance on line, detailed serious deficiencies in the SF Redevelopment Agency/Lennar Draft Environmental Impact Report and plan for “early transfer” of an unremediated, partially cleaned, and highly toxic Superfund site.

During Subra’s presentation, Brother Mark, mosque security, spotted a middle-aged white man taping with a hidden recorder and carrying what turned out to be an unpermitted, loaded fire arm bulging and flashing metal beneath his coat. In the course of questioning, the man gave an assumed name and a false address and phone number. He was later identified as a former Ingleside police officer, now an operative of a security firm hired by Lennar Corporation. Bayview officers were called. They took away the man, but did not charge him. Marie Harrison, Bayview Resident and Greenaction activist, testified that police interviewed no attendee to the meeting besides SFPD officers.

As the Bayview fights for environmental justice using every mechanism at its disposal to save its community and its children from lung-choking dust, heavy metals and radioactive material, the Redevelopment Agency, The City, Lennar and the Mayor seem bent on pushing through this bankrupt and dangerous project by any means possible. The ‘Chronicle’ and ‘Examiner’ for years have spun like tops promoting the program. Two ‘Chronicle’ reporters and one from the ‘Examiner’ have shown remarkable arrogance and condescension toward the Bayview on this issue as they dutifully underwrite this political agenda, minimizing its importance, twisting its facts, expanding partialized truths into exaggerations.

Cote claimed that a “Draft” of a federal report obtained by ‘The Chronicle’ found the project has effective safeguards to minimize asbestos dust exposure. He suggested this “Draft” was leaked to the paper by the EPA. Trumpeted Cote, “The EPA also saw ‘no reason to suspend or stop the construction project,’ which calls for 10,500 homes to be built over two decades in an ambitious effort to transform the city’s southeastern waterfront.”

According to sources, incoming EPA head, Jared Blumenthal knew nothing about any leak, and no one in the EPA had authorized one. Speculation was that Cote was referring, in some distortion of understanding, to the SFRA/Lennar “Draft” EIR. Finally, it was determined that the exciting new “draft” to which Cote referred was, in fact, a dust mitigation study done years before in which Lennar provided the EPA dust mitigation data and information only for their review, asking them to evaluate whether it would or would not work. Lennar Corporation stopped the EPA from doing their own testing and evaluation. The former EPA director told the community, “We didn’t do a study. We analyzed the data that was given to us.” In addition, no scientific peer review was carried out on this “study.”

After months of meetings and a 4,400-page Redevelopment Draft EIR report covering the dangerous Bayview clean-up of a highly toxic superfund site, John Cote’s attempt to boil down environmental issues to one dust mitigation study alone is a vast oversimplification of a multi-faceted environmental problem.

‘Chronicle’ columnists Matier and Ross play off John Cote’s article, referring to the flawed, incomplete, and superficial dust mitigation EPA “draft” report. “For just as long, the local Nation of Islam has objected to the project, maintaining that bulldozers have stirred up unhealthy amounts of asbestos – something both Lennar and city health tests debunk,” while respiratory diseases soar in the Bayview, especially among children.

Cote’s piece quotes Michael Cohen, head of the Mayor’s economic development office stating,”After more than three years, Minister Christopher Muhammad has still failed to generate a single shred of reputable scientific evidence that the construction on phase one of Hunters Point shipyard was harmful to the surrounding community.”

Continued Cohen, “The fact that Barack Obama’s EPA has joined the long list of federal, state and local agencies that agree there is no reason to stop this project is important because of the Obama administration’s strong commitment to environmental justice.”

Cote neglected to mention that, on January 5, 2010, Jared Blumenthal, EPA Head under the Obama Administration had not yet taken office. Bush Administration officials still controlled the agency and the pre-Obama structure stood intact.

Additionally, the EPA betrayed its concern for safety problems in Bayview Superfund site reconstruction by the funding and sponsorship of Wilma Subra’s condemning expose.

So desperate is Redevelopment/ Lennar to see this project go through that Lennar recently sent a undercover operative into a Nation of Islam meeting with a loaded unregistered gun and a tape recorder, ostensibly to spy. When Nation of Islam security discovered the man and called police, a Sunday, February 28 Matier and Ross column, slanted and twisted the resulting debacle.

They casually flipped Victim into Perpetrator quoting district attorney spokesman Brian Buckelew. “We could charge them [The Nation] with misdemeanor false imprisonment, but the fact that he was carrying a gun would make it a difficult case to take to a jury.

“Nation of Islam representatives could not be reached for comment,” [because they’ve been skewered so many times by the Press.]

Brent Begin’s ‘Examiner’ report on the meeting quotes Lennar spokesman Glenn Bunting confessing, “Executives did not feel comfortable sending a regular employee to the meeting, so they called upon their security firm, which sent the ex-cop.” Were they suggesting scary black people?

This reporter attended a peaceful, informative meeting and was treated with the utmost kindness by the Nation’s ultra-polite members, including soft-spoken Leon Muhammad who greeted me at the door. When I left, I noticed a group of four figures quietly conversing down the block. Some cop cars were parked next to a couple of people and police. Two weeks later, I learned these were the arresting officers and the Lennar plant.

Yet, the Examiner’s Ken Garcia, who was not present, quoted Lennar’s operative in his recent hit-piece complaining, “At one point, there were nearly a dozen people surrounding me, and one of the guys kept saying, ‘Let’s cap [shoot] this motherf—er,” said the guard, who asked that his name not be used for fear of retaliation. “At one point, they all started moving in on me and I thought I was going to die. It was going bad really quick.”

Leon Muhammad told the Police Commission, “The man came in there with a loaded gun, a fictitious name… and then when we had called police officers, what we saw was that you all were chuckling, laughing, and giggling with this man. So, we want to know if there’s nepotism and cronyism that’s ruining Bayview in the Police Department.”

‘Wrote Garcia, “It was only after he was handcuffed that he informed the group that he had a concealed weapon, [Marie reported several people saw the gun during the meeting] for which he is fully licensed to carry.”

At Police Commission meeting’s end, Captain Suhr was asked, “Where is the man now?” He answered only, “It’s a misdemeanor, so, even if he was in custody, he would be…” Someone cut him off, “Misdemeanor with a gun in a church and a school!?” Answered Suhr, “Possession of a firearm without a felony conviction by anybody is a misdemeanor.” Others questioned why, when a misdemeanor is an arrestable offense, the man was not arrested, and, further, why possessing a loaded, concealed weapon is a mere misdemeanor, not a felony carrying a heavier penalty.

Marie speculated that they “cited him out with a promise to return to Court if he is charged.” Suhr stated that they immediately passed their report along to the District Attorney’s office to determine whether to file charges against the man. Is the Matier and Ross headline correct, “Black Muslims’ scuffle with ex-cop apt to fade?”

Word is, the D.A. is “looking into it.” After the hoopla dies down, will this case conveniently disappear into the District Attorney’s Great Dark Hole of Forgotten Atrocities?

It is not known whether the man was fined, but he did not receive the misdemeanor penalty of jail time under one year. As Leon Muhammad observed, “to this day there’s a man walking around — we don’t really know his real name — with a permit that’s expired, with a license to kill.”

As this situation is discussed in various forums, more questions are raised and none are answered.