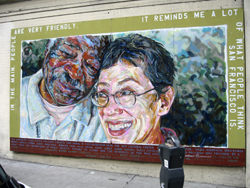 Among the most familiar images in the Tenderloin is Brent Cook’s mural of Kathy and Leroy Looper that has long been displayed on the Page Hotel at Leavenworth & Turk Streets. But this iconic mural was thrown into a dumpster two weeks ago, reportedly at the request of the hotel’s owner. The Looper family and the mural’s owner, the 509 Cultural Center, worked with DPW to recover the mural, but it was not found. San Francisco law prohibits such destruction of public art, and a lawsuit against the hotel owner is expected.