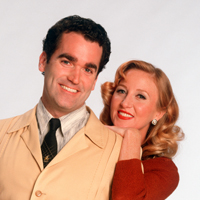 IT WILL BE A WHITE CHRISTMAS IN SAN FRANCISCO

Of course we all remember Bing Crosby singing Irving Berlin’s White Christmas in the popular black and white movie. He recorded the song and performed it various times in concerts and on TV specials. The song really became identified with him. Other notables that have recorded the fuzzy warm little song are Louis Armstrong, Frank Sinatra, The Back Street Boys, Alvin and the Chipmunks, the German heavy metal band “Halloween”. Others you may remember were the Beach Boys, the Supremes, the Temptations, the Four Tops, Barbra Streisand, Peggy Lee, Kenny G, The Three Tenors; Perry Como, Garth Brooks, Doris Day, Kiss and Brian d, Arcy James. These are among the more than 500 performers who have recorded the song. That’s not the end. Every year more will join the list as they record holiday albums. How can you lose with White Christmas?

D’Arcy James is one of the newest on the list. Even though he is one of the leads in the new holiday stage musical called “White Christmas”, he recorded the song on his new C.D. long before the show was born or that he even knew that he would be singing the treasured song. Here are a few talking points about the talented veteran actor.

Where did you grow up?

Really, I said – I think I went there for a little vacation.

Whatever for? I couldn’t wait to get out of there. No one goes there for a vacation. You’re probable thinking of the Lakeside resort Saugatuck, Michigan. Everyone gets those names mixed up.

I guess your right. I should brush up on my Indian History. As a matter of fact – I probably spelled both of the wrong. But, I’m not going to look them up now. Let someone write in and tell me that I don’t know how to spell. It’s more fun that way.

You are 36-years old. Are you married?

Yes I am to actress Jennifer Prescott. And we have a little three-year-old baby. They are both great.

Do you get much sleep?

Actually yes, so far. The baby is pretty good. She’s no trouble at all. I don’t know how it’s going to be when we move to San Francisco for the show. We will be here for 10-weeks – we hope the move will not bother her.

Ok, since the baby apparently isn’t your Alarm Clock – what time do you get up in the morning?

Rehearsal is at 8 am – so I have to get up pretty early.

Gee – thanks really interesting. I wouldn’t think that it would be very much fun to sing at 8am in the morning. Somehow the mood that time of day would seem to be a tough thing to really get used to.

It’s ok. You get used to it. Once you get on the stage – it sets you up to perform. Stages do that.

How did White Christmas come about for you? Did you just fall into a snow bank one day in New York and think – gee, I’d like to do the musical White Christmas.

Ha, Ha, Ha – or Ho, Ho, Ho. Actually I wan contacted the producers who were familiar with my work in other shows.

I only remember about three songs from the original movie. Did they beef up the show with more songs?

Yes, they added New Berlin songs that were not heard in the movie. They fit really well into the plot – just as if they were written for this stage musical. There are a lot of musical things that have been done to the show to make it full, spectacular stage musical. It’s a big old roadway show. Most holiday shows are two-dimensional. This show goes beyond that.

That is funny. I can assure that I don’t have big teeth. And nowhere near as many teeth as Brad Pitt and Julia Roberts.

Do you have a fan club yet – or a web page where fans can keep up with what you’re doing and what happens next?

Yes, I do. They can go to briandjames.com.

Brian.this is the Premiere of White Christmas. Are their plans to tour with the show – or a Broadway run?

To tell the truth – I really don’t know yet. I think the plans right now might be for it to be a recurring Holiday show.

I would ask you to sing a few bars of White Christmas to me – the problem is it would be difficult to transfer the experience to paper. I’ll just wait for the show. But if anyone’s in a hurry — they can buy your Holiday C.D. that is now available to get into the holiday spirit. Have a Merry Little Christmas! Opens Nov. 3 at the wonderful, civilized Curran Theater.

It’s back! That would be the annual star-packed Concert “Help Is On The Way for the Holidays V1. And what an array of talent they have this year. Sexy Lorenzo Lamas will be their, SuperStar singer Latoya London who came this close to being the American Idol. Many think that she was the best singer. And, hearing is believing.

Other stars of stage and screen will include ate Caplin & Gary Franco, International Ballroom dance stars. Always fun is Connie Champagne – Cabaret who is just marvelous. With a name like Connie Champagne – people assume that she is a drag queen. Nope, she’s the real deal and a real charmer.

You will also hear Star Search finalist Spencer Day, Loretta Devine (Broadway’s Dreamgirls) you also saw her in the film “Waiting to Exhale.)
Stars Michael Tucker and Jill Eikenberry have been supportive for years and they always come up with some very funny routines. The singer with hair on his chest – Tim Hockenberry – Jazz/blues recording artist who will mesmerize you with his powerful voice. And – if you never seen them before – you are going to love the Kinsey Sicks – “The Drag-a-pella beauty shop quartet. Not to be outdone in the outrageous department – Rip Torn will throw stuff at you (confetti). Taylor is an international star who has played Las Vegas and many Las Vegas wanna be’s.

The Richmond/Ermet AIDS Foundation was founded by Barbara Richmond and Peggy Ermet in memory of their sons John Richmond & Doug Ermet. There are different levels of tix prices. Some include an after party in the Green Room at the War Memorial Herbst Theater. Call the REAF ticket line at 415-273-1620 for info. This is an extravaganza that you won’t want to miss.

Buzz Along. Send Love Letters/Hate mail or humorous tips to Lee at buzztatler@aol.com