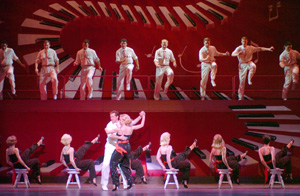 I’M DREAMING OF A WHITE CHRISTMAS! It is a lovely thought isn’t it? There is an old adage.”The Magic begins at the door.” To help us dream about that White Christmas couldn’t the Curran Theater put a couple of wreaths on the glass doors of the lobby entrance? And some Xmas decorations around the box off ice would also be nice. While were at it – why not have the ticket takers wear Santa Hats. To add to the magic – one of the ushers could be dressed as Santa.

Sure, there is plenty of magic on the stage with the finely crafted “White Christmas” based on the movie that starred Bing Crosby. It’s a warm and fuzzy story about boys who come back from the war and discover that their old Army General is in some financial trouble. The Boys are all in the entertainment biz – and concoct a scheme to put on a show in Vermont for the Old Guy to raise money for his Vermont Inn.

You’ve never seen such an elaborate show in a barn in your life. Costumes that cost a fortune, with choreography that looks a lot like Fosse. Then again, Fosse didn’t really invent those dance routines – he borrowed them from Agnes DeMille. Nevertheless the cast dazzles you in their top hats, short tailored jackets and that “Chicago” strut.

This Christmas story is sexed up more than the movie. Short, Short shorts barely cover up the long legs of the dancers. Santa would certainly take note of this – and maybe give them a really good gift. Of course, there is the Irving Berlin music that guides us through the romance – the misunderstanding of the romance and the roadblocks to putting on a show in the barn in one week. There are wonderful presentations of “Let Me Sing And I’m Happy”, “Count your Blessings”, “I Love A Piano”, and “I’ve Got My Love to Keep Me Warm” sung as snow begins to fall on the stage. And here’s some real magic..the snow also falls on the audience in the first few rows of the theater. The hit song.”White Christmas” – brings alive the hopes and dreams of the Christmas Season.

Seen in the opening night audience was the director Walter Bobbie, Pat Craig of the Contra Costa Times, Actor Dean Goodman who had a real big role in the Movie “Tucker”, T.V. guy Don Sanchez and the English Guy for Channel four.

The perfect cast that really brings the show off without a hitch or a broken snowflake are Brian d’Arcy James who steps into Bing Crosby’s shoes, Jeffrey Denman plays his army and showbiz bud – who is a charismatic guy about town that the ladies flock to. Anastasia Barzee and Meredith Patterson are Betty and Judy Haynes – sisters that have a rousing song and dance act. Local Actor Charles Dean of the Bay Area is the gruff General with a heart of gold. The comic relief with a voice that rolled the audiences socks up and down is Susan Mansur who plays the General’s “right-hand”. She is a funny, engaging performer. Jonathan Hadley stars as T.V producer Sheldrake. This is a wonderful ensemble cast. You will love every minute of it. Oh, the Magic of it all – even though it doesn’t start at the door. RATING: THREE GLASSES OF CHAMPAGNE.

HORRORS! — IT’S ‘LITTLE SHOP OF HORRORS’ AT THE GOLDEN GATE THEATER. It started out years ago as a sweet little musical that had an underlying theme of innocence. Now in this new version – it has taken on a darker side. Everyone this time around gets eaten by the man eating plant “Audrey II”. The story is about a young geeky kid who works in a florist shop. He comes into possession of a strange looking plant that he nurtures to health. A ditzy blonde who is in an S & M relationship with a dentist also works at the florist. The plant grows and attracts media attention and the young clumsy geek becomes a celeb – but there is a dark secret of why the plant is getting so big. Seymour feeds it blood – mostly his.

This new revival pumps of the 50’s doo-wop sound and they have added touches of “Fiddler on the Roof” to give the musical a Jewish Spin. The stars are: Anthony Rapp who plays Seymour the kid. He is really convincing and conveys his dilemma to a tea. Tara Kelly – as the ditzy blonde who dreams of a little house in the country with a white picket fence that looks like all the other houses on the street – is hilarious. She sings lyrics like – “we’ll put plastic on the furniture to keep it clean.’ James Moye is all over the place; he is the S & M dentist among other characters. He even appears in drag in one scene. To say he has a lot of range in acting would not be saying enough. He was great fun. The backup singers that are so essential to this show are LaTonya Holmes, Amina Robinson and Yasmeen Sulieman. The scene dazzled me where they rise above the stage in gorgeous white gowns like the Supremes.

This show is very technical – and it all worked well – the plant amazingly gets bigger and bigger right before your eyes. In fact near the end it gets so big that it’s head reaches out into the audience. If you have never seen Little Shop – you should see it. The opening may remind you of the Rocky Horror Show – which is what they may have in mind. You don’t see him until the end – but Michael James Leslie the voice of the plant gets your attention. RATING: THREE GLASSES OF CHAMPAGNE.

BUZZIN GETS THE BUZZ: HOT NEWS: “Wicked” – the hot Broadway hit that got it’s start in San Francisco will return next August for a six week run. Keep this in mind and order tix as soon as they are released, because they will be hard to get. We also hear that the high school musical “Grease” will be coming in January. Rumor is that one of the stars will be Frankie Avalon. .The Broadway revival of Oklahoma will be at the Orpheum Feb. 1st til the 13th. Why two weeks only? Who knows? – they didn’t ask me. If you are a John Lennon fan – look for the new musical “Lennon” to arrive in San Francisco soon.and in March 05, “Evita” will dazzle us again until April 10. This Saturday – Barbara Cook – the Broadway Diva who has a new CD with Broadway songs will be at Medium Rare records on Market St. from 2pm – to 4. She sings this Sunday at Davis Hall 7pm for one night only.

IT’S PHONE BUZZ TIME! GET THOSE HUMOROUS TIPS IN TO LEE/
buzztatler@aol.com

‘Sadistic Dentist Works over a Patient in Little Shop of Horrors’