Leave God Out of the Governor’s Race! 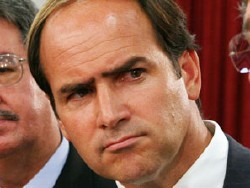 Separation of Church and State? Republican Zach Wamp (a right-wing Congressman from Tennessee) has obviously never heard of the concept. Or if he has, it’s not something he takes seriously. Perhaps he wasn’t even in school the day they talked about it in civics class.

Wamp, who is running for governor of his state, has just released an ad in which he states his religious views – which are, of course, conservative and Christian. With a strange white backdrop behind him (is it supposed to suggest a church or some heavenly locale?), Wamp tells viewers that he believes “God is the center of the universe who made us to serve him and to serve others.”

“We must restore America to its Judeo-Christian heritage and its Constitution,” he proclaims.

Judeo-Christian heritage? Maybe he missed civics class altogether. As for the Constitution, he’s obviously talking about a different document than the one that civil rights groups throughout this country believe in. Judging from his report cards, Wamp has never even bothered to look up what civil rights means.

Wamp has been rated 0% by the Human Rights Campaign for his record on gay rights and marriage, 25% by the NAACP (National Association for the Advancement of Colored People) for his views on affirmative action and other issues, and 7% by the ACLU (American Civil Liberties Union) for, among other things, his support for making the Patriot Act a permanent part of the shameful legacy of the Bush administration.

Even the conservative Wall Street Journal doesn’t like this guy. But, hey, the Tea Party crowd must love him to death.

Wamp’s ideas are laughable. He believes that those receiving unemployment benefits have no drive to find work and are basically being lazy. He told a group of small business execs recently, “We want people out there scraping and clawing and looking for work and not just sitting back waiting.”

He has said of the president’s healthcare plan, “ObamaCare is making secession an attractive option.” Perhaps Wamp should secede from politics. That would do us all a big favor.

The bottom line is that sensible Americans should be concerned that Wamp has crossed a big line by making his personal religious beliefs a focal point of his bid for a public office. Religion has no place in a governor’s race in Tennessee or anywhere else in the U.S. Wamp should keep his belief in the guy in the sky to himself and concentrate on the issues facing his state and this nation.

Religion is often the last refuge of those who have something to hide or nothing else to offer.