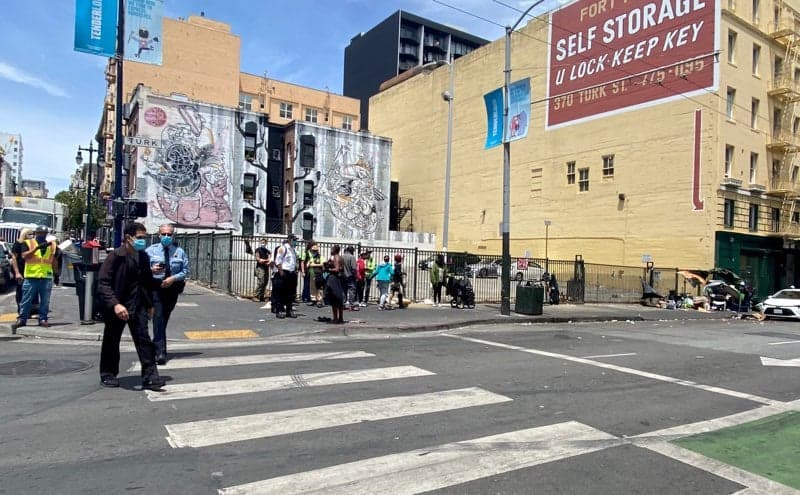 Tenderloin residents, workers and small business owners are thrilled at last Friday’s lawsuit resolution with San Francisco. The settlement provides the Tenderloin with the same level of health and disabled access protections as other neighborhoods. It ends the legal double standard that put the lives of over 20,000 Tenderloin residents and workers at risk.

70% of tents must be removed by July 20 with the balance soon thereafter. The preliminary injunction requires reasonable efforts to remove all of the tents; attorneys for the plaintiffs can quickly get court action if the city fails to move forward. But if yesterday’s major effort at Turk and Hyde streets (see accompanying photo) is any indication, such legal action will not be needed.

Tent-clogged sidewalks have trapped residents in their homes for months. No other San Francisco neighborhood has undergone such containment. Only in the Tenderloin did residents risk contracting COVID19 just by stepping outside their homes.

After months where the city flagrantly violated COVID19 mandates necessary to protect the Tenderloin’s families, 3000 children, disabled persons and SRO residents, a new day is coming. The Tenderloin is finally getting the support it deserves.

Of course, it wouldn’t be San Francisco politics if some did not complain about the settlement. A group of homeless advocates filed a Motion to Intervene in the lawsuit, though it will not impact the settlement.

The motion challenges the implementation of moving tent dwellers to hotel rooms or supervised tent encampments. According to the legal papers, the advocates “believe there is a real risk that this lawsuit will result in the City moving large numbers of people from place to place, exacerbating the trauma of homelessness that compromises the physical and mental health of people experiencing homelessness.”

Yet advocates made no such objections when the Board of Supervisors required the city to place over 8000 unhoused residents in tourist hotels. The same city agencies are moving people into hotels under  the legal settlement as would happen under the Board’s measure.

It appears some advocates cannot accept that Mayor Breed is now working hard to protect the unhoused.

The legal motion does help answer one key question: what led to the striking increase in Tenderloin tents?

The court papers describe the role of a small nonprofit group in the Tenderloin:  “Faithful Fools spent approximately $2,000 on tents for persons trying to shelter in place on the streets. We have provided tents and sleeping bags to people released from jail and people discharged from the hospital directly to the streets with very little other than their clothes.”

I understand Faithful Fools was motivated by humanitarian concerns. But adding more tents to Tenderloin sidewalks without ensuring social distancing put thousands of residents and workers at risk.

The plaintiffs included a Cadillac Hotel resident whose inability to get his wheelchair through sidewalks was a blatant violation of the Americans for Disability Act (the ADA).  I was surprised to see Disability Rights California join the Motion to Intervene even though the lawsuit addressed the city’s ADA violation. Absent the lawsuit this civil rights violation would be continuing.

I’ve also heard claims that the settlement lacks ADA-compliant hotel rooms. Federal and state law requires such accessible housing. Once again, advocates never raised this issue when urging the Mayor to shift tent dwellers to hotels under the supervisors’ legislation.

Ending the “Right to Camp”

According to the 9th Circuit Court of Appeal, “as long as there is no option of sleeping indoors, the government cannot criminalize indigent, homeless people for sleeping outdoors, on public property, on the false premise they had a choice in the matter.” That’s why the lawsuit settlement requires San Francisco to either move tent dwellers to hotel rooms or to supervised encampments.

That’s where I and other lawsuit supporters strongly disagree.

When the Board of Supervisors passed legislation about housing the unhoused in hotel rooms I don’t recall any Supervisors saying people still have the right to camp on public sidewalks. The reason is clear: the right to camp on Tenderloin sidewalks puts thousands of formerly homeless living in the Tenderloin along with thousands more at risk. Sidewalks are not suitable housing in any neighborhood when shelter is available.

The settlement does not address drug dealing. Drug dealing was declining before the pandemic and is already not as widespread as it was even two weeks ago.

Phil Matier’s Sunday SF Chronicle story concludes that there is “no end in sight” to the Tenderloin’s drug dealing arrests. He quotes Public Defender Mano Raju: “Decades of undercover police operations in the Tenderloin have failed to make any meaningful impact on demand, and buy-bust operations — which overwhelmingly target and jail people of color — usually recover very small amounts of narcotics. To address the public health crisis of addiction, which feeds the demand, we must beef up our medical response, not continue to invest in law enforcement responses that simply do not work.”

Like his former colleague and current District Attorney Chesa Boudin, Raju cares more about drug dealers’ safety and life hopes than he does about the safety of children and residents of the Tenderloin. Raju has no problem with allowing sidewalk drug dealing as a Tenderloin way of life; he has never expressed any concern about the impact of such activities on those growing up in the neighborhood.

In fall 2009 then-Police Chief George Gascon launched a massive undercover operation in the Tenderloin. It successfully cleared the neighborhood of drug dealers—but the Public Defender (then Jeff Adachi) and Sheriff complained about the volume of arrests. They demanded Gascon  allow the neighborhood dealers to return; unfortunately, he agreed.

Raju knows that the Tenderloin has long been used by the city as a drug dealer containment zone. That means drug dealing is mostly allowed, with infrequent arrests to keep up appearances.

I disagree with Matier. I see a clear end in sight to the Tenderloin’s drug dealing. Police enforcement has increased and there is much happening in the neighborhood that suggests a major breakthrough.

Thanks to Hastings Law School, the fellow plaintiffs and Mayor Breed’s support for a revitalized neighborhood the Tenderloin faces a brighter future.It won’t happen overnight, but the lawsuit has revived hopes for transforming the Tenderloin into a safe and healthy neighborhood.

It is long overdue.