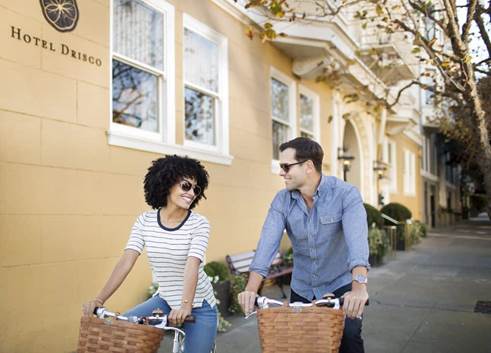 City housing inspectors at the Department of Building Inspection have uncovered flagrant law breaking at Pacific Heights’ ritzy El Drisco Hotel, 2901 Pacific Avenue. A June 2018 inspection found that “based on a review of the required records of use and inspection observations this hotel has a practice of renting out guest rooms that have been designated as residential for tourist use. In particular, use records show that all 16 residential guest rooms are continually rented out for periods as short as one.”

In true Pacific Heights style, Pacific Union, the real estate company that effectively owns and operates the hotel, went all out in violating the city’s Residential Hotel Anti-Conversion Ordinance. They didn’t simply illegally rent residential rooms to tourists once or twice, they did it as a business practice.

According to the inspector’s report, “records failed to show a single instance in which residential guest rooms were rented in accordance with Chapter 41 of the San Francisco Administrative Code.”

Think what that means. The El Drisco did not rent a single room to the permanent tenants that the law mandates use of such spaces.

I’m not aware of any other SRO that has persisted with such blatant law breaking. And to my knowledge the illegal rentals are continuing to this day.

I look forward to hearing the thoughts of Supervisor Stefani and her D2 challengers about this situation. It would be great for the representative of Pacific Heights to demand the hotel’s compliance with city law.

Think of all the money Pacific Union made from flagrantly violating a law that has been in effect for nearly forty years. And one has no idea how long they have gotten away with such ill-gotten gains, since their crimes were only uncovered due to the increased enforcement that a fully staffed DBI housing division has been able to overtake.

I suspect the hotel has violated the law for years. All that time unfairly competing with legal tourist hotels, a type of unfair competition strong enforcement is designed to prevent.

The best way to make crime not pay in this case is for City Attorney Dennis Herrera to file suit against the El Driscol or reach a settlement that repays the illegal rentals to the city. Herrera’s office has a long history of enforcing the hotel conversion law and no city attorney in the nation has a better record of recovery ill-gotten gains from landlords.

That’s why it is so important that DBI referred the case to the City Attorney’s office for litigation on July 17.  Kudos to the Building Inspection Commission for doing so.

Kudos to our Inspector Luton and the city’s crack HCO enforcement team for finally uncovering this illegal conversion. And credit is also due to Supervisor Aaron Peskin for sponsoring in 2017 the HCO reforms that facilitated DBI’s increased enforcement.

We will keep readers posted on future developments in this case.

Randy Shaw is Editor of Beyond Chron.  He heads the Tenderloin Housing Clinic, which has worked to enforce the city’s anti-conversion law since 1980.