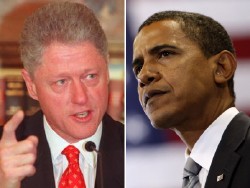 With polls showing Republican gains in November dependent on a depressed Democratic turnout, activists are focusing on mobilizing the Democratic base. Among the most dispirited Democratic constituencies has been Latinos, but the latest weekly tracking poll from Latino Decisions shows Latinos’ positive perceptions of Democrats sharply rising in the wake of the Party’s unsuccessful effort to enact the DREAM act last week. The percentage of Latino voters who felt Democrats were ignoring or blocking immigration reform fell from 61% to 53.8%, and those who felt Democrats were actively working on immigration reform increased from 25% to 30%. This shift reflects a broader “return to the base” Democratic trend caused by a combination of Tea Party successes and President Obama’s increasingly partisan rhetoric to galvanize the Party’s core constituencies. The question is whether this trend has emerged too late.

The September 27 Latino Decisions poll has some very positive news for Democrats.

In California, Latino support for Jerry Brown (54%-28%) explains his five-point lead in the most recent Los Angeles Times/USC poll. In contrast, last week’s Field Poll found only a 3% Brown lead among Latinos, a clear sampling error that explained why Field has the race tied.

While the party preferences of Latino voters has not changed since every single Republican Senator voted last week to prevent a vote on the DREAM Act, the more positive perceptions of Democrats will help Latino voter turnout. When a voter outreach worker is asked “what have the Democrats done on immigrant rights since 2009,” they can now respond that the Party tried to pass the DREAM Act but lost on a party line vote.

(Maine’s Susan Collins or Olympia Snowe could have denied Democrats this argument without changing the outcome of the vote, had either bucked their Party on the DREAM Act. But both fear that a future Tea Party challenger would use it against them.)

To be clear, the poll found that a majority of Latino voters still believe Democrats are ignoring or blocking reform, and that less than a third believe that Democrats are actively trying to pass immigration reform; this shows there is much work to be done. And as Latino Decisions pollsters Matt Barreto and Gary Segura note, “the question remains if Reid’s push for the DREAM Act was too little too late.”

Yet the trend is moving in the right direction.

The Democratic base is also cheered by President Obama’s new willingness to wage partisan attacks on Republicans, a strategy progressives have been promoting since he took office. The President hosts a large campaign rally in Madison, Wisconsin today, and has others planned through Election Day to revive the spirit of ’08.

Is this, like Reid’s push for the DREAM Act, also too little, too late?

I don’t think so.

Unlike activists, many voters are just starting to pay close attention to the November elections. I’ve gotten reports from local and state campaigns in California that most of those reached on phone banks are not even sure what or who is on the ballot.

That’s why polls are showing high undecideds; it’s not that voters are torn between choices, rather it’s that they are just starting to focus on the election.

In October 1994, a month before Republicans won the House and swept every national race, progressives did not have websites,email lists, and grassroots organizing groups like Move On, Democracy for America (DFA) and Organizing for America helping to galvanize Democratic turnout. The right-wing did not have FOX News, but conservative activists were as energized behind Newt Gingrich’s Contract With America as the Tea Partiers are today.

Democrats were far more demoralized in 1994 than today. The Democratic base was not enthused about Bill Clinton (he was backed as the Democrat who could win), and the failure of health care reform and the President’s abandonment of his “putting people first” agenda left progressives unmotivated for the 1994 mid-term elections.

Consider: many progressives are motivated to keep Nancy Pelosi Speaker of the House, but few cared in 1994 about saving Speaker Thomas Foley (who lost his own re-election).

Also consider: it was so bad for Democrats in 1994 that Republican George Pataki won the New York Governor’s race, and Republican Governor Pete Wilson was easily re-elected in California; in 2010, New York Democrat Andrew Cuomo is a lock to be the state’s next Governor, and California’s Jerry Brown is ahead and will likely increase his margin as Election Day nears.

Finally, the GOP did not face the burden of high expectations in 1994, with their taking the House the era’s biggest political surprise. Today, the media narrative assumes Pelosi will soon be gone and Reid left hanging by a thread; if Democrats keep the House, Republicans will be on the defensive on November 2 regardless of how many House and Senate seats they win.