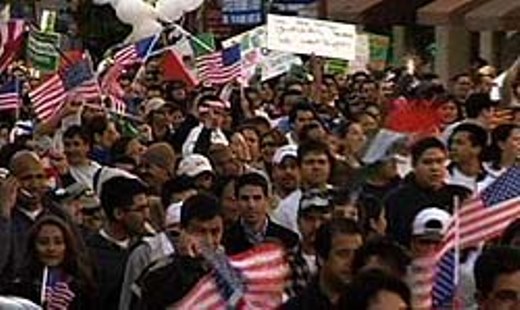 An August 27, 2016 NY Times article on Latino voting (“As Trump Repels Minority Voters; GOP Fears its Future in the West,”), echoes a common but wrong explanation for Latino voting patterns: namely, that high turnout is triggered by anti-immigrant messaging, not labor union voter turnout efforts. Noting that predictions proved incorrect that “Arizona would turn blue” in the wake of anti-immigrant legislation passed before the 2010 election, the article fails to recognize that the lack of major labor union presence and outreach in Arizona results in lower Latino voting.

It seems that most of the media associates California’s rising Latino vote with Prop 187 in 1994 rather than with increased Latino union membership and labor=led voter outreach. As I document in my book, Beyond The Fields: Cesar Chavez, the UFW and the Struggle for Justice in the 21st Century,  California has produced rising Latino voting due to one overwhelming factor: Labor voter outreach to Latinos.

Former UFW organizer Miguel Contreras became Political Director of the LA County Federation of Labor in 1994. The rest, as they say, is history. Contreras first brought UFW Latino voter outreach strategies to Los Angeles, and his success there led labor to expand his methods statewide.

The lack of a powerful labor movement in Arizona, Florida and Texas still hampers Latino voter turnout. So does the relative lack of much Latino labor union membership in these states.

While efforts by Democratic Party campaigns to boost Latino voter turnout can drive up Latino turnout, the type of gains seen in California require the  close connection to Latino voters that labor unions provide. Donald Trump’s candidacy may obscure the need for unions to drive Latino turnout, but turning Texas blue through dramatically increased Latino voting may require a stronger labor presence in the state.