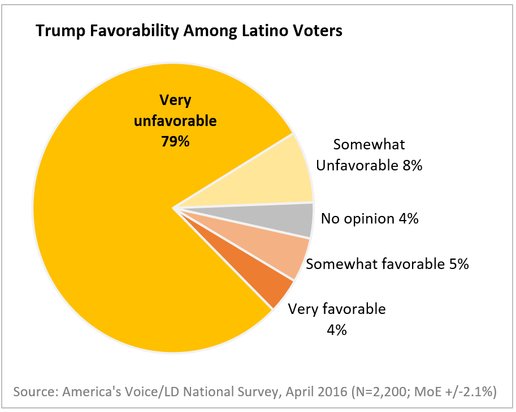 Spanish philosopher George Santayana’s adage, “those who cannot remember the past are condemned to repeat it,” aptly applies to Donald Trump’s presidential campaign. Trump burst into the race on June 16, 2015 and immediately issued an indictment against unauthorized immigrants; “When Mexico sends its people, they’re not sending their best…They’re sending people that have lots of problems, and they’re bringing those problems with us. They’re brining drugs. They’re bringing crime. They’re rapists. And some, I assume, are good people.”

Over the course of his campaign, Trump’s rhetoric against “illegal immigration” has helped to boost him to the front-runner position among the Republican candidates. Political pundits and party elites have offered speculations on the effects of his campaign on Latino voters and the prospects for a Republican victory this November. The speculation can now be cast aside as the reality of Trump’s effect is now documented by the results of our first national tracking poll on the Latino electorate. Latino Decisions in partnership with America’s Voice recently released the results of a nation-wide survey of 2,200 registered Latino voters. [See more details: toplines here, crosstabs here, slide deck here.]

Respondents were asked to rate Hilary Clinton, Bernie Sanders, Donald Trump, Ted Cruz, and John Kasich on a four point favorability scale ranging from very favorable to very unfavorable. Among the five candidates, Donald Trump had the worst favorability rating, with a 79% “very unfavorable” rating. In contrast Cruz and Kasich had “very unfavorable” ratings of 34% and 18% respectively. That is a dramatic 45-point gap between Trump and Cruz, and 61 points between Trump and Kasich.

The animus Latinos feel toward Donald Trump is evident in our poll, despite his claim that “The Latinos love Trump, and I love them.” Clearly majorities of Latinos oppose Donald Trump. The question is, will Latinos turnout in record numbers against Trump? Has Trump’s campaign damaged the Republican Party name among Latino voters?

Together with other Latino Decisions scholars, I have provided extensive documentation on how anti-immigrant policies and rhetoric in California in the mid-1990s caused Latinos to turnout in record numbers and transformed the Golden State solidly blue. We have written extensively about how the anti-immigrant strategy is shortsighted given the growing diversity of the American electorate. Despite these warnings, the Trump campaign has managed to put the GOP on course to repeat the mistakes of the past.