Latino Mothers Say No to Another TL Drop-In Center 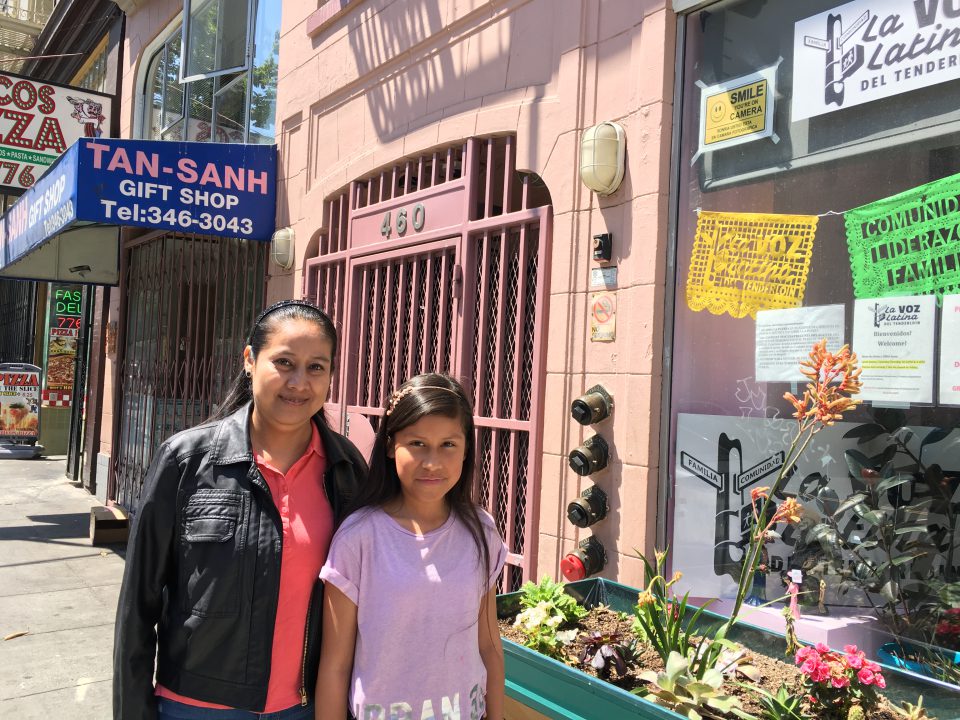 Juana Campos with her daughter

(Ed Note: This is the second in a series where Tenderloin residents and workers who oppose the lack of geographic equity in the city’s allocation of homeless services)

As the debate rages on over a 24-hour homeless drop-in center coming to the Tenderloin, some members of the neighborhood’s tight-knit Latino community are saying enough is enough.

Juana Campos is among them. She spoke with Beyond Chron through an interpreter inside the offices of the Tenderloin community organization, La Voz Latina. La Voz works with Latino families in the neighborhood. Campos spoke as her 11-year-old daughter looked on.

For Campos, the neighborhood is bad enough. She thinks a homeless drop-in center built across the street from a methadone clinic, all alongside Hyde Street’s epic drug scene is a disaster waiting to happen.

She says she can hardly leave her apartment because people are constantly using her stoop to buy and sell drugs.

“I’m scared for my security,” she said. “They’re aggressive and get close to punching me sometimes.”

Campos, who emigrated from El Salvador in 2004 to “pursue the American dream,” lives around the corner from the proposed site on Hyde Street in an apartment her family has called home for seven years.

But her dream is becoming a daily nightmare as the street outside her home continues its march towards anarchy. A sea of used drug needles, fighting in the streets and aggressive drug dealing tactics are all part of what she experiences while walking around her neighborhood. Although she says drugs in the Tenderloin are nothing new, they are much more in your face now. Dealers are aggressive with their sales pitches while users get high wherever they want.

When asked about what sorts of services she would support in the neighborhood, Campos responded that a 24-hour drop-in clinic might be a good idea – just not for the Tenderloin.

“The neighborhood is already so saturated with homeless people and homeless services,” she said.

Campos is not alone in her negative feelings towards more homeless services coming to the neighborhood.

Ana Gee also lives near the intersection of Hyde and Turk streets. She does outreach the Tenderloin’s Code Enforcement Outreach Program (CEOP), meaning she lives and works near where the proposed drop-in center would be.

She’s also a mother to her 3-year old daughter Emma, who she fears must grow up embedded in the neighborhood’s unobstructed drug culture.

“I don’t mind explaining to her what being homeless means,” Gee said. “That’s easier than explaining why drug dealers do what they do and why they have weapons and cause commotion every time we walk by.”

Gee immigrated to San Francisco from El Salvador in 1999 and says drug dealing in her neighborhood has worsened in recent years. She says a new 24-hour drop-in clinic will mean big business for local dealers who will seize upon the opportunity to find more clientele.

“It will be a new market target for drug dealers,” she said.

A new market for an already emboldened group of dealers? Gee says no way.

“The drug dealers are really aggressive nowadays, especially to me once they see I’m a woman,” she said. “They harass me, say I’m pretty, then ask for me to buy drugs.”

When asked about how people around her feel about the center, Gee explained that most people are she’s spoken with have been unfamiliar with both the proposed center at 440 Turk St. and the concept of what a “24-hour drop in center” entails. She says there’s a lot of misinformation over what these centers are and what their function is.

“It’s very unfair to the homeless population to bring them to an already problematic area, which is Hyde and Turk,” Gee said. “They will be exposed to lots of violence, drug dealers, and to people who already live here on the streets that they will have to compete for space with.”

The 440 Turk proposal will be considered by the Board on September 15.

Garrett Bergthold is a staff writer for Beyond Chron

The motion supported the original plan for DHSH to move their administrative offices to the site, and opposed the attempt to modify the plan by converting the space to services.

The plan opposed by the TLCBD would have top DHSH brass moving to space in SOMA at a cost of $4.25 per square foot per month rather than occupying 440 Turk, the building the agency bought to house its top staff.