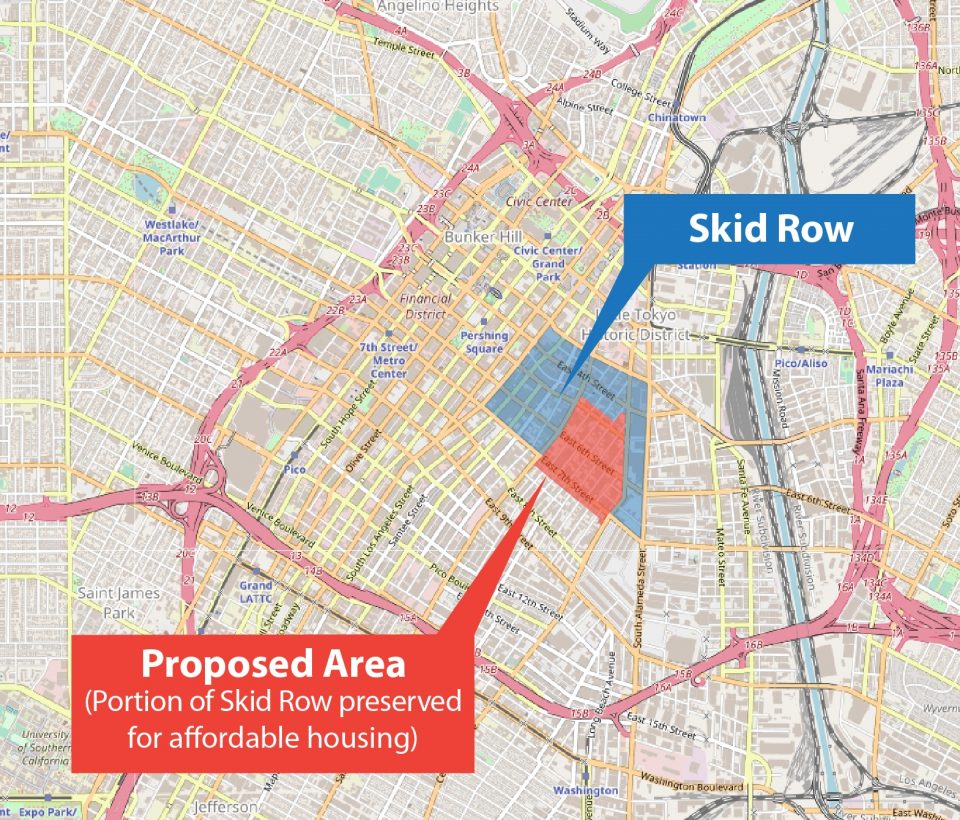 Skid Row. The name evokes images of Raymond Chandler stories and film noir. People living on Skid Row were typically “on the skids.” Skid Row districts were once common throughout urban America but gentrification, demolition and displacement have left few remaining.

Los Angeles’ Skid Row is the largest to survive.  And whether it does will say a lot about whether urban America has learned from its past mistakes, or will repeat them.

LA’s Planning Department has worked for more than two years on a plan to rezone Skid Row. An early version of the proposal would have opened the neighborhood’s main corridors to primarily market-rate and luxury housing, potentially displacing thousands of existing residents. When city planners initially floated this idea in 2017, community leaders responded with press conferences, petitions, and policy reports offering a more equitable plan. Skid Row advocates put forth a financially feasible, pro-development plan that protects tenants from displacement and increases affordable housing through the entire Skid Row district.

Now the Planning Department has issued a new proposal. It would protect 36% of Skid Row for affordable housing.

That sounds like good news until you realize that it defines the boundaries of “Skid Row” by carving out nearly two-thirds of the very low-income neighborhood (see photo above). In other words, the 36% is based on an area that does not cover much of Skid Row. City planners also omitted community recommendations for mandatory inclusionary zoning, which requires developers to dedicate a percentage of their units for below-market units.

Unlike San Francisco and other cities, Los Angeles does not have a citywide inclusionary housing law. But a mandatory affordability requirement is essential for very low income residents of downtown Los Angeles. The Planning Department’s reliance on voluntary incentives lacks any guarantees that projects will actually include affordable units.

Skid Row deserves better.  As I discuss in Generation Priced Out: Who Gets to Live in the New Urban America,  Seattle, Austin, San Francisco and even parts of Los Angeles have granted developers height and density bonuses in exchange for mandating affordable units; land use policies in Skid Row and the surrounding area should follow this pattern.

Los Angeles has an historic opportunity to create something special at Skid Row. And by special we mean a community of economic and racial diversity that sharply contrasts with how cities have too often treated low-income neighborhoods near downtown.

Two-thirds of families living in poverty in the LA metro rental market pay more than half of their incomes on housing. Nearly 60,000 people are homeless on any given night, with Skid Row representing the epicenter of this crisis.

Two steps are essential to ease Los Angeles’s housing crisis: First, the city must build a lot more housing to meet rising population and jobs growth. Second, it must provide more affordable housing for those struggling most, especially people on the streets or at risk of homelessness.

Few places are better suited to advance these two objectives —aggregate production and affordable housing — than the downtown area. It’s where developers want to build, neighbors don’t object to tall buildings with greater density, and suitable places for affordable housing are easy to identify.

Yet despite this enormous opportunity for a win-win solution revitalizing Skid Row without displacement, LA’s planning department is turning to the standard Hollywood script of demolition and displacement for improving low-income neighborhoods.

Los Angeles can and must do better.

Affordability Must be Mandatory

Los Angeles has long resisted inclusionary zoning in favor of voluntary incentives. While such inducements have created in a few thousand units in recent years, their impact is nearly undetectable in a city of 4 million residents.

First, they ensure that affordable units get built at the same pace as the accompanying market-rate units. This is not assured when payments are made into an affordable housing fund.

Third, inclusionary zoning promotes the racial and class diversity that Los Angeles prides itself on. The Skid Row affordability plan should implement this goal.

Finally, if the city allows builders to make a financial contribution for affordable housing rather than include affordable units on-site there is no assurance that any below-market units will be built in the transformed Skid Row. And even if the funds were restricted to nonprofit affordable projects in Skid Row, securing the millions in additional funding necessary to break ground could take years.

Los Angeles needs affordable housing across the city. But Skid Row has existing residents who deserve permanent affordable homes in the neighborhood and a mandatory inclusionary requirement is the best way to ensure this.

In the city’s rezoning proposal, new policies to recode industrial tracts for residential use will dramatically increase land values. Inclusionary housing can recapture that added value for affordable housing. Affordable housing set-asides are a proven tool to help the real estate industry serve the people that it ought to be able to serve.

It’s contradictory for city planners to recognize the necessity of affordable housing for a fraction of Skid Row, when concentrated poverty and lack of affordable housing are equally severe in other parts of the neighborhood they would carve off. The only difference is that these unprotected areas are ripe for gentrification.

Skid Row is a unique neighborhood with a huge population of highly vulnerable people. Its 54-block area is well established in city policies and legal settlements like Jones v. City of Los Angeles that spell out the neighborhood’s boundaries. The same affordability policies that make sense in the protected portion are true for the entirety of Skid Row.

Beyond the boundaries of Skid Row, downtown Los Angeles has ample room for new housing construction. LA’s Department of City Planning envisions the addition of 70,000 units by 2040. This housing can help relieve the region’s housing crunch, but the end goal should be a mixed-income community with market rate housing as well as affordable set-asides. This plan must also protect Skid Row residents from displacement while creating the type of supportive housing that is desperately needed for those living on the streets.

In the absence of mandatory set-asides and anti-displacement protections, the Department of City Planning’s rezoning proposal will make downtown Los Angeles even less affordable. Land use planning should not betray the needs of existing residents. The city cannot apply zealously this principle to serve homeowners in Brentwood or Bel Air but then ignore its application to tenants in Skid Row.

Some will be skeptical that a neighborhood bordering new downtown office towers and luxury housing can really remain affordable. But as co-author Randy Shaw explains in his book, The Tenderloin: Sex, Crime and Resistance in the Heart of San Francisco, few believed that San Francisco’s Tenderloin could avoid an upscale transformation.

Like Skid Row, the Tenderloin is surrounded by some of the most expensive real estate in the world. It has Union Square to the north, Hayes Valley to the West, downtown to the east and upscale SOMA to the south. Yet Shaw shows how zoning changes, the protection of tenants and rent-controlled housing, and the aggressive construction of affordable housing prevented the Tenderloin’s gentrification.

Skid Row can follow a similar path. It’s ultimately a question of whether Los Angeles city officials will turn Skid Row into a model for transforming low-income neighborhoods, or into the latest example of a city’s broken commitments to its poor.

Randy Shaw is Editor of Beyond Chron and author of Generation Priced Out: Who Gets to Live in the New Urban America. Jerry Jones is Director of the Provider Alliance to End Homelessness, a coalition of 70 organizations in Los Angeles that provide services and housing to people experiencing homelessness.

Randy Shaw is Editor of Beyond Chron and author of Generation Priced Out: Who Gets to Live in the New Urban America. Jerry Jones is Director of the Provider Alliance to End Homelessness, a coalition of 70 organizations in Los Angeles that provide services and housing to people experiencing homelessness.