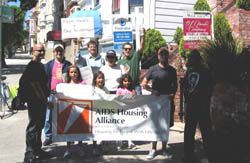 Activists came out in force–and numbers–Sunday as the San Francisco Tenants Union delivered an 11-site strike against realtors attempting to sell properties where tenants had been evicted to create vacancies as tenancies in common (TICs). Approximately 60 activists citywide picketed these locations, informing prospective buyers of both the legal and financial risks as well as the dubious morality of purchasing a home created by eviction.

Property owners have been invoking a state law known as the Ellis Act, which was designed to assist landowners who wish to exit the real estate business. Under the Act, a landlord has to evict all tenants if he or she wants to go out of business.

However, some landowners have used the Act to evict elderly, disabled and working-class tenants, only to claim Tenancies-In-Common (TIC) status. Landowners can sell TICs to wealthier clients who share mortgage and liability. Meanwhile, landowners seek condominium status, which would enable them to rent out individual units with individualized rent and liability.

Thus the activists’ strategy, says the Tenants Union’s Ted Gullickson, was to picket in front of known Ellis evictors, with the goal of intercepting potential TIC clients and explaining that tenants had been evicted. “If there’s no buyers, then there’ll be no evictions,” Gullickson explains.

Surprised bystanders watched as picketers chanted slogans and wielded signs in front of normal-looking properties such as Zephyr Real Estate’s building at 4125 24th Street. “E-V-I-C-T isn’t how it ought to be!” ran one chant.

Gullickson was generally reserved in describing the strike, but he said the turnout was “very impressive.”

About 60 protesters throughout the city distributed flyers and conversed with passersby about TICs. They were also able to chat with potential residents who had come to visit the TIC open house. “We’re just trying to remind consumers in San Francisco about the unethical history of what they’re buying,” explained one protester named Bobbie.

Consumers’ responses varied. While some were apparently moved by the picketers’ message, at least one shopper expressed his indifference to the evictions: “I think it’s fine.”

Matters are not so fine for Pam, who has lived in the same unit for 30 years, and who is currently the last rent-protected tenant in her building. “I don’t wanna move,” she says, but she has no means of fighting Ellis eviction. As a retiree with a fixed income, Pam would be left with few options if she was evicted.

Moreover, as a former nurse who is disabled due to a work-related injury, “I cannot afford to live in this city,” she says. “I have to move. Where do I go?”

At the 24th street location, a woman naming herself as a real estate agent came out to disagree with the protesters’ claims that the TICs cannot be legally converted to condos.

“I think they’re incorrect,” she said. “The TIC can be converted.” The woman refused further comment.

The Tenants Union disagrees. According to Section 1386 of the municipal Subdivision code, they say, landlords are forbidden to convert TICs to condominiums if that conversion was the reason that they evicted tenants.

Pam, meanwhile, is worried about an uncertain future. “San Francisco is going to be a town of rich people and homeless people.”