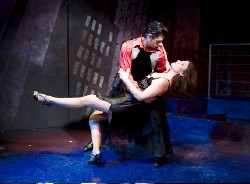 “LANDSCAPE OF THE BODY” – A TWISTY TOP-NOTCH THRILLER; “IT’S AMAZING HOW A LITTLE TOMORROW CAN RECOMPENSE A LOT OF SORROW” — from one of Rosalie’s songs

John Guare’s play “Landscape of the Body” didn’t even run a month when it first opened in New York’s Public Theater in the Fall of 07. To many, the play will seem like a jigsaw puzzle, there is a lot going on here. Betty leaves Maine and comes to New York to stay with her sister, Rosalie. Betty is just getting ready to settle in with her 14-year old son, when her sister is killed in a hit and run. Then Betty gets a job with a man, who likes to wear a Rita Hayworth kind of frock. Betty is just beginning to make a little money working for her very odd, but interesting employer (Gabe Marin).

But poor Betty – her employer is shot by mistake at a Bank. And that’s not all. Her 14-year old, who has been pals with some juvenile no goodniks, was (in a-round-about way) the reason that her employer gets shot in the bank. He later is de-captivated by one of his hoodlum friends.

Meanwhile, Betty’s glamorous sister Rosalie is dead, but not out of sight. She pops up every now and then, looking like a Cabaret Star who sings soul-searching songs. What may confuse people are the multiple flashbacks. The action starts with Betty writing notes on the deck of a Ferry. She stuffs the notes in small bottles and throws them overboard into the water.

Betty goes from hope and despair. One day there is promise, and the next day disaster. Along the way comes a rich man Durwood Peach. He was an old boyfriend of Betty’s, who has become a Millionaire. He says that he wants to marry her and he gives her a thousand dollars for her to travel to North Carolina. He declares that he would give up his Mansion for her, because the only landscape that is cares about is the ‘landscape of the body.” And that would be Betty’s. Betty is floating on air for a time. When she gets there, the family would not let her into the house. They inform her that Durwood was in a mental hospital, the same one that he escaped from. They give her $50 bucks to catch a bus back to where she came from. Another of Betty’s dreams fall apart.

Guare’s play is certainly witty and gritty. The exhilarating intense and disturbing acting keeps you on the edge of your seat. Here’s the deal. The play is not all doom and gloom. There are many elements that very comedic. I know that everyone expects perfection in a theatrical piece. Well, let me tell you … YOU GET IT IN THIS PLAY! Let’s just say that it’s insanely brilliant.

Maybe the reason it ran less than a month in New York is because they didn’t have the cast that is in San Francisco. THEY ARE: Susi Damilano (Betty) who is unwaveringly astonishing. Rana Kangas-Kent (Rosalie) literally sets the stage on fire. Gabriel Marin (Raulito, Durwood Peach), has again slammed the petal to the metal, showing again what a great actor he is. Alexander Szotak (Bert) could be Benjamin Button, he is that good. (Hey Hollywood, looking for a believable kid actor?) Andrew Hurteau (Captain Marvin Holahan) gives new meaning to a love hate relationship with a good cop, bad cop) … remarkable acting.

AT THE SF PLAYHOUSE (Sutter near Powell Street)

Did you see the steam rising from the Post Street Theatre? It’s no wonder, because on the stage is the most sweaty and steam driven dance show that I have ever seen live. The stars of the high speed and high tech Dance-A-Rama called “Burn Baby Burn” is a combination of “Tap Dance”, “Stomp”, “Lord of the Dance” and “Dancing with the Stars, plus a little bit of “Cats” (on high octane) purring and gyrating (the Gals and Guys) – performed by handsome guys with six pack abs and tight butts. Hey, if you had to dance non-stop, you could look that good. The girls look like Victoria’s secret models — and yes, they are extremely, sexy, talented and beautiful.

This fast moving Dance show is packed with so many pleasures of the unexpected, even from the audience. While standing in line at intermission to get into the ‘men’s room’ – a tall man, who seemed to be a bit under the influence of something said to a man in line – “This is great! I think I got off at least three times…I haven’t seen anything like this since I was in High School!” – unknown man, from the audience. Well, that must have been one sexy high school. My High School was nothing like that. But I see his point – or is it pointer?

This huge and impressive show has plenty of ‘muscle’ as the non-stop dance routines seem to go on and on. It’s a miracle that the cast is still breathing after the show. Maybe, they have an ambulance waiting for fainting audience members and actors. I learned that they go through about 90 bottles of water back stage during the show. The pace is frenetic and the costumes are stunning. It’s amazing what those “Costume Gods” can do. It all is part of the excitement on the stage. The audience kept jumping up and down like Pogo sticks. Remember them?

“Burn” is a Dance Masterpiece that’s wickedly thrilling. Not only is there the exhilarating dance numbers, the lighting is also fabulous. The entire Theatre becomes a huge ballroom – with sparkly spinning lights everywhere. To give you more of the experience – the dancers come into the audience and shake various parts of the body in front of you. Now, that’s realism. The Music is also terrific, with live wonderful percussion sounds. And if that’s not enough to rivet you – then the singing from some members of the cast will add to the spectacle with songs like Tina Turner’s ‘Rolling’. The rendition is gritty and daring. What a treat.

How do the marvels on the stage remember all the precision moves that they make? They rehearse for four hours before each show, that’s how. Only the Australians could do this and survive. Me, after four hours of rehearsing – I would be on a stretcher.

Take it from me – “Burn” is lightning-fast, raw and slick!

There are many hilarious double entendre things said in the play and truly funny asides like this: The doctor’s wife in conversation with her husband: “Madame Bovary was not a woman.” The doctor answers: “He was French, which is much the same thing.”
The Doctor’s assistant says: “No man has ever said anything to me, but pass the clamp.”

Talking about Health the Doctor offers this gem. “Small women should eat large animals.” “Eat” is said in such a way that is brings roars of laughter. Also very entertaining and interesting is the display of ancient Vibrators in the Lobby of The Berkeley Rep. Now that’s a very unusual introduction to see the actual instruments that were used in the early days of Doctors.

Powerful, descriptive writing is the main thing in this play. Sarah Ruhl is a natural storyteller. Although Lap slapping funny the story is also emotionally gripping. It’s definitely a rare gift. The cast of just Chock-Full of talented people are: Hannah Cabell (The Doctors wife) is just amazing, Stacy Ross (Annie, the staid Doctors attendant has not many words to say – but carries a huge impact on the mood of the day), Paul Niebanck (The Doctor) it was such fun to see the Doctor PLAY Doctor, Maria Dizzia (who becomes addicted to the Vibrator – is just extraordinary, John Leonard Thompson (Mr. Daltry gives a cool, strong performance), Melle Powers and Joaquin Torres (are superb actors). Great and amazing direction by Les Waters.

AT THE BERKELEY REPERTORY THEATRE

(beyondchron has over 1.5 mil. Viewers a month) – Alexa.com

CITY HALL, COIT TOWER, THE FERRY BUILDING AND THE WAR MEMORIAL VETERANS BUILDING WILL TURN GREEN TO WELCOME “WICKED” BACK HOME. The city’ great monuments will be lit green to celebrate the open ended engagement of the new San Francisco company of “Wicked” that is now playing at the Orpheum Theatre. WICKED made it world premiere in 2003, right here in San Francisco. And now it is back where it belongs – among the rest of the Witches. O.k. I will include myself. Look for me at Opening night tonight (Friday) – I will be wearing my special Green Witch glasses. See you there – and be sure to paint your brooms Green. www.shnsf.com

INTERNATIONLLY SPEAKING. There will be a celebration of Ukrainian culture at the San Francisco Public Library. The celebration will be directed by Ivanna Tartula Flipenko of the Julivanna Music Studio – www.julivanna.com.

The bilingual program will present Ukrainian folk music, songs, dances and costumes. All the performers will be wearing national costumes representing the various region of Ukraine. The program takes place in the Koret Auditorium at the SF Main Public Library – Saturday – March 7, from 2p to 4pm. And here more good news…IT’S FREE!