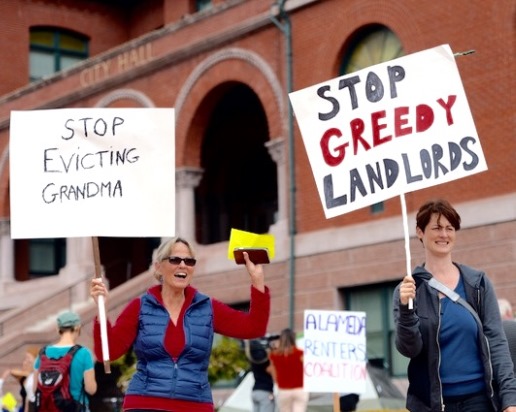 Five Bay Area cities vote on rent control measures in November. In response,  landlords and the real estate industry are  spreading mistruths about this vital policy. Some of these falsehoods have been repeated since Berkeley sought to pass rent control in 1971; voters in Alameda, Burlingame, Mountain View, Richmond and San Mateo can now expect to hear more of the same.

In the 1970’s and the 1980’s, the bogey man for rent control was the South Bronx. Anti-rent control campaigns insisted that New York City rent control laws led to the wrecking and eventual burning of that neighborhood. They suggested that the same would happen in Berkeley, San Francisco, or Santa Monica if strong rent control were enacted.

Well, that didn’t happen. In fact, all three cities are more prosperous today that when their rent control laws first passed.

Yet this reality of other rent control cities has not stopped today’s opponents from repeating these claims. Groups like The East Bay Rental Housing Association, opponents of Alameda rent control, insist that protecting tenants discourages landlords from making repairs and causes neighborhood decline. Landlord groups still use these arguments despite the prosperity of rent-controlled cities.

Landlords also continue to claim that they are being unfairly “singled out” to pay the price of what is a broader problem. I’ve heard versions of this argument every time activists have tried to pass not just stronger rent control, but any law regulating land use.

The truth is that every owner faces regulations on how they use their property. All are severely impacted in their freedom of use by zoning restrictions and/or height limitations.  Laws preventing homeowners from selling their land for highrise development do far more to reduce their property’s value than rent control and just cause eviction laws. Yet nary a complaint is uttered about these laws restricting property owners’ individual profits for the greater good.

The “singling out” argument is popular because it allows landlords making big profits from unlimited rent increases the chance to play victim. Anti-rent control campaigns routinely highlight how unfair such laws are to landlords, as if this burden is worse than tenants being forced to move out of their longtime homes on sixty days’ notice due to a huge rent increase they cannot afford.

I’ve found that the vast majority of San Francisco landlords I know have no problem with rent control or just cause eviction. Yet landlords in cities facing rent control initiatives are unlikely to hear such views, instead falling prey to the scare tactics of the realtor and apartment associations.

Homeowners voting in Alameda, Burlingame, Mountain View, San Mateo and Richmond should understand that rent control and just cause eviction laws are in their own self-interest. That’s because such laws strengthen and improve neighborhoods.

Think about the traditional stereotyping of renter neighborhoods. They are said to be  filled with residents whose transiency deters them from investing time or money in the community. Residents who could be forced to leave their homes on short notice are understandably reluctant to put down deep roots in the community. Why join the local neighborhood group, or engage in tree planning or other neighborhood beautification efforts when you could soon be gone?

Rent control and just cause eviction changes this dynamic. Tenants protected by rent control have the same stake in neighborhood improvement as homeowners and landlords. Most are far more involved in local activities than absentee owners who rarely visit the community and contribute little to supporting neighborhood businesses nor attend local events.

Rent control makes for successful neighborhoods. So if you are a homeowner deciding how to vote on rent control this November, a yes vote serves social and economic justice as well as your own self-interest. And considering that homeowner votes will likely be decisive in all five cities, rent control backers should be making this case.

Rent control and just cause eviction laws also promote economically diverse neighborhoods. As I have previously described, Alameda’s economic diversity will be lost without such tenant protection laws. Rent control offers Richmond its best chance of protecting its ethnic and racial diversity and its still affordable status.

Rent control’s ability to slow gentrification is why communities up and down the West Coast have been pushing for such measures. This includes Portland and Seattle, both of whom are currently barred by state law from enacting rent control.

Landlord claims that rent control and just cause eviction laws don’t solve the “root causes” of the housing crisis are wrong. When the root cause is the lack of affordability, laws designed to ensure affordability are the most direct approach. Building more housing, which I strongly support, helps tenants looking for housing but does far less to stop tenant displacement.

Rent control is a prerequisite for slowing or stopping gentrification. And is has a proven track record of success in this goal. The main threat to San Francisco tenants are evictions under the Ellis Act, a state law that preempts local just cause eviction laws.

The Ellis Act is the tip of the iceberg of what would happen if San Francisco had no rent control and just cause eviction. There would be nary a below market rent tenant in North Beach, the Marina, Noe Valley and other neighborhoods, and even the heavily nonprofit owned Tenderloin would be at extreme risk.

The San Francisco seniors who helped build these successful communities would also be long gone. In their place would be entire building filled with a constant turning over of newcomers who could pay the current market rent.

California rent control succeeded in high rent cities with strong senior tenant voting bases and where tenants were roughly at least half of the electorate. Oakland broke from this pattern with the victorious Prop EE in 2002. I worked on that campaign and its success in the low turnout November 2002 election showed the power of rent control’s social just message (Oakland has a November ballot measure to further strengthen its rent control and just cause laws).

Alameda has the type of organized renter’s campaign that can bring victory despite the lack of a dominant tenant electorate. Richmond’s electorate well fits the rent control winning profile, and it has a grassroots organization—the Richmond Progressive Alliance—with a track record of winning local elections.

The Mountain View, Burlingame, and San Mateo races are hard for me to assess because I have no direct sources. I know from working with Fremont tenants in the late 1990’s how hard it is to pass rent control in the South Bay, but I’ve heard a lot of optimistic reports on Mountain View’s chances.

History shows that it is harder to pass rent control initiative the first time they appear on a city’s ballot because the heavily funded landlord opposition campaign is more effective with uninformed voters. The more people know about rent control the more they support it, which is why activists in cities whose measures lose in November need to return to the ballot soon.

It’s exciting to see so many Bay Area residents doing something concrete to address the affordability crisis. Nobody should be subject to the $1000 monthly rent increases that non-rent controlled cities’ allow, nor should longtime residents be forced out of their homes and neighborhoods for no reason other than their landlord’s whim.

Randy Shaw is Editor of Beyond Chron. He discusses how to win rent control campaigns in The Activist’s Handbook: Winning Social Change in the 21st Century.