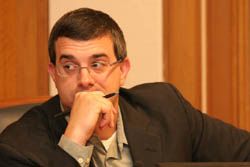 Residential hotel owners and managers who play “musical rooms” with their tenants may have to end their unlawful games. At a meeting yesterday the Land Use Committee voted to pass, with recommendation to the full Board of Supervisors, an ordinance amending the San Francisco Administrative Code Section 41.9. The ordinance, proposed by Supervisor Chris Daly, would require additional reporting and recordkeeping by residential hotel owners and managers and would establish further inspection to ensure compliance with California Civil Code Section 1940.1, which helps protect tenant rights.

If supported by the full Board, the amendment to Section 41.9 would further protect tenant rights by helping curtail the practice of musical rooms, whereby owners and mangers of residential hotels force occupants to move or check out of a room prior to 30 days of occupancy so they can deny residents the rights otherwise awarded to anyone paying rent and living in a room for 30 continuous days.

According to the legislative digest, there is a shortage of clean, safe and affordable housing in San Francisco. This shortage most severely affects those who are least equipped to cope with it, including elderly, disabled and low-income persons.
“The housing emergency is further exacerbated by the practice commonly referred to as musical rooms,” the digest reads.

As the law exists, Section 41.9 requires that residential hotel owners and managers maintain certain records, including daily logs and rent receipts. The section also requires that they allow the Department of Building Inspection to review those records. Prior to the meeting, Daly said that this current law is insufficient.

“The rent receipt law was the first step, and it has helped. But it isn’t really the tool to adequately stop the musical rooms,” Daly said.

The unlawful practice of musical rooms is unsettling and disruptive to an already downtrodden segment of the population, many of whom report sleeping on the streets or in homeless shelters while they are without a room. Often during their period of non-residency occupants lose or find damaged the few possessions they own.

“On a larger scale this practice increases homelessness, both in the short and long term, has a profound effect on low-income, disabled and elderly tenants, and fosters instability within the community,” according to the digest.

Inhibiting this unlawful practice of musical rooms would allow occupants of residential hotels to acquire their due tenancy rights. Yet as Daly pointed out, it is difficult to prove that an owner or manager is playing musical rooms.

“If in the third week a hotel manager doesn’t want to rent to you, they can give almost any reason in the book,” he said. “I don’t like you, or you look funny are good enough reasons,” Daly scoffed.

Under the proposed amendment, however, it would be more difficult for owners or managers to continue their pattern of checking occupants in, checking them out, checking them in again, and so forth.

Recommended to Daly by the City Attorney’s Office, the ordinance would amend San Francisco Administrative Code Section 41.9 to require additional information on the daily logs and rent receipts, and would require that resident hotel owners and managers make their records available not only to the Department of Building Inspection but also to the City Attorney’s Office, who then may take further action to ensure compliance with California Civil Code Section 1940.1

“The city recognizes the importance of housing for the elderly, disabled, and low-income,” said Deputy City Attorney Neli Palma, adding that with the amendment, San Francisco would be putting teeth into legislation that would fight the unlawful practice of musical rooms.

Henry Karnilowicz of the SRO Hotel Safety and Stabilization Task Force, on the other hand, feels the amendment would be just another layer of bureaucracy. “The Task Force saw this for the first time today,” he said of the proposed ordinance.

“This is not just a clarification, this is an amendment,” Karnilowicz argued while urging the Committee to table the ordinance until after the Task Force had more time to review it.

Yet when Daly asked if Karnilowicz spoke for the entire Task Force, he admitted he did not. Daly then said he believed the majority of the Task Force would be in favor of the amendment.
“It’s an important change,” he said.

Daly added that among other things, the amendment would help prevent the keeping of “dummy logs,” or fake occupancy records.