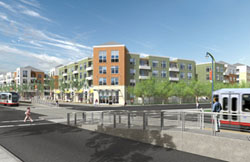 Yesterday, the San Francisco Redevelopment Commission decided to dramatically expand Redevelopment Agency control of Bayview-Hunters Point. Real estate developers, land speculators, property owners, favored nonprofit groups, and Mayor Newsom have the most to gain from expanding Redevelopment, while non-subsidized tenants, small business owners, seekers of affordable homeownership, the San Francisco Board of Supervisors, and taxpayers citywide have the most to lose. But much of the testimony at Tuesday’s hearing was about race, as African-American opponents of the Redevelopment takeover ask why their neighborhoods continue to be targeted for “urban removal.” Yesterday represented an all too familiar story.

Bayview-Hunters Point represents the last major undeveloped neighborhood in San Francisco. Should the neighborhood’s gentrification be expedited through a strategy that denies residents control of land use decisions and jeopardizes the city’s longterm financial future, or should the largely African-American neighborhood maintain control of proposed developments in its community, with the taxes generated benefiting not just Bayview but the entire city?

The debate over expanding Redevelopment Agency control of the Bayview involves two distinct issues: the future of San Francisco’s last remaining African-American community, and the citywide budgetary impact of diverting hundreds of millions of dollars in taxes generated in the neighborhood from the general fund to the Redevelopment Agency.

Bayview-Hunters Point, like all neighborhoods in San Francisco, has seen property values and home prices steeply increase over the past decade. New housing built in the community is not affordable to existing Bayview residents, and this includes the vast majority of the 1200 units that the Agency contracted with Lennar/BVHP to build at the Hunters Point Naval Shipyard.

Bayview real estate will appreciate in the next decade with or without Redevelopment. But many African-American activists wonder why liberal San Francisco would bring in an Agency to both facilitate and expedite a process that nobody disputes will reduce the neighborhood’s low-income, African-American population.

Quickening the pace of Bayview gentrification is great for land speculators and developers who already own land, but not so good for the area’s tenants. As the Redevelopment Agency uses public dollars to upgrade the neighborhood’s attractiveness, tenants will increasingly be evicted from their newly desirable homes and replaced by TIC owners seeking to convert the former rental housing to condominiums.

At Tuesday’s hearing, Agency defenders argued that Redevelopment is actually needed to produce affordable housing in Bayview. But the Lennar deal, in which 80% of units will be market-rate, says otherwise. So does the Agency’s past forty years in San Francisco, in which the Fillmore, SOMA, and Golden Gateway were made as upscale as possible so as to generate the maximum property taxes increase necessary to fund the vast Redevelopment bureaucracy.

As for the nonprofit housing the Agency will build, its value depends on the details. Bayview residents will have no control over who lives in such housing, where it is built, or who develops it (anyone doubting this should recall 6th Street’s Plaza Hotel). If enough money is spend some good affordable housing will inevitably be created, but such projects will have little impact in reducing the gentrification caused by the Agency’s for-profit activities.

The biggest beneficiary of expanded Bayview Redevelopment is Mayor Gavin Newsom. If the Mayor-appointed Commission approves the Plan on Tuesday, and the Agency takeover is then ratified at the Board of Supervisors, Mayor Newsom will have an opportunity for patronage of a scope and scale that must leave former Mayor Willie Brown green with envy.

The Mayor will have nothing less than sole control over who gets to build on every piece of land covering 1200 acres.

Never in the long history of San Francisco has any Mayor been given such power. Gavin Newsom won’t have to be on the phone for hours trying to raise money for his re-election campaign, because developers eyeing sites in Bayview will be lining up to donate. And Newsom and his successor will have no trouble lining up precinct walkers in Bayview come election time—they’ll have a huge pool of eager beneficiaries of Agency largesse from which to choose.

Willie must really regret that he did not try to overturn term limits.

What makes this deal so sweet and juicy for the Mayor is that the Redevelopment takeover cuts the pesky Board of Supervisors out of the action. Supervisor Sophie Maxwell, who represents Bayview-Hunters Point, will lose influence over development in the chief part of her district where such building is likely to occur.

And Agency patronage extends far beyond choosing developers. Rather, it includes funding jobs programs, small business assistance (more Starbucks!), and a healthy dose to nonprofits that toe the Agency line.

Why any member of the Board of Supervisors would support this mayoral usurpation of their land use power is a mystery. And the kicker for Supervisors like Sean Elsbernd and Fiona Ma who are always talking about the city’s infrastructure problems is that property taxes from the thousands of housing units built in Bayview will be diverted from fixing streets, sidewalks, and parks to expanding the Redevelopment Agency.

That’s the second problem with Redevelopment: it diverts money that would otherwise go to vital citywide services.

I have previously described the Agency’s attempt to steal tens of millions of taxpayer dollars from Mid-Market development projects like Trinity Plaza that it played no role in stimulating. But the amount of property taxes generated from development of Bayview-Hunters Point in the next decade—projects that will be built with or without the Redevelopment Agency—could even exceed Mid-Market. If both Redevelopment Areas are approved, more new property tax revenue will soon be going to the Agency than to the City and County of San Francisco.

Maybe we’ll have to elect a Mayor of Redevelopment, since the Agency will be controlling the city budget.

Prior to Hurricane Katrina, the Redevelopment Agency takeover of most of Bayview-Hunters Point was a done deal. But with daily stories about the government’s role in the avoidable displacement of New Orleans’ African-American community, San Francisco’s political leaders may think twice before becoming complicit in what many Bayview activists believe is a similar agenda.