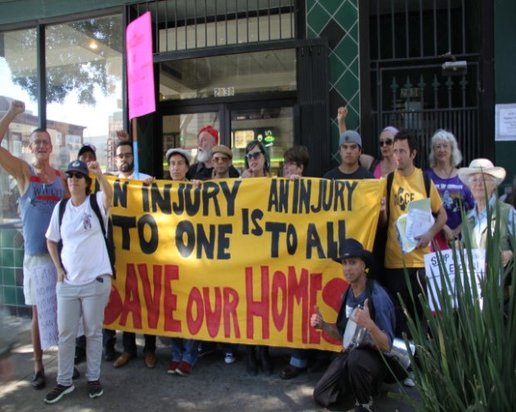 In another tenant victory over an Ellis Act eviction, Sergio Lainez, wife Magaly Silva and their three children have stopped their fourth Ellis eviction lawsuit at 2832 24th Street. Sergio Lainez has lived in the Inner Mission building since 1992.

On October 9, Judge Ronald Quidachay dismissed the most recent unlawful detainer suit against the Lainez family by granting a motion for summary judgment in their favor. The summary judgment motion was granted on two grounds:

1. Ineffective certification that actions had been initiated to terminate tenancies by service of notice of termination of tenancy, and

2. Failure to describe who a senior or disabled qualified tenant is for purposes of extending their tenancies as permitted under the Ellis Act, and simply attaching a copy of the Rent Ordinance sections is insufficient.

This most recent Ellis notice of termination of tenancy was served on the Lainez’ on May 16, 2013 and the unlawful detainer lawsuit was filed on May 20, 2014.

The property is owned by Leona Fong as trustee for two Fong family trusts; they own several business and residential properties in the Mission. Sergio is a member of ACCE (the Alliance of Californians for Community Empowerment) and the activist group conducted multiple protests on his family’s behalf.

The Lainez ruling is the latest case to prove the importance of tenants contesting Ellis evictions. Last month, another group of Mission District tenants stopped their eviction at 3305 20th Street.

Eviction Free San Francisco and other tenant groups joined with the tenants’ effort to stop speculator/owner Kaushik Dattani’s effort to add their home to his list of Ellised-properties.

In August, the court stopped the eviction of tenant leader Teresa Flandrich at 513-519 Lombard. In March, the Ellis eviction of the elderly Latino Alfaro family from their Lucky Street home was also halted after a long legal battle. The Alfaro’s attorney, Raquel Fox, noted at the time, “This case again shows the importance of tenants fighting against their evictions, and of vigorously litigating these cases. Many people think that tenants have no defenses to Ellis evictions, and the story of Lucky Street will hopefully convince people otherwise.”