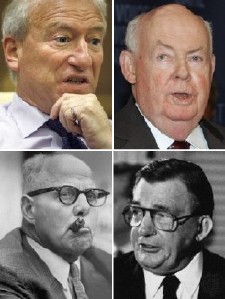 In March 2009, then-SEIU President Andy Stern was optimistic about labor’s progress in President Obama’s first year. Stern told me that of labor’s top three priorities – universal health care, the Employee Free Choice Act (EFCA), and comprehensive immigration reform – he expected the first two to pass in 2009 if not all three; he even joked that labor might have no legislative program left for 2010.

But despite spending over $150 million in 2008 to elect Obama and a pro-union Congress, organized labor’s legislative program failed. And it failed without much of a fight, as both SEIU and the AFL-CIO proved incapable of seizing upon labor’s best if not last chance to meaningfully reverse declining private sector union membership. Labor’s ongoing failure to achieve its national legislative goals speaks to an institutional dysfunction that transcends particular union leaders, and requires a dramatic shift from funding political campaigns to financing ongoing worker organizing.

Organized labor had an historic opportunity in 2009 to start reversing a sixty-year decline in private sector union membership from 34% in 1948 to less than 10%. But unions never mounted a powerful national grassroots campaign for either labor law reform or comprehensive immigration reform in 2009. When a drive for the latter began in early 2010, the labor movement had already given up on labor law reform without a Congressional vote or even a public fight.

Why did the labor movement suffer such an epic fail?

Ironically, it would be SEIU, the union that invested the most money in Democratic electoral success in 2008, that would start taking labor’s legislative efforts off track.

First, shortly after Obama’s inauguration, SEIU placed its third largest local – California’s SEIU-UHW – in trusteeship. SEIU has already spent over $50 million on this continuing battle, diverting dozens of staff away from working on labor law reform in key states and districts to spending time in California to convince SEIU’s current workers not to decertify and join rival NUHW.

Two months after President Obama took office, SEIU was engaged in two major inter-union fights that had nothing to do with enacting its top three legislative priorities. And these struggles divided the labor movement at a time when unity was most essential to overcome rising corporate and/or Republican opposition to labor’s legislative program.

While SEIU’s decision to wage internal union fights at the worst possible time helps explain labor’s 2009-10 failures, the AFL-CIO also failed to aggressively and publicly mobilize for its agenda.

While the AFL-CIO devoted significant resources to grassroots organizing for labor law reform in 2009, it operated below the national political radar screen. Neither the general public nor key politicians got the sense that labor was out mobilizing, as occurs when unions organize around elections.

The AFL-CIO was also distracted by the imminent power shift from longtime President John Sweeney to his long-anticipated successor, Richard Trumka. This shift would not be formalized until the September AFL-CIO convention, and uncertainty over future personnel changes among the “Sweeney” and “Trumka” factions hindered the federation’s push for its legislative program.

If labor’s colossal failure in 2009-10 could be attributed to leadership out of touch with political reality, then the solution would be easy: get new leadership. But Stern, Sweeney and Trumka all rose to power as “reformers” who understood that labor faced unprecedented challenges that demanded new strategies. Sweeney’s election as AFL-CIO President in 1995 was supposed to represent a dramatic break from the politically stagnant policies of longtime AFL-CIO President Lane Kirkland, and his even more conservative predecessor George Meany.

After a decade of continued private sector membership decline under Sweeney, many of his former allies felt a new direction was needed. Among these was Andy Stern, whose SEIU joined with the Teamsters, UNITE HERE, and other unions in forming the Change to Win labor federation in 2005.

From 2005 to his abrupt resignation in 2010, Stern was the labor movement’s biggest media star. Academics and journalists heralded Stern’s recognition that the labor movement had to change or die, and the SEIU leader was widely hailed as the rare national labor leader who understood how unions must adapt to the challenges of the 21st century.

Based on the Sweeney-Stern experience, we can either conclude that these two people were poor leaders, like seemingly all prior AFL-CIO leaders going back to the 1940’s, or that the labor movement suffers from an institutional dysfunction when it comes to harnessing its power outside the electoral arena.

Both may be true, but the evidence for the latter is overwhelming.

And the institutional problem is no mystery.

While Stern should have been spearheading a campaign for some form of labor law reform in 2009, he was instead measuring his success by the many invites he got to the White House. Sweeney, Kirkland, Meany and prior AFL-CIO leaders used a similar measuring stick – also demarking success by their securing a “seat” at various decision-making tables, and by presidential attendance at large federation or union meetings (recall Obama’s attendance at the Pittsburgh AFL-CIO convention in 2009 at a time when White House pressure to pass labor law reform was non-existent).

The labor movement is institutionally trapped between aggressively pursuing its agenda and holding its allies politically accountable, and its leadership’s desire to be warmly received by Presidents, Senators and other necessary targets of labor’s pressure. And this problem goes beyond Andy Stern or Richard Trumka, but is an endemic part of the labor movement that continues to restrict its political mobilizing outside elections.

The only way to change this dynamic is for labor to become less dependent on politicians. Unfortunately, this is contrary to the movement’s recent direction.

Both Sweeney and Stern vowed to increase labor’s role in politics. But after massive spending in the 2008 elections failed to get labor even a House or Senate vote on its most critical legislative priorities, unions must radically change course.

This means reinvesting in private sector organizing. SEIU itself invests relatively little in organizing such workers, and other unions have also put electoral work ahead of such organizing.

A major exception is UNITE HERE, which has long argued that it does not need government to tell it how to unionize workers. The union means that it does not need a new federal law to force employers to recognize unions through card check rather than an often tainted NLRB election; UNITE HERE simply organizes to force employers to accept the former.

UNITE HERE’s strategy reduces the importance of national politicians, undermining a central tenet of labor’s dysfunctional relationship; if labor does not need politicians, then White House visits are not so important, and maintaining cozy relationships with national Democrats is secondary to organizing workers.

Does the idea of labor leaders redirecting money from political campaigns to worker organizing sound like a pipe dream? Is labor’s long institutional history of leadership coddling up to powerful Democratic politicians too strong a bond to break?

Labor’s now 7% private sector membership and its increasing exclusion from once highly unionized businesses like new supermarkets (aggressively non-union Whole Foods and Trader Joe’s are both rapidly expanding) may give top union leaders little choice. Having failed in its political strategy, labor either goes back to organizing the unorganized or becomes even less politically influential on the national stage.