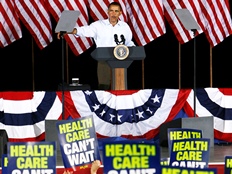 Like many labor negotiators, I looked to health care reform for legislative relief from endless haggling with management over employee benefit costs. My own union and others worked hard for passage of President Obama’s Affordable Care Act (ACA) three years ago. Despite its failure to take health insurance issues off the bargaining table, as a more preferable Medicare-for-All system would do, Obamacare was widely cheered by labor. Union members were told, correctly, that the ACA would expand Medicaid access for millions of lower-income Americans and make private insurance coverage more consumer-friendly for everyone else. Organized labor also expected the new law to aid union bargaining by leveling the playing field among all employers, much like the minimum wage and other protective labor legislation does.

Unions hoped that the ACA would restrain medical cost inflation and corporate pressure for health care cost shifting. Both trends have been a major cause of recent strikes or contract rejections at AT&T, Verizon, and United Parcel Service.

In frantic letters to Congress, national presidents of the Teamsters, Laborers, Hotel Employees, and United Food and Commercial Workers unions cite the multiplying “unintended consequences” of the ACA. Around the country, smaller firms are already outsourcing so they can keep their total head count below 50 and not be covered by ACA requirements. Larger ones, like Wal-Mart, are planning to hire more part-timers and schedule existing employees for less than 30 hours a week so they won’t have to cover their non-fulltime workforce.

Even unionized retailers like Stop & Shop, faced with higher ACA-imposed medical plan costs, are pushing back. The food store chain sought to eliminate health coverage for thousands of part-time workers in New England, creating what one union official called his most difficult negotiations in 40 years.

Under the ACA, federal subsidies for eligible workers who wish to keep their individual job-based insurance won’t help them add or maintain family coverage–because the cost of that is not factored into the ACA subsidy formula. Even lower-income participants in multi-employer plans (known as Taft-Hartley funds) may end up being disadvantaged if ACA rules don’t permit them to qualify for subsidies on the same basis as workers without union-negotiated medical benefits. In both the private and public sector, employers are already citing the ACA’s 2018 tax on mis-named “Cadillac coverage” to justify givebacks from employees who, in reality, only have a healthcare Chevy in their garage.

According to MIT professor Jonathan Gruber, a top White House consultant, this impending 40% excise tax on higher cost plans “is intended to shift compensation away from excessively generous health insurance to wages.” Yet few in labor believe that more premium sharing, higher deductibles and co-pays will translate into better pay for workers without a fight over that as well.

Race to the Bottom

The International Brotherhood of Electrical Workers, which faults the ACA for triggering a “race to the bottom with respect to benefits,” is one of those labor organizations still hoping that the White House will make “common sense corrections” in the ACA.

However, the only flexibility that President Obama has shown so far is delaying, until 2015, the law’s requirement that larger employers provide insurance or pay a penalty and postponing limits on out-of-pocket costs for health care consumers. The “people who’ve gotten special treatment are the business community,” complains D. Taylor, new national president of UNITE HERE. “Here’s what we’re saying: ‘You made the problem, you fix it.’ Here we have a situation you can’t blame on the Republicans.”

Labor’s love will certainly be lost, this Labor Day and future ones, if the ACA continues to punish the president’s friends and reward their corporate adversaries. In 2010, rank-and-file anger over Obama Administration plans to tax union members’ benefits produced a big labor vote in favor of Republican Scott Brown, when he briefly captured a vacant U.S. Senate seat in Massachusetts. The national GOP, which has no positive agenda for health care reform, may yet reap the harvest of wider working-class disillusionment with Obamacare.

One leading single-payer activist worries that labor disaffection with Obamacare will generate more calls for its repeal—a stand already taken by the Roofers Union—followed by “a return to the status quo ante.” He fears that a labor movement “more divided and cozying up to the Republicans to teach the Democrats a lesson” is not likely to find a better way forward.

To steer this discontent in a better direction, the Labor Campaign for Single Payer Healthcare has collected hundreds of signatures on an open letter to be distributed to delegates at the national AFL-CIO convention in Los Angeles, Sept. 8-11. The letter urges AFL President Rich Trumka to “push the envelope further” in “the cause of health care justice” by using the shortcomings of Obamacare to build stronger support for a system of tax-supported universal coverage that “would take healthcare off the bargaining table.”

Instead, there are strong indications that top AFL-CIO officials want to tamp down any public criticism of ACA and the president (even though they are hailing their 2013 convention as “a time for decisive action to answer the challenges facing working people.”)

Preventing the labor backlash against Obamacare from actually forcing a real discussion on the convention floor will take some doing. In a resolution passed earlier this month, even the Nevada AFL-CIO has joined the public chorus of Obamacare critics, noting that “our health plans only get worse” while the White House fails to respond to serious union concerns.

(Steve Early is a labor journalist, lawyer, and retired national staff member of the Communications Workers of America. He was involved, for many years, in bargaining with manufacturing and telecom firms in New England. He is the author, most recently, of Save Our Unions: Dispatches From A Movement in Distress, forthcoming from Monthly Review Press in November. He can be reached at Lsupport@aol.com)