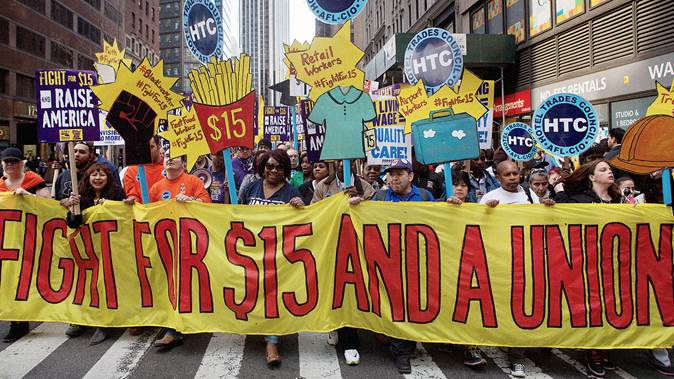 North Bay cities are joining the ‘Fight for $15’ movement. Sonoma approved the first citywide minimum wage law in June 2019 and Petaluma passed the second in July.

A 2018 UCB Labor Center report, on the economic impacts of citywide $15/hr. minimum wage laws in the North Bay­, shows that average incomes of approximately 9,000 Petaluma workers (working more than 2 hours a week inside city limits) will increase by $2900 annually. Contrary to the idea that most minimum wage workers are teenagers seeking a toehold in the labor market, the median age of workers receiving a pay raise is 33. On average, these workers contribute half of their family’s income.

The Alliance for A Just Recovery, a coalition of every major labor, environmental, immigrant rights, and faith-based organization in Sonoma County, leads the campaign to introduce minimum legislation in all Sonoma and Marin jurisdictions to establish a regional minimum wage higher than the state’s.

Why has the Fight for $15 Exploded Now?

President John F. Kennedy stated in 1963 “A rising tide lifts all boats.” More than a half-century later, only the wealthiest American’s yachts are rising while working families’ rowboats are sinking.

At national, state and local levels, wealth and income inequality now exceed the previous (1928) peak. The upper one percent owns 40 percent of the nation’s wealth — more than the combined wealth of the bottom 90 percent.

According to the California Budget and Policy Project, over the last four decades, the average inflation-adjusted incomes of California’s richest 1 percent climbed 125 percent, while those of the bottom four-fifths stagnated or declined. Since the recovery from Great Recession of 2007-2009 began, the upper one percent has pocketed 95 percent of income gains.

Nearly one-third of the Sonoma County workforce belongs to working-poor families, whose incomes are less than $63,000 annually and cannot make ends meet – particularly given the escalating cost of housing.

“The State of Sonoma County 2018,” a report commissioned by North Bay Jobs with Justice and the North Bay Labor Council, shows that between 2000-2016 inflation-adjusted wages remained flat for the bottom 60 percent but declined 11 percent for the lowest 20 percent of wage earners. Over the same time frame, median rents increased by 24 percent but median renter annual incomes rose only 9 percent­­. After the 2017 Tubbs fire, landlords hiked rents a stunning 35 percent.

The Fight for $15 in the States

In 2012 $15 an hour was a pipe dream when New York fast-food workers—earning $7.25 an hour—launched a series of one-day strikes to demand $15 and the right to join a union, with support from the Service Employees International Union.

This grassroots movement by low-wage workers—overwhelmingly immigrants, youth, women, and workers of color—has profoundly impacted public opinion; pressured local elected officials to approve both living wage laws (covering only workers employed by a city and city-contractors) and minimum wage legislation affecting nearly all workers in a city. Now it has ‘rippled-up’ to demand that state legislatures raise the wage floor.

California was the first state to mandate a $15 minimum wage in 2016. Since then, six other states (New York, Massachusetts, New Jersey, Maryland, Illinois, Connecticut) and the District of Columbia have approved a phased-in $15 minimum wage. States such as Arizona, Colorado, Maine, Washington, New Mexico, and Oregon have approved phasing-in lesser minimum wage increases of $12 to $14.75/hr.

Business and the Fight for $15

The Fight for $15, plus tightening labor markets and declining unemployment, have prodded scores of large employers to increase entry-level wages to $15 or higher. They include retail giants Whole Foods (owned by Amazon) and Target; such banks as Wells Fargo, JP Morgan Chase and the Bank of America; insurers Allstate, Aetna, and Nationwide; and such universities as Duke, Columbia, Washington, Minnesota, Virginia, and California.

A milestone in the Fight for $15 was McDonald’s announcement earlier this year that it would no longer oppose minimum wage increases at the federal, state, or local level.

The Fight for $15 cannot be sustained and deepened unless millions of low-wage workers organize to rebuild union membership in the private sector workforce. Private-sector union membership dropped from 35 percent in 1950 to less than 7 percent today. Collective bargaining is the strongest weapon that working people have for raising living standards and transforming bad jobs into good middle-class employment. According to a recent M.I.T. study, nearly half of all workers polled would like to join a union.

Also in 2018, 8,000 hotel workers in 8 cities won a nine-week strike against Marriott with picket signs stating, “One Job Should Be Enough.” San Francisco UNITE HERE housekeepers won a a pay increase of more than $4 an hour (over four years) raising the median wage to nearly $28 an hour, with enhanced health and retirement benefits that boost their total compensation to more than $41 an hour. Housekeepers also won unprecedented protections for sexual harassment (including GPS based ‘panic buttons’) and significant workload reductions.

In 2017, after a one-year organizing campaign 100 workers at the Santa Rosa Hyatt Vineyard Creek voted to join UNITE HERE, and in 2018 successfully negotiated their first contract.

The Democrats, 2020 Elections, and the $15 Federal Minimum Wage

The Democratic Party’s transformation also shows the Fight for $15 movement’s impact on public opinion and national politics. In 2016, Senator Bernie Sanders was the only Presidential candidate to champion a federal $15 minimum wage. Today all the leading Democratic presidential contenders support $15.

The Trump administration fiercely resists raising the $7.25/hr. federal minimum, even though it has not been raised in nearly a decade. This is the longest gap between minimum wage increases since the 1938 Fair Labor Standards Act established a national wage floor. The Republican-controlled Senate will not even consider the House-passed legislation, guaranteeing that the issue will loom large for the 2020 Presidential election.

If both a Democratic President and House–Senate majorities are elected in 2020, a $15 minimum wage will certainly be approved at the federal level.

The Fight for $15 shows that local grassroots organizing and political advocacy for economic justice can raise living standards for working people and impact state and national policy. Please see the following web sites for contact information and how you can become involved in the North Bay’s $15 citywide minimum wage campaigns: http://www.northbayjobswithjustice.org and https://ca.aflcio.org/nblc/

Martin J. Bennett is instructor emeritus of American history at Santa Rosa Junior College, a research and policy analyst for UNITE HERE 2850, and a member of North Bay Jobs with Justice.