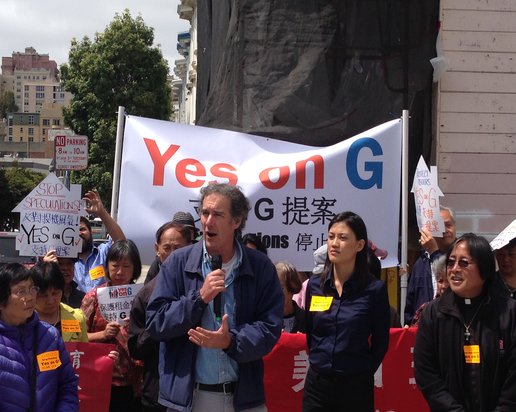 With the recent endorsements of Proposition G by the San Francisco Democratic Party, Senator Mark Leno and the San Francisco Labor Counclabor and community leaders gathered in San Francisco’s Chinatown on Tuesday August 19, at 12:30 pm to announce the launching of the ‘Yes on G’ neighborhood campaign. Proposition G would impose a surtax on real estate speculators who buy and sell off multi-unit apartment buildings in less than five years.

“We are launching this citywide campaign in Chinatown because this is a neighborhood that has been particularly hard hit by evictions,” said Rev. Norman Fong, longtime Chinatown leader. “We are losing too many families and seniors because of an out of control real estate market. We must act now.”

“Proposition G is essential to assuring that working people can continue to live in San Francisco,” said Mike Casey, president of Local 2, the hotel and restaurant workers union. “Our city is facing a crisis of affordability and real estate speculation is a key cause of that crisis.”

“If Proposition G had been in effect two years ago, the eviction of the Lee family and hundreds of other families across the City would not have happened,” said Cindy Wu, President of the San Francisco Planning Commission.

Also speaking was Ms. Gum Gee Lee whose family was evicted from the building at 1508 Jackson along with seven other families. The same investor previously evicted families from another building in the Chinatown area and sold off their units.

“Greetings everyone. I’m Mrs. Lee. I’m really happy to be here at Jackson Street today, to have an opportunity to reminiscence the place that will always be home in my heart. As someone who lived in this neighborhood for over 30 years, I made many friends. My neighbors were like family. We helped one another. A year ago, San Franciscans, neighbors, friends, workers, elected officials, together, we stood here to protect my home, and to protest and unjust eviction. At the time, I was worried. Every day, I thought where would I live tomorrow, but I continued and kept at it for my daughter so that she would have a place to call home, for my old friends who use to live around here but were evicted, to provide tenants facing eviction in the future with a voice, to move the public to be in solidarity, and for the public to learn more about San Francisco’s housing problem.

Today I am able to stand here because of the community’s support. Although, I had to move in the end, but that momentous event still has a place in my heart. Currently, San Francisco is in a housing crisis. Very few people can afford the City’s increasing rents. It was here that a speculator had bought the building I lived in and used the Ellis Act to evict me with the intention of selling the building as individual units, to reap enormous profits.

Today, I stand here not because I am against people buying homes, nor am I against landlords selling their homes, but it is in my hope that you all will stand with me to stop the flip, to help stabilize our City’s housing prices. I hope that everyone can stand with me to support Proposition G, to pass a tax on real estate speculation, to disincentivize speculators such as the one I had and his speculation, to prevent the eviction of even more San Franciscans. Thank you.”