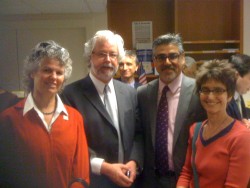 Today’s Budget Committee meeting at the Board of Supervisors will review Governor Schwarzenegger’s latest May revise of the state budget, and what it could mean for San Francisco. It will be depressing, and may cloud the rough budget season ahead with talk of “inevitable” cuts. But at a City Hall rally yesterday, Budget Chair John Avalos joined the Central Labor Council and UNITE-HERE Local 2 (along with four of his colleagues) to file a November ballot measure to close loopholes in the city’s Hotel Tax – and for the first time in 15 years, raise it by 2%. While the Board could put it on the ballot, they plan to collect signatures for it to qualify – laying the groundwork for a genuine grassroots campaign. Even as the City struggles badly with revenue, the Hotel Tax is doing better than expected – and the measure would strengthen the City Attorney’s case against online travel companies who are ripping us off. As Mayor Gavin Newsom runs for statewide office, will he endorse this to prove that San Francisco is advancing solutions?

The Hotel Fairness Initiative – sponsored by a coalition that includes five progressive Supervisors, the SF Labor Council, UNITE-HERE Local 2, Young Workers United, Senior Action Network, SEIU 1021 and Coleman Advocates – does three things. First, it would stop a practice that online booking fees have used to evade $70 million of the Hotel Tax over the past ten years. Second, it blocks a loophole that airlines have used to avoid paying the Hotel Tax. And it temporarily raises the Hotel Tax for four years by two percent (the first time in 15 years), which would cost about $3 per night per patron.

All told, the Hotel Fairness Initiative would bring about $38-45 million a year to the City.

It makes fiscal and political sense. While the City’s overall revenue picture is bleak, the Hotel Tax has been resilient. According to Controller Ben Rosenfield’s 9-Month Status Report, we are $34 million behind where we thought we would be when we passed the budget in July. Property taxes are down due to the real estate market (some downtown landlords are also pleading poverty), and the payroll tax is way down because of high unemployment. Sales tax revenue is also down due to the bad economy. But the Hotel Tax is collecting $18 million more than we expected, and the dip we saw last year is starting to reverse.

At yesterday’s City Hall rally, it was clear that service providers have already sustained years of budget cuts – and modest revenue measures must be part of a global solution. “We cannot sustain any more cuts than we’ve had,” said public school teacher Claire Merced. “City workers have already given back over $100 million [in concessions], and non-profits are being decimated,” said Conny Ford of the Central Labor Council. “We are not going to cut our way out of this budget mess,” said Supervisor David Campos.

Progressives are always quick to push revenue – but it often doesn’t materialize what we hope or expect. In November 2008, voters passed Proposition N – which raised the real estate transfer tax for properties valued at over $5 million – but it was right after the vast majority of Downtown properties had already switched hands. Had it passed five years earlier, it would have generated more revenue – but so far, Prop N’s impact has not been impressive. Only very recently are we finally seeing its fruits, but we need to do more.

Is raising the Hotel Tax by two percentage points good politics? It will only translate to about $3 a night per tourist. As Martha Hawthorne, who emceed the City Hall rally, said “I used to work at the Westin St. Francis. The guests can afford it.” And as many politicians (and I don’t mean just the progressive ones) have said, tourists will still come to San Francisco — even with the hotel tax.

Part of the Hotel Fairness Tax is a no-brainer – and is simply a question of recovering funds that belong to the City. More tourists are making hotel reservations through online booking agencies (such as Priceline or Travelocity), who charge – for example – $150 for a hotel room, and then pay the Hotel $120. These companies contend the Hotel Tax is a percentage of what the Hotel receives ($120), while the City Attorney argues that it’s a portion of what the customer pays ($150.) As a result, the City has lost $70 million in Hotel Tax revenue over the past ten years. The City is currently suing these companies.

The Hotel Fairness Tax would add clarifying language that ensures it is a percentage of what a tourist pays to stay in a Hotel (after all, it is ostensibly a tax on the “market rate.”)

But the voters have to pass this – and while San Francisco is a progressive town, revenue measures don’t do well. In November 2006, for example, City voters passed (a) paid sick leave, (b) a tenants’ rights measure, and (c) a curb on chain stores – but on the same ballot a parking tax got creamed. Because progressives are quick to slap good ideas on the ballot, while not doing the hard work necessary to run a real campaign to educate the voters about it.

John Avalos is being smart about this in two ways. First, it’s going on the November ballot (when the Supervisors are up for re-election), so it requires a simple majority to pass. On any other ballot, it needs a two-thirds vote – which can be the kiss of death.

Second, he’s not just getting four Supervisors to put it on the ballot – even though it’s clear that he could (five Supervisors were at the rally yesterday.) Instead, activists will commit to gather 14,000 signatures for it to qualify. This forces a grassroots campaign that will build an army of supporters, increase the measure’s visibility and then have an e-mail list of campaign volunteers ready to walk precincts for the proposition in the fall.

The only question is – will Gavin Newsom support it? With the state budget making San Francisco’s deficit even worse, expect the Mayor to blame Arnold for much of the budget cuts he will propose on June 1st. At this time last year, I asked him how much he was doing to block Schwarzenegger balancing the budget by “borrowing” local property tax revenue. All he could answer was that the California Association of Counties has a Sacramento lobbyist. As the state budget remains intractable, Newsom should show some leadership at home.

His Democratic rival for Lieutenant Governor – Janice Hahn – has a record of supporting revenue measures in Los Angeles. Last year, the City Councilwoman sponsored a parcel tax to avoid cuts in public school funds. It got 64% of the vote, but needed two-thirds to pass. Gavin could prove to California he can push for local revenue measures – and win.