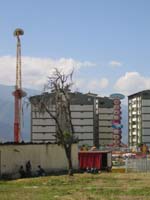 Carnaval fell upon the city of Mérida two weeks ago, bringing with it hoards of people from out of town that descended upon the city like swarms of insects. La Feria del Sol, as Carnaval is called in Mérida, is a festival of rampant consumption, so much so that by the third day the vast majority of the banks in Mérida had run out of money, leaving the hapless visitor struggling to find the few working ATM’s that, tucked in less-trafficked corners of the city, had at least ten to twenty people lined up outside each at all times of the day.

In response to the pervading consumerism of La Feria, the local Chávez groups in Mérida set up an alternative Feria, an exposition in a park uptown, lined with booths on one side from local cooperatives selling handmade clothes, blackberry wine, chocolate liquor and coffee, and other local grown and made goods. Opposite the booths the walkway was filled with large government canvasses and posters with pictures and quotes from figures like Francisco de Miranda and Che Guevara. “Thank you President Chávez for bringing us from the abysses of hopeless poverty!” shouted one canvass in bold black letters next to an outline of Chávez’s face. “Going to battle because Socialism is the only way,” affirmed another.

Quiet and removed from the crowds that flocked to the other parts of the city, the forum was a refreshing change from the madness of the main festival. The exposition was the first place all festival where I did not see a single person drinking; here people perused the shaded booths quietly while tasting the local products, reading information about specific cooperatives, while a group of street children were corralled by a handful of volunteers to a small stage to watch a puppet show. We sat down on the grass to eat a tamale wrapped in banana leaves, enjoying the fleeting tranquility before we returned ourselves to La Feria.

Lasting five days from Friday until Tuesday, Carnaval is a holiday the whole country observes with religious like fervor: even the laws change for the duration of the extended weekend. La Feria in Mérida revolves around the Plaza de Toros, which fills up with people each afternoon for the five days for daily bullfights showcasing some of the best Toreros (Matadors) from both Spain and Venezuela.

La Avenida de Las Americas, the wide road that winds its way up from the bottom reaches of the city to the Plaza del Toros, serves as the veritable artery of the city, thick with people walking, drinking, eating, perusing and purchasing from the various vendors that line the street selling sombreros, water bottles, beer, sangria, blow up stuffed animals, and an endless number of other useless goods.

Of course, the privilege to enjoy all of this was only relegated to those who can afford it, those with el poder, the Spanish word for power and the same word as the verb for can/to be able to.

During Carnaval, it was only those who could that enjoyed $20 leather botas filled with sangria or rum or both, $30 cowboy hats that nearly everyone seemed to have, and $25 seats at the bullfight, from which communities of ranchos could be seen leaning into the hillside in the distance, appearing to almost melt under an intense sun that seemed to focus on the city as if directed by a giant magnifying glass.

And the people who could were brought together with the people who couldn’t, if only for a brief instant, outside the stadium and all the way down La Avenida, where both children and adults waded slowly through the stew of people, quietly asking for change, selling beer and soda out of coolers, tirelessly hawking sunglasses and bracelets under the unyielding sun.

I went to a bullfight on Friday, aware ahead of time that I wasn’t going to like it, but wanting to observe it in action because it is something important here.

A bullfight is based on the completely false pretense that this is somehow a fair fight, that six or seven men with knives, spears, horses and cloaks, hiding behind impenetrable walls, add up to the strength of one bull with nothing but its rage and two horns. Eventually after the henchmen tire and injure the bull enough, the Torero struts out into the plaza, a true man, stepping in only after it is clear that his rival’s strength is depleted. After running around the ring for a handful of minutes, dancing with the Torero, the bull almost always topples over and dies, dragged out of the ring by a two horses while the classical music of the brass band sounds in the background.

Occasionally, if a fight was really good, the crowd demands “las orejas!”, the ears of the bull that the Torero allegedly keeps as trophies after a small, creepy man, dressed completely in black and reminiscent of a middle-ages era executioner, enters the ring to cut them off the dead bull. I only imagine the look on the face of the poor wife or girlfriend that is presented with the trophy of highest honor from their Torero companion.

The bullfight was slightly more grotesque than I had imagined, partially because it seemed to bring out the worst in people. Packed tightly into the small stadium and the vast majority of whom significantly intoxicated, the crowd was demanding and entitled, alternating between chants of “Matalo!” and “Musica!”.

People yelled at those blocking the view in front of them, others threw bottles caps and hurled obscenities; the sense of community and commonality, not to mention the extreme cordiality and politeness that are embraced by this country, completely lost for the spectacle. The culture inside the stadium was palpably atavistic; I couldn’t help but be reminded of some darker, more desperate era of human existence, when cheering death was a more acceptable pastime.

Drinking is by no means relegated to only the Plaza, as alcohol and beer corporations had a nearly omnipresent existence for the weekend, on the streets, inside of businesses, covering the city with fliers, sponsored parties, specials and sales. There were Polar Beer tambores troupes in the streets, Cacique Rum groups drumming in discos, and Solera Light, a subsidiary of Polar Beer, chartered a different bar around the city each night to hold La Rumba Ice, a sponsored party, where highlights included personal beer dispensers, and of course the inevitable- the fundamental unit of corporate advertisement worldwide- scantily-clad, dancing girls. This was not just limited to bars; girls in company gear passed out beverage samples in liquor stores, and one could hardly go anywhere in Mérida without seeing a corporate pick-up trucks trawling slowly around town, uniformed girls dancing in the back to reggaeton that pulsed out of large speakers.

By Tuesday night, the majority of visitors had filtered out of the city, leaving behind only the carcasses of their rampant indulgence; feathers, straw hats, broken bottles, deflated balloons, cases full of empty rum bottles, and in many places, bottle caps that blanketed the ground to form a metallic carpet, littering the streets of what most agree is the cleanest city in Venezuela. And while the cooperative exposition outlasted La Feria by another week, the reminder was clear, that if socialism is the only way, than there remains plenty to battle against.