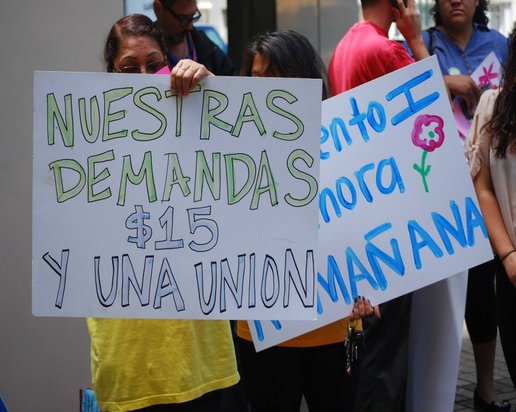 The recent Los Angeles City Council vote to raise hourly pay for 10,000 hotel workers to $15.37 could be part of an historic groundswell to create a new minimum wage across Los Angeles and beyond.

The Los Angeles City Council is expected to soon take up an introductory motion that would raise compensation for more than half a million employees throughout the city now laboring at California’s minimum $9 hourly standard.

Los Angeles Mayor Eric Garcetti, who rolled out the proposal on Labor Day with eight council members at his elbow, commissioned an impact study that calculates some 567,000 workers would benefit from the pay raise by 2017.

Garcetti has proposed a wage of $13.25 an hour, which would result in an annual wage boost of $3,200 per worker. Some advocates are pushing for a higher wage, as well as other provisions including paid sick days and strict enforcement to guard against wage theft.

The analysis by the University of California, Berkeley’s Institute for Research on Labor and Employment (IRLE) shows that most of the affected workers are not teenagers hustling for spare spending money, as opponents frequently argue, but are adults trying to make their rent. According to the study, 97 percent of those who would benefit from a higher minimum wage in Los Angeles are in their 20s or older; of this large group, 59 percent are in their 30s or older.

The report counters the expected “job-killer arguments” with an analysis of past wage boosts showing that costs are absorbed through reduced worker turnover and improved worker performance. “Increased costs may also be offset by the additional spending by low-wage workers and their families, acting as an economic stimulus in local economies,” the analysis’ executive summary says.

The Los Angeles initiative is one example of the trend in states and municipalities across the country to raise local pay standards as a gridlocked Congress remains in stasis, says Ken Jacobs, one of the IRLE study authors. Twenty six states and the District of Columbia have set their minimum wage rate above the federal level of $7.25 an hour.

“It’s a reaction to lack of action on the federal level,” Jacobs says. “You change the road by walking.”

Earlier this year a House of Representatives Republican majority successfully stalled a proposal from the Obama Administration to increase the federal minimum wage from $7.25 to $10.10 an hour. (That proposed raise still adds up to a scanty $21,008 annually — assuming a 40-hour work week for 52 weeks a year, with no paid vacations.)

Actions by fast-food workers across 150 cities nationwide in early September saw hundreds of workers arrested for acts of civil disobedience. Jacobs says the movement sharpened and defined the issue of wage inequality in the public debate and “raised the bar on what was possible and what was needed.”

Nikki Fortunato Bas, executive director of the national network Partnership for Working Families, has a bird’s-eye view of the grassroots economic justice work going on around the country. PWF affiliates (including the Los Angeles Alliance for a New Economy, sponsor of Capital & Main) have been behind local minimum wage efforts in four cities.

“There’s a lot of movement in our cities to raise the minimum wage,” she says. “There’s so much power at that level.”

The West Coast has been on the move – Seattle passed a $15 minimum wage measure last June. Fast-food workers in that city first called for that pay rate when they launched a citywide strike in May 2013. Fortunato Bas says local efforts drive an economic agenda toward equity.

Los Angeles –which passed one of the country’s strongest living wage laws in 1997–joins other California municipalities in launching a local minimum wage effort. A labor-community campaign to raise the base wage for 40,000 workers in San Jose to $10 an hour won support from 60 percent of voters there in 2013. Analysts say the resulting increased local spending boosted the economy by $100 million.

But it’s not a fight you win in a walk.

In July, after a vigorous grassroots campaign by Raise Up San Diego, the San Diego City Council approved a $11.50 minimum wage increase to cover all workers by 2017.

Then the mayor vetoed it. The council overrode him. Minimum wage opponents pressed on. They now claim they have collected enough signatures to put a referendum before voters to strike down San Diego’s minimum wage. The process could potentially delay the pay raise for almost two years if authorities find the signatures valid.

The San Francisco proposal would increase hourly pay to $15 and affect 142,000 workers by 2018. Proponents argue that it will help low-wage workers manage rising rents—now at a median $3,200 monthly– and other costs driven by an influx of highly paid tech workers moving into the city.

Residents fleeing San Francisco prices have Oakland low-wage workers feeling pressure on rents in their neighborhoods. Average rents there have jumped to $1,695 monthly.

“Skyrocketing rents are driving people out,” says Fortunato Bas, who for eight years headed up the East Bay Alliance for a Sustainable Economy, a leader in the Lift Up Oakland coalition backing Oakland’s Measure FF .

The Oakland ballot measure would raise the minimum wage for as many as 40,000 workers to $12.25 an hour. Supporters show up at rallies with signs reading, “It Takes $100 a Day to Live in the Bay.”

Measure FF would not only boost wages, says Fortunato Bas, but would protect workers from “wage theft” practices–policies that allow a worker to clock out at the end of a shift at a fast-food outlet only to be required to spend a couple of unpaid hours cleaning up, or that affect banquet workers who don’t collect the 20 percent gratuity added to a bill and paid for by the consumer.

The proposal would also provide from five to nine annual paid sick days for low-wage workers usually forced to show up at work sick because they can’t afford to stay home.

Fortunato Bas says the added protections reflect how key community-by-community efforts are building policies that work for those affected.

“You’re able to pay attention,” she says. “When you’re working at the city level you are much more in tune with what local people need.”